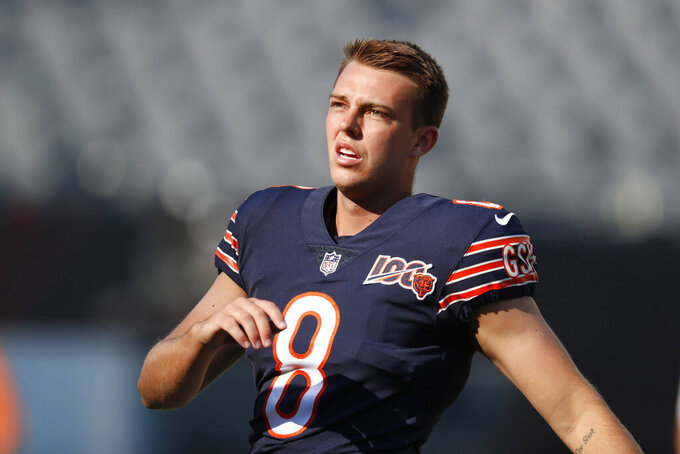 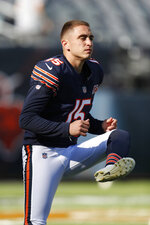 LAKE FOREST, Ill. (AP) — The Chicago Bears' kicking competition is over, for now, with Eddy Pineiro the winner.

The Bears announced Sunday that Elliott Fry was released after an offseason and preseason competition with Pineiro and several other kickers to replace Cody Parkey.

The Bears had been looking for a kicker since cutting Parkey following his "double-doink" field goal miss of 43 yards in their 16-15 playoff loss to the Philadelphia Eagles.

Coach Matt Nagy said Pineiro had not necessarily won the job for the regular-season opener against Green Bay on Sept. 5.

Nagy said it was a good time to make the decision between the two because it gives Pineiro a chance to prove himself before final roster cutdowns by other teams put more kickers on the market.

"Human nature is whenever there's two people for one spot, No. 1, every rep is getting cut in half and then mentally you just don't know," Nagy said. "Now there's a little more clarity.

"Again, it wasn't easy because they were very close. But that's what we decided to do. We're rolling forward with that and now he has two games here to show us what he can do."

Pineiro saw the benefits of the move.

"The way I look at it, I feel like I haven't won the competition," Pineiro said. "Everything's still open. Who knows if they bring somebody else in?

"But it does give me a confidence boost, like OK, I have a shot to be the guy and prove to the coaches that I can be the guy that they want me to be. So yeah, I feel a lot more confident."

Fry was among the first kickers the Bears brought in. At one point, they had nine trying out at Halas Hall in the offseason.

Fry came in after the Alliance of American Football folded. He kicked in college for South Carolina and had kicked in the AAF for Orlando. The Bears acquired Pineiro in a trade with Oakland for a conditional seventh-round draft pick in 2021.

Kicking in practices had been very close, with Pineiro owning a slight edge while displaying a stronger leg. He made a 63-yarder in practice.

Nagy said there initially was no overall plan to make the cut now, but it had simply worked out this way.

"But for right now, we feel good with where he's at. We want him to keep kicking like he's been. But we're always going to keep that thing open."

NOTES: The Bears anticipate guard Kyle Long will practice this week after he was yanked from a Wednesday night scrimmage for fighting, removing the helmet of rookie Jalen Dalton and swinging it. Long didn't accompany the team on the trip to New Jersey to play the Giants, and Nagy said the team wanted to keep any other disciplinary action internal. ... Guard Cody Whitehair injured a finger in Wednesday's scrimmage, but Nagy said he may return to practice this week when the Bears prepare to face Indianapolis on Saturday. ... Tackle Rashaad Coward may miss the game against the Colts due to an elbow injury suffered against the Giants, though Nagy didn't think the injury was serious.