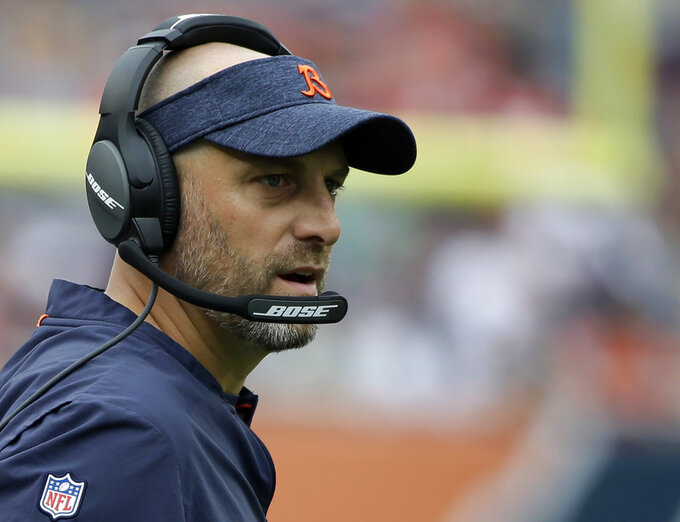 FILE - In this Aug. 25, 2018, file photo, Chicago Bears head coach Matt Nagy watches during the first half of a preseason NFL football game against the Kansas City Chiefs, in Chicago. The Chicago Bears come into the playoffs with an NFC North title after four straight last-place finishes, nine wins in 10 games and a belief that anything is possible in their first year under Matt Nagy. He already has more wins than any other rookie coach in franchise history. More important, he has made Sundays fun again in Chicago. (AP Photo/Annie Rice, File)

LAKE FOREST, Ill. (AP) — The Chicago Bears will wait until right before game time for Sunday's playoff matchup against the Philadelphia Eagles to make a determination on the availability of safety Eddie Jackson.

Jackson was officially listed as questionable Friday on the final injury report after he went through a second straight limited practice. He hasn't had a full practice since before the Dec. 16 game against Green Bay when he suffered a right ankle injury.

"We'll just continue talking to him, see where he's at, but it's literally gonna go right up until (a) game-time decision," Bears coach Matt Nagy said. "If he's good, let's go. If not, then we won't. We're going to be smart with him."

Named All-Pro and to the Pro Bowl, Jackson has been out since making his sixth interception of the season. His pick in the end zone ended Aaron Rodgers' streak of 402 passes without an interception in the Bears 24-17 win over the Packers in mid-December. He was injured with an awkward attempt to stop and down the ball after returning it 13 yards.

Nagy said because of the stakes of the game there's a possibility the Bears will let Jackson play even if he isn't 100 percent healthy. Either way, he said there would be no regrets.

"Probably slightly because it is win or go home," he said. "But yet you have to put both sides, the team and the player, you have to look at it from both sides, and that's the hard part."

Defensive back DeAndre Houston-Carson had sore ribs following Thursday's practice and was held out of Friday's practice. He is questionable for the game.

Bilal Nichols (knee) is also questionable after being held out of Friday's practice as a precaution. Outside linebacker Aaron Lynch (elbow) did not practice and is doubtful.

Wide receivers Allen Robinson II (ribs), Anthony Miller (shoulder), and Taylor Gabriel (ribs) are off the injury report after missing all or part of last week's game. All three went through full practices throughout this week.