Bears see signs of offensive growth even in loss to Chargers 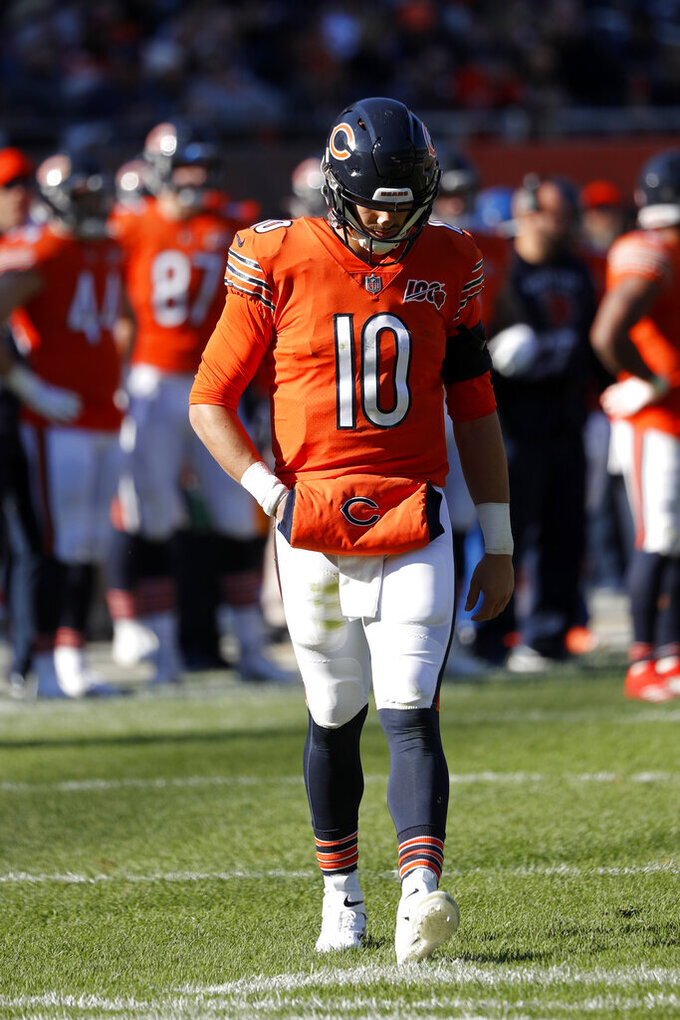 Chicago Bears quarterback Mitchell Trubisky walks on the field during the second half of an NFL football game against the Los Angeles Chargers, Sunday, Oct. 27, 2019, in Chicago. The Chargers won 17-16. (AP Photo/Charles Rex Arbogast)

LAKE FOREST, Ill. (AP) — In gambling terms, Chicago Bears coach Matt Nagy is doubling down on his offense and quarterback Mitchell Trubisky while everyone else is about to fold.

Rather than wring his hands over Sunday's 17-16 loss to the Los Angeles Chargers, Nagy said he sees real signs the offense is about to emerge from a lethargic state.

It could be too late to help the Bears make the playoffs at this point after three straight losses and a 3-4 record, but for any success to happen, Nagy said the team must continue to support Trubisky, who he thinks needs more time to develop because of a lack of experience coming into the NFL.

"You're talking about a kid that he wants it really, really bad," Nagy said. "He truly cares.

"At the same time there's also an accountability."

Nagy acknowledged that a time will soon come when the third-year QB must start to make big plays and consistently move the offense without silly mistakes.

"And I think we're getting close to that," Nagy said. "And he knows that. When I say that, meaning like when there's opportunities to be made, we want to make those. And he wants to make them and he wants to do it.

"But it's the world we live in right now and people want it now. So it is what it is."

Trubisky was 23 of 35 for 253 yards with one interception and a passer rating of 75.1 against the Chargers.

While Trubisky had two critical fourth-quarter turnovers, an interception and lost fumble, he also drove the offense into position to win before a 41-yard field goal by Eddy Pineiro sailed wide left as time expired.

"As a unit right now, we didn't get the win, but we felt there was definitely an improvement," Nagy said.

The real improvement came from rookie running back David Montgomery and a bigger commitment by Nagy to the running attack. The Bears used the I-formation at times Sunday and Montgomery gained 135 yards, more than double his previous high.

"It always helps having that balance as an offense, we're moving the ball, staying on the field, staying in third-and-manageable," Trubisky said. "It definitely helps, and it opened up a lot of things in the pass game, and I know it helps our linemen because they did a great job creating those holes all game, and it gives them confidence running the ball and in the pass game."

The Bears' defense is up and running again after two subpar efforts. It held Philip Rivers to a season-low 201 yards passing and the league's third-ranked passing team had only 11 first downs. The defense also shut down the running game, allowing 36 yards on 12 carries.

It was the way the Bears played in the season's first four games and last year.

"It's going to be huge for us to step up and take over games and dominate games at this point," linebacker Khalil Mack said.

The offense in general has to be better in the red zone. It went 1 for 5 scoring touchdowns on drives inside the red zone against the Chargers.

Montgomery. His 27 rushing attempts were the most by a Bears back since Oct. 15, 2017. Nagy normally doesn't like giving the ball to a running back so many times, but after the running game has struggled all year, he didn't mind it Sunday when it started clicking.

Pineiro. The hero in the Bears' 16-14 win at Denver with a game-ending 53-yard kick not only missed Sunday from 41 yards but also hit the right upright in a miss from 33. He had only one miss on the season coming into the game.

Reserve outside linebacker Isaiah Irving left Sunday's game with a quad injury and didn't return. More will be known on his status later in the week.

77 — The number of plays run by the Bears against the Chargers. That let Chicago pile up 38 minutes of possession time, a luxury the offense needs when it isn't scoring points in the red zone.

The Bears have to try to climb back to .500 at Philadelphia. It was the Eagles and Nagy's good friend Doug Pederson who eliminated the Bears in the playoffs last year on Cody Parkey's double-doink missed field goal. The game will be a reunion of sorts. Eagles running back Jordan Howard played his first three seasons for the Bears.