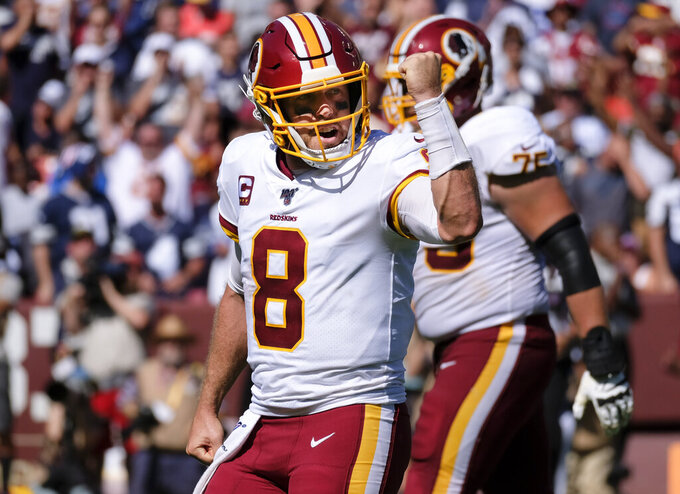 LANDOVER, Md. (AP) — Mitchell Trubisky wants the Bears to believe this will be the week their struggling offense gets going.

It might actually be that week because Chicago is facing a Washington Redskins defense that hasn't been able to stop much of anything.

The Bears (1-1) go into Monday night's matchup with the third-worst offense in the NFL through the first two weeks of the season. Fortunately for them, the Redskins (0-2) rank third-worst on defense and are dealing with some key injuries contributing to that disappointing start.

"They got some openings where we could have some success on offense this week," Trubisky said Thursday. "We've got to believe that this offense can explode at any minute because of the playmakers and the special guys we have in the locker room."

Chicago's offense has produced just one touchdown through two games — a 1-yard-run by David Montgomery last week — and Trubisky is a combined 42 of 72 for 348 yards and an interception. The 2017 second overall pick is near the bottom of the league at 4.8 yards a completion.

"Right now, it's just about getting into that rhythm and then understanding the execution of the plays," coach Matt Nagy said. "And us as coaches, too, making sure that we're putting them in optimum position to make the plays with whatever play call is made. We're not running different plays. We're not running anything different than we did last year. It's a long season."

That's the mantra inside the Redskins' locker room where injuries to defensive lineman Jonathan Allen and cornerbacks Fabian Moreau and Quinton Dunbar have contributed to them getting worn down as games go on. Coach Jay Gruden said it's not time to panic yet, but the defense underachieving is alarming.

Washington has allowed a combined 569 yards in the second half in losses to Philadelphia and Dallas .

Not much is pretty about the Redskins' defense or the Bears' offense so far. Settle mentioned communication as an issue, and first-year Washington middle linebacker Jon Bostic pointed to a lack of cohesiveness on the defensive side of the ball.

A big kick by Eddy Pineiro won the Bears their game last week at Denver, and they're still looking for the big plays that have eluded them.

Some things to watch when the Bears visit the Redskins on Monday night:

MONSTERS OF THE MIDWAY

Unlike the Redskins, the Bears' defense is doing just fine. It's ranked fourth in the league and sixth against the run under new coordinator Chuck Pagano after Vic Fangio left to take the Broncos' head coaching job.

"They're physical in the middle and they have speed at linebacker," Gruden said. "They have good edge play. They have a safety that's a ball hawk. Their corners are pretty good and experienced. They don't really have a weakness in their defense."

Chicago has seven sacks through two games, two off the league lead.

Case Keenum won Washington's starting QB job essentially by default because longtime backup Colt McCoy is still injured and first-round pick Dwayne Haskins isn't ready. But Keenum is far from a problem for the Redskins, throwing for 601 yards and five touchdown passes with no interceptions.

"I'm well aware of Case Keenum and what he can do," Nagy said. "He's obviously having a good year right now. Statically he's protecting the football. He's very, very football smart. So his football IQ is high. He gets the ball out."

The Bears brought in a long line of kickers during the offseason after letting the embattled Cody Parker go following his double-doink miss in the playoff loss to Philadelphia at Soldier Field. They ultimately went with Pineiro, and he just might be winning them over.

He nailed a 53-yard winner as time expired last week after hitting from 40 and 52 earlier in the game and is 4 for 4 this season. The big boot against the Broncos came after Nagy chose to go for a first down on fourth-and-10 in the opener against Green Bay at home rather than try a 51-yarder.

"I'm trying to gain trust from them," Pineiro said. "Now that he's seen me hit a couple 50-yarders, maybe he lets me try a few longer ones. So it's all a trust process. But we work for that moment behind the scenes at practice. Last-second kick, your team loses, we've been doing this for the past four months now."

The Redskins hoped to get matchup nightmare tight end Jordan Reed back last week after being concussed Aug. 23. This is his fifth documented concussion in seven years, Reed didn't practice again Thursday and all possible caution being taken means he could miss the Bears game, too.

"This is all a part of the process of recovering from this ordeal," Gruden said. "We're just taking it very slowly, making sure he goes through the right process to make sure it's right before he goes back on the field."