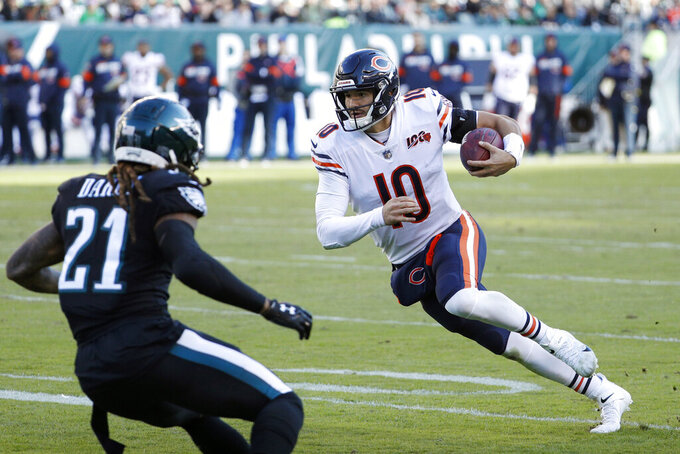 LAKE FOREST, Ill. (AP) — The Chicago Bears hit the halfway point of their season with four straight losses, a 3-5 record and a spot at the bottom of the NFC North. That's quite a change for a team that won the division in coach Matt Nagy's first year.

Instead of positioning themselves to finish on top again and advance in the playoffs after losing the wild card game to Philadelphia, they're in danger of finishing last in the division for the fifth time in six years.

Quarterback Mitchell Trubisky is struggling. The offense appears broken. A defense mostly performing well is also showing some vulnerability. And a season that seemed promising is slipping away.

A 22-14 loss at Philadelphia on Sunday was just another blow. The offense managed just 9 yards in the first half, and the Bears simply couldn't make up enough ground after falling behind 19-0.

Not much is working for the Monsters of the Midway, though they still are stingy when it comes to scoring. The Bears are holding opponents to 18 points per game and were ranked eighth in total defense through Sunday. But they're not dominating the way they did last season.

After leading the NFL with 36 takeaways, they are in the middle of the pack with 11. They're also on pace to finish with fewer sacks, with 23 so far after finishing two shy of the league lead with 50 in 2018.

The Bears have been particularly vulnerable against the run lately, giving up 146 yards or more in three of the past four games; they did that once last year.

The Bears expected to take a big step on offense in Nagy's second season. What they didn't envision was it being a big step backward.

Trubisky looks rattled. A line that figured to be strong is getting pushed around. The run game has largely been ineffective when it hasn't been ignored. And besides Allen Robinson, the receivers aren't delivering.

It all seems to have added up to a lack of confidence in his players from Nagy, whose creative calls were a benchmark last season. Against the Los Angeles Chargers two weeks ago, he opted to take a knee with about 40 seconds left rather than try to get closer to the end zone. Eddy Pineiro then missed a 41-yard field goal as time expired, sealing a 17-16 loss. And on Sunday, Nagy called for a punt on fourth-and-6 at the Eagles 44 late in the third.

If Nagy doesn't trust his offense, it's not hard to see why. The Bears ranked 29th overall, 30th in passing and 27th in rushing through Sunday.

"We've done some different things, we've tried different things," Nagy said. "And we feel like in some areas we've gotten better and others we haven't. I don't feel like it's handicapped me at all, but I do feel like it's not where we were last year. That's the part that bothers me. I want to make sure I do everything I can to do what I know we can do with these players."

With 47 catches for 532 yards and three touchdowns, Robinson is well on his way to exceeding last year's totals of 55 receptions for 754 yards and four TDs in 13 games.

The biggest story surrounding the Bears is the poor play of Trubisky, the former No. 2 overall draft pick in his third season. His completion rate (63, yards per game (173.9) and yards per attempt (5.6) are down. He has thrown five touchdown passes after finishing with 24 a year ago, and his rating has dropped from 95.4 to 80.

The Bears placed two key players on injured reserve last month, with right guard Kyle Long (hip) out for the remainder of the season and defensive tackle Akiem Hicks (elbow) possibly returning in December. Both are former Pro Bowl players — Long from 2013-15 and Hicks last year.

The Bears have a reasonably favorable upcoming schedule with two games against Detroit (3-4-1) and one against the New York Giants (2-6) in their next four.