For Bears, there’s work to do after sloppy win over Giants 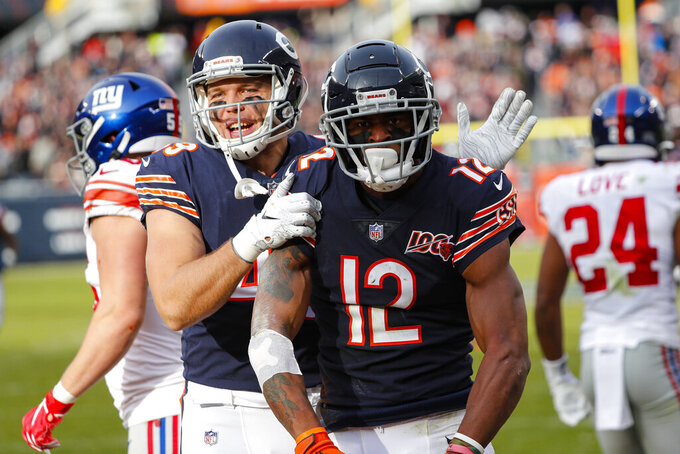 LAKE FOREST, Ill. (AP) — Nothing pretty about it, but a win nonetheless. Naturally, that’s what mattered most to the Chicago Bears.

The defending NFC North champions have work to do after a less-than-inspiring 19-14 victory over the struggling New York Giants on Sunday.

The Bears (5-6) made too many mistakes. They struggled early again on offense. They averaged just 2.5 yards per run. They scored just one touchdown in four trips to the red zone, and they failed to get 20 points against a team giving up 28 per game.

Despite all that, they bounced back from a loss to the Rams in Los Angeles and won for the second time in three games. Up next is a Thanksgiving matchup at struggling Detroit.

“We are just taking it week to week, win by win,” defensive tackle Nick Williams said. “We just need to start stacking the wins. We are playing with all the confidence in the world. We know we can come back and get some wins.”

The defense. The Bears continue to rank among the stingiest teams in the NFL, particularly when it comes to opponents’ scoring. They’re giving up just 17.1 points per game and have held opponents under 20 in eight of 11 games, including four of the past five.

Mistakes. The Bears kept getting in their own way against the Giants. A miscommunication between quarterback Mitchell Trubisky and Allen Robinson led to an interception by Alec Ogletree in the end zone late in the first quarter. Robinson had a 60-yard reception in the second wiped out when center Cody Whitehair got flagged for illegal use of the hands. Robinson also got called for interference away from the ball on a 2-point conversion attempt in the third period following a touchdown that Khalil Mack set up with a strip-sack. It was part of messy sequence in which the Bears had to use a timeout prior to the conversion attempt because they were not lined up properly. The penalty against Robinson backed them up for a 43-yard extra point, but an illegal substitution pushed them back again. It all led to a missed 48-yard PAT by Eddy Piñeiro and a 19-7 lead.

“Probably the biggest thing when you get into those situations is making sure that the communication amongst everybody, you got to be spot-on,” coach Matt Nagy said Monday.

Mack. Held without a tackle at Los Angeles, Mack gave the Bears the lift they needed with his strip-sack. The three-time All-Pro ran around left tackle Nate Solder and nailed Daniel Jones from behind. Chicago took over at the 3 after Williams recovered the fumble, and Trubisky scored on a 2-yard run. The sack was just the second in seven games for Mack.

Tight end Ben Braunecker. The Bears had a first down at the 29 in the first quarter when a wide-open Braunecker dropped a potential touchdown. The drive ended four plays later with Trubisky getting picked off in the end zone for the first of his two interceptions. Braunecker had two catches for 9 yards.

131 — Robinson caught six passes for 131 yards, the sixth-highest total of his career and second most for him in two seasons with the Bears. He had 133 yards against Detroit last November at Soldier Field.

The Bears go for their third win in four games when they visit the Lions. Chicago hung on after a late charge by Detroit with Jeff Driskel filling in for injured quarterback Matthew Stafford to come away with a 20-13 victory and snap a four-game losing streak on Nov. 10.