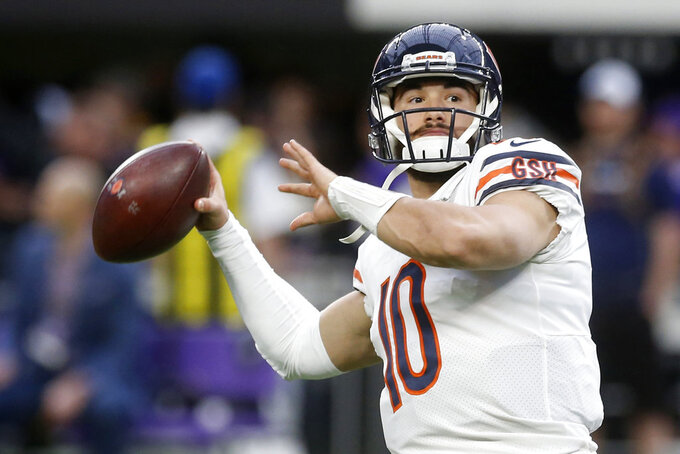 LAKE FOREST, Ill. (AP) — It hasn't been a streak of accuracy on a level with Aaron Rodgers, Drew Brees or Tom Brady. Nevertheless, Chicago Bears quarterback Mitchell Trubisky has eliminated interceptions over his past three starts.

Whether Trubisky can continue making good decisions and throws in his first playoff game at Soldier Field against the defending Super Bowl champion Philadelphia Eagles could go a long way toward determining if the Bears' season continues.

"I think I've gotten better through the course of the season," Trubisky said, "just continuing to make adjustments, making those split-second decisions and just continue to get better and be critical of myself when I don't and learn from those mistakes."

Trubisky suffered through a difficult three-interception game in the Bears' 15-6 win over the Los Angeles Rams, when he returned from a two-game absence because of a shoulder injury.

After a third-quarter interception, Bears coach Matt Nagy went entirely to the ground game the rest of the way. Since then, Trubisky has become deadly accurate and clutch.

"He just handles adversity," Nagy said. "He knows how to run this offense now. He's at a point right now where when he calls a play in the huddle, he can start looking at the defense rather than looking at the offense."

Trubisky went 63 of 83 for 644 yards with three touchdown passes and no interceptions for a passer rating of 109.7 in wins over the Packers, 49ers and Vikings.

Nagy called it a matter of coaches figuring out what plays and formations Trubisky performs best and knows best.

"I think he's finally starting to really understand who we are becoming as an identity within this offense," Nagy said.

So Nagy has some advice for Trubisky heading into his first postseason game, as the Bears try to take advantage of an Eagles pass defense ranked 30th in the NFL.

"To not change, for him to continue to do just what he does," Nagy said. "Last week, he had a little bit of a test of it, and I thought he did a great job handling the situation."

The 24-10 win at Minnesota on Sunday featured some of Trubisky's best play on third down. He accounted for seven third-down conversions. And he did it against the NFL's best third-down defense.

"We all have our trust in him," running back Tarik Cohen said. "We've seen him make the best of plays when times didn't look so bright. Just the things he can do with the ball, his arm and including his feet, it's amazing to watch."

Trubisky's running ability on third down has been a big key. He has run for 421 yards this season and acknowledges he's even surprised by his own ability to escape the pocket at times.

"I always try to have eyes in the back of my head, have my head on a swivel, take care of the football and make smart decisions," he said. "But it's pretty cool in some situations you can escape from."

Burton reeled off a list of Trubisky's recent improvements.

"Some of the throws he's been able to make," Burton said, "some of the plays he's gotten us into from an offensive standpoint, some of the times when teams are blitzing and the way he's able to scramble, some of the intangibles that not too many guys have in this league, I mean you see him show up."

Trubisky's development came about after plenty of self-criticism, especially after the Rams game.

"Those are great learning experiences," Trubisky said. "And those were instances where I just came back was critical of myself, watched the film and really figured out how I could change my mindset and do a better job in practice during the week just getting prepared."

The baby-faced Trubisky is sporting a playoff beard these days, as are all the Bears quarterbacks. It took a while, though. He started growing it the first week of the season.

It seems an unusual time to start thinking playoffs.

"I had faith," Trubisky said.

The same could be said for Nagy's belief in his quarterback's development in the face of sporadic criticism. Now he has a quarterback not turning over the ball and converting third downs.

"When you do those things big picture-wise, you're in good shape," Nagy said.