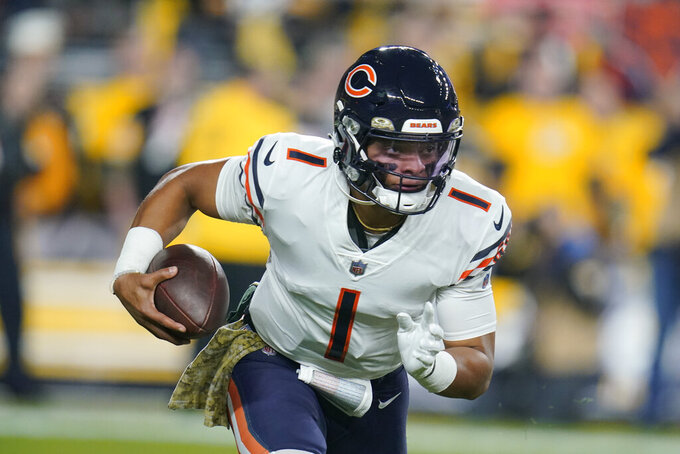 LAKE FOREST, Ill. (AP) — After establishing their passing game in a failed comeback against the Pittsburgh Steelers, the Chicago Bears and quarterback Justin Fields anticipate setting a trend Sunday against the Baltimore Ravens.

Following the coaching staff’s work over the bye week at self-scouting, Bears coach Matt Nagy called improvement obvious. They have even escaped last place in the NFL in total offense, a position they held for seven straight weeks.

The Bears see their offense operating more efficiently, and not only because of Fields’ play but because numerous offensive changes throughout the early season have slowed down to a trickle.

“You had a couple games of Andy Dalton and then you have Justin coming in,” Nagy said. “We had the tough game against Cleveland where numbers-wise was a big-time outlier, whether it’s sacks or not getting enough yards or points, etc., you can go across the board. So you look at that.

Fields’ improvement has been the big change, though. He had been throwing shorter and targeting fewer receivers, but against Pittsburgh the ball went downfield more to five players and to a full complement of targets.

“I think it just gives not only me but the offense confidence,” Fields said.

Fields completed six passes of 20 yards or longer against Pittsburgh, a season high for longer completions. In the second half of the game, Fields completed 12 of 18 for 228 yards and a touchdown, after he’d been 5 of 11 for 63 yards in the first half with an interception.

“We definitely want the explosive passes and it opens up a lot of things," Mooney said. “Just being able to do those help the defense respect us, even deep-threat wise, knowing that we can make those plays. It gets them on their toes a little bit and that’s all we need, just a little slight edge over them.”

Seeing momentum on the side of the passing game, Nagy hopes to add in what the Bears saw on film during the bye week to complement Fields.

“And now, as we start to see and do our self-scout, we see that he is getting better in a lot of different areas because of the games that he’s getting and the experience that he’s getting,” Nagy said. “So we understand that.

“But that said, we as a team, for instance on offense, we know areas that we need to improve on.”

Another reason they’re optimistic about the offense is the possible return of depth — and even a starter — on the offensive line in tackle Teven Jenkins.

Nagy announced Monday the three-week window has begun with Jenkins at practice in order to evaluate whether he will return from injured reserve to the 53-man roster. The Bears initially slated the second-round draft pick to start at left tackle, but he has been on IR since August, when he had back surgery.

“We’ll see how he is,” Nagy said. “He’s a competitor. You all saw that when we drafted him. You see the type of mean streak he has. You see how much he loves football, how much his teammates really appreciate him and he appreciates them.

“So I think what will happen is it will all just play itself out as we go here and see how things are.”

NOTES: Nagy said the three-week window on safety Deon Bush’s return from injured reserve has also begun. Bush suffered a quad injury a month ago. ... The Bears reported nothing definitive about the foot injury that kept Khalil Mack sidelined in the last two games, nor the hamstring injury Eddie Jackson had early against San Francisco on Oct. 31, other than to say the coaches will have a defensive plan in place taking into account having both players back or neither on the field.