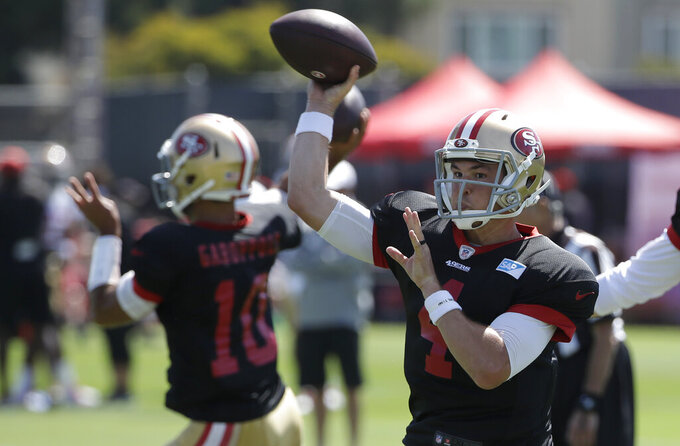 Coach Kyle Shanahan isn't saying which one will start.

Shanahan told KNBR Radio in San Francisco that the reps have been even for Beathard and Mullens, who are competing to back up Jimmy Garoppolo. "I wouldn't say anyone has the edge, because I don't want to go there yet," Shanahan said.

Both are entering their third season with the 49ers. Mullens was an undrafted free agent in 2017 who spent more than a full season playing free safety on the practice squad, while Beathard was a third-round draft pick in 2017.

Beathard has started 10 games with the 49ers, during which San Francisco went 1-9.

"He's got to really learn how to stay healthy," Shanahan said. "Sometimes, your biggest strength is your biggest weakness. C.J. is as tough and fearless as anyone I know. That's why he keeps his eyes down the field and why he can read coverages and get the ball to the right spot. But, sometimes you've got to be a little scared, or at least see that big guy coming to hit you so you can avoid him and protect yourself."

Beathard took a pounding during his five starts in 2018 and injured his right wrist. Mullens replaced Beathard in Week 9 against the Raiders and kept the starting job the rest of the season. The team went 3-5 with him at the helm.

"Everything I was doing last year as far as going through progressions and trying to put the ball in the right spot, all of that stuff, I'm seeing it one step quicker," Mullens said Thursday.

Mullens is known for his quick decision-making, and Beathard is known for his toughness. Neither has a particularly strong arm so both trained during the offseason with quarterback guru Tom House, who specializes in throwing mechanics.

"The biggest thing is just learning how the entire body connects when you throw, how you can use your lower body and your hips to create more velocity on your throws," Mullens said. "Those guys gave me a lot of really good tips and I'm engraining them in my mind every day."

Both Mullens and Beathard have been searching for an edge. They say the competition has brought out the best in them.

"There's no letting up," Mullens said. "If you're engrained as a starter, you might not do the couple extra reps. But since you know you have a guy right there trying to get the same spot you have, you always have that urge. Somebody is fighting for the same spot you want. It has been a lot of fun."

NOTES: Nick Bosa will miss the entire preseason with "some components" of a high ankle sprain, according to 49ers general manager John Lynch. The 49ers hope Bosa will be ready for Week 1. ... RB Jerick McKinnon suffered a setback in his attempt to return from an ACL injury and will miss roughly the next two weeks.

By Tom Withers just now
By The Associated Press 8 minutes ago
By Dennis Waszak Jr. an hour ago
By Arnie Stapleton 8 hrs ago
By John Wawrow 8 hrs ago