Beckham calls trade to Browns surreal and a blessing 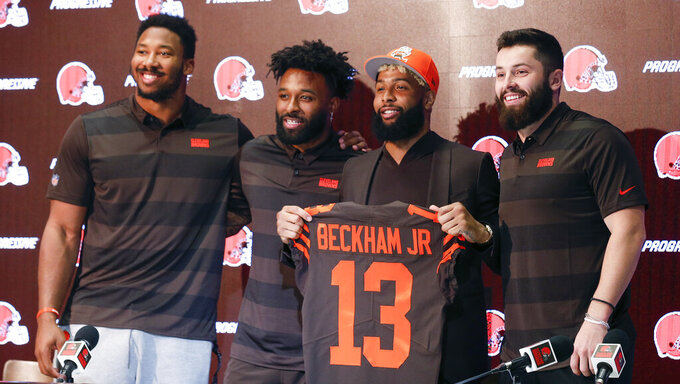 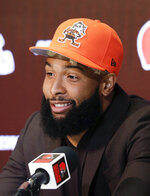 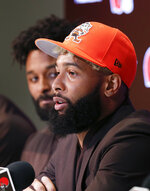 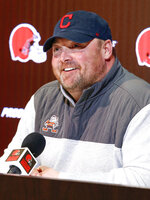 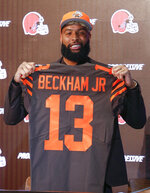 BEREA, Ohio (AP) — Odell Beckham Jr. looked at quarterback Baker Mayfield seated to his left, Jarvis Landry to his right and Myles Garrett at the end of the dais.

"This can't be real," Beckham said, a tuft of bleached blond hair poking out from under his orange cap.

This was no April Fools' Day joke.

His drama-filled days in New York behind him, Beckham was introduced Monday by the Browns, whose acquisition of the former Giants star wide receiver has triggered wild expectations for a team that didn't win one game two years ago.

Beckham said he was initially shocked by the blockbuster trade — Cleveland sent guard Kevin Zeitler, safety Jabrill Peppers and a first- and third-round pick this year to New York on March 12 for Beckham and edge rusher Olivier Vernon — but he has grown to embrace it over the past few weeks.

"I think I've come to grips with everything," Beckham said, discussing his big change in an overflowing media room at the team's headquarters. "It'll be one of the best things that ever happened to me in my life."

His close relationship with Landry has helped Beckham's transition. The pair has been friends since meeting at a football camp while in high school, and after attending LSU together, the two have talked endlessly about being teammates in the NFL.

Their dream is a reality in Cleveland.

"We spoke this into existence," Beckham said. "Him and I dreamed of this. This is something that we talked about at 17, 'I'm going to live right down the street from you. We're going to be on the same team.' Everything, and it's like surreal."

Beckham, who spent five sometimes turbulent seasons with the Giants, said it was important for him to report right away to the Browns' first offseason conditioning program under new coach Freddie Kitchens. His life is still in upheaval due to the trade, but he wanted to get off on the right foot with his new teammates.

Moments later, he again gazed at his new teammates — Landry, the sure-handed pass catcher who joined the Browns last year and Mayfield and Garrett, two former No. 1 overall picks who have made the Browns relevant — and smiled.

"I think this moment is going to be more iconic than we all realize," he said.

In Landry and Beckham, the Browns have two of the league's top receivers, a combination that might keep defensive coordinators awake at night.

Mayfield joked that his job may have gotten easier.

"I'll probably just close my eyes and throw it and hope one of them catches it," he said.

Beckham said that after he learned he was headed to Cleveland, he called LeBron James and asked the NBA superstar about the area.

"He gave me a little bit of advice," Beckham said. "He just said: 'You're going to love it, you're going to love Cleveland.' I said, 'I can't wait.' That's like my idol, so it's the person I look up to the most, that's my guy. To see what he did to bring a championship here, I just want to be able to do that same thing."

The 26-year-old Beckham said he greeted Kitchens, who was hired by the Browns in part because of his bond with Mayfield, with a big hug and told him he loved him.

"It's like a love story," quipped Kitchens, who feels there are misperceptions about Beckham. "The thing that I think gets misconstrued a little bit with Odell is that he loves people and he loves to play the game. I truly feel like he loves being around his teammates. As a coach, sometimes you look at the team as your family, but at the end of the day, we are not family.

"Family you are related to by blood. But there is a brotherhood so to speak in the locker room. I think with a lot of good players, they want to just feel that sense of brotherhood and compassion, and the passion that he brings to the field is kind of contagious."

Beckham, who clashed with Giants coach Pat Shurmur and always seemed surrounded by distractions, knows there are those who feel he's selfish, a diva.