Beckham vague about future with Browns amid 'bad' season 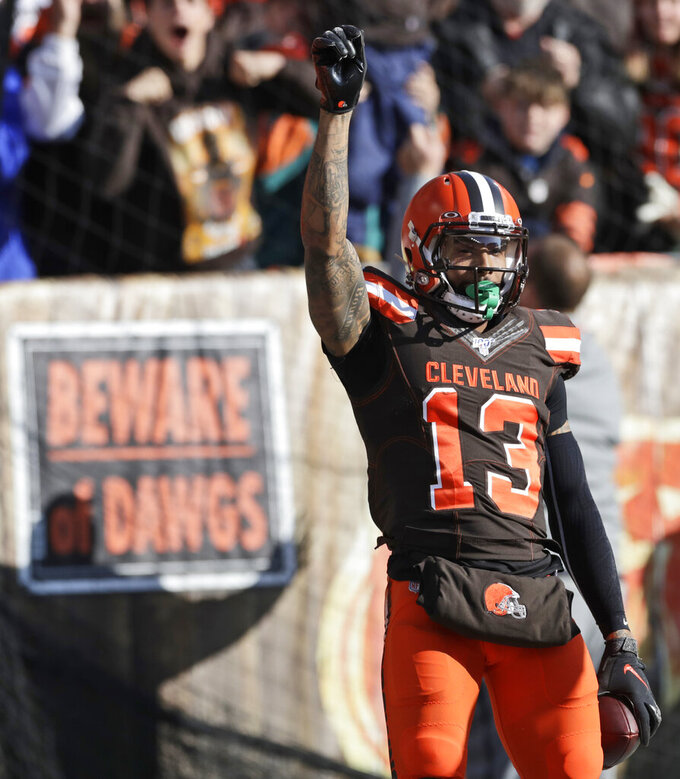 Cleveland Browns wide receiver Odell Beckham Jr. (13) celebrates after a touchdown during the first half of an NFL football game against the Miami Dolphins, Sunday, Nov. 24, 2019, in Cleveland. (AP Photo/Ron Schwane)

BEREA, Ohio (AP) — Odell Beckham Jr.'s disappointing first season with the Browns isn't even over, and the star wide receiver is already making predictions about the next one.

He didn't say if it would be in Cleveland.

Beckham was vague about his future on Thursday during a post-practice interview session in which he discussed his maturity as a person and player and the Browns' growing pains amid unfulfilled expectations.

However, Beckham, who has not had the impact he or the Browns (5-7) had hoped, wouldn't squelch rumors that he might not be with the team on a long-term basis.

Asked if he wanted to be with Cleveland next season, Beckham, who is under contract through 2023, gave a muddled answer.

“No one knows what the future holds tomorrow," he said. “I couldn’t tell you what’s going to happen. My locker is right beside one of the men (teammate Jarvis Landry) that means the most to me in the world. I think about just being able to come to work and see him every single day and how special this could be. I couldn’t sit here and tell you whether I’m going to be here, want to be here, don’t want to be here — this is exactly where I’m at now and I wouldn’t rather be anywhere else.

“In the offseason, everything will figure itself out. I feel like I’ve been here before, answering questions about the next team when I’m on a team already. That’s just something I’m going to tune out for right now. Catch me in the offseason, and we’ll see what happens. I don’t know God’s plan.”

Although Beckham is under contract and the Browns would not be likely to cut him, he could request a trade if he wants out.

One of the NFL's most dynamic playmakers, Beckham hasn't been able to consistently deliver the kind of game-breaking moments this season that have helped define his career.

He's got 57 catches for 805 yards and just two touchdowns. Beckham has also gone six consecutive games without topping 100 yards for the first time in his career.

The Browns have not been able to get him the ball in the red zone, and there have been numerous times when it's looked as if he and quarterback Baker Mayfield were studying different playbooks. In Cleveland's biggest game of the season last week at Pittsburgh, Beckham had just three catches for 29 yards.

To his credit, Beckham hasn't publicly complained about his lack of production, and swears his only goal is to win.

“Ï’m going to get 1,000 yards," he said. “And this is a bad year. I tell people when we talk about 1,000 yards — that’s the minimum, that's the starting point. ... As far as touchdowns and other stats, I don’t see that so much happening. And right now that’s really not what’s important. I just care about winning and hopefully getting a shot to go to the playoffs — the wildest wild card or whatever. If they just let us in there.

“All the stats, that’s been out the window for me. I’m just trying to finish the season strong with the most wins we can possibly have.”

The spotlight is always on Beckham, and he usually does his best to keep it trained on him. Although he hasn't had his usual impact on the field, Beckham has nonetheless stirred up some drama this season by being fined for wearing an expensive watch or being asked by officials to remove an illegal visor and cleats.

He's been outspoken on some NFL rules, but hasn't been nearly the distraction he was in his final seasons with the New York Giants, who traded him to Cleveland in March.

Beckham said he's learned from past mistakes, and rather than lash out through his actions, he's kept things bottled up, under control.

He knows there are always going to be critics, but he's trying to ignore them.

“There’s definitely been a concerted effort by me just to keep myself in check, know that everyone is watching. Like I said, they want to see me mad or throw a helmet or punch a cooler or hug a kicking net and hit the kicking net," he said. “They want to see those things and like I told you, it’s just on me and I’ve made that effort, that decision, that choice to not allow that no matter what’s going on.”

Beckham's reputation as a diva preceded him to Cleveland. However, Browns coach Freddie Kitchens said the 27-year-old has been a terrific teammate.

“Odell has not been a problem at all," Kitchens said. “Really, if it was not Odell, we would not be even asking these questions about that kind of outlier type stuff. Odell has been fine. He has been good. Helps everybody, helps the young guys. Baker and Odell have a good dialogue. Everything is good.”