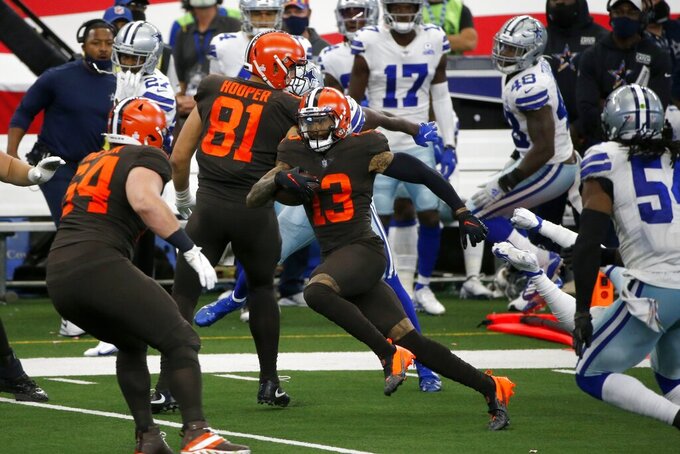 CLEVELAND (AP) — With the game slipping away, the Browns lined up and snapped the ball from atop the giant blue star in the middle of the field at Dallas' AT&T Stadium and handed it to one of their stars — the sometimes flickering one who on this day was shining brightly.

Beckham's dazzling, 50-yard touchdown run on a reverse in the fourth quarter Sunday capped his first three-TD performance in five years and helped seal Cleveland's 49-38 over the Cowboys, moving the Browns to 3-1 for the first time since 2001.

It may have been a rebirth of sorts for the talented and polarizing wide receiver, whose injury-slowed first season with the Browns didn't go as he hoped, and whose place among the NFL's elite players had come into question.

The touchdown hat trick, which began with a TD catch off a trick-play pass from LSU teammate Landry, may have signaled that Beckham is back.

“I've just been waiting,” Beckham said Thursday on a Zoom call. “I know what I can do. I know what I am capable of. Just trying to find ways to keep this train rolling.”

Beckham's talent is undeniable; it's all the other stuff that has gotten in his way. When he's healthy, the 27-year-old can transform a short gain into a long one, turning routine into remarkable.

"He's a bouncy athlete,” said Browns coach Kevin Stefanski, "and he finds a way to go get footballs. It is very impressive.”

Beckham's skills were on full display on his game-icing TD. After taking the handoff from quarterback Baker Mayfield, Beckham was forced to veer off course by closing Cowboys end Aldon Smith and had to retreat to Cleveland's 36.

Once he avoided Smith's lunging tackle attempt, Beckham turned the corner, found a seam and some blockers near on the sideline and jetted into the end zone to bail out the Browns, who had let a 27-point lead shrink to 3.

Landry, Beckham's best friend, said it all happened “in a blink of an eye.”

“Listen,” Landry said. "I have not seen plays like that in the NFL in a long time. Only special guys make those type of plays. He is very special. That is something that we are going to continue to need out of him for the rest of the season.”

An ardent music fan, Beckham said he recited a lyric by Jay-Z — “Please allow me to reintroduce myself” — to one of his coaches in describing his performance.

“For the ones that are out there that love to hate," he said.

Indianapolis coach Frank Reich, who will see Beckham this Sunday as the Colts (3-1) visit the Browns, said OBJ looks more than OK.

“He does look back to normal to me,” Reich said. “When I was in Philadelphia for a couple years, I coached against him and got to see just how dynamic of a playmaker Odell is. He can stop and start on a dime but yet still has the speed to go the distance. He has unique instincts in the pass game and with the ball in his hand. He can hurt you in a lot of different ways.”

Since the start of training camp, Beckham has been different.

He's healthier after undergoing surgery on a core muscle injury that bothered him all last season. And unlike last year, when his wearing of an illegal visor and cleats, along with rumors about his unhappiness in Cleveland after being traded by the New York Giants, Beckham hasn't been a distraction.

No drama. No pain, either.

“I had to really strain heavy last year,” he said. "I did not want to run any faster than I needed to. I am definitely stronger, faster this year than I was last year. I am just all around healthier.”

Landry, who knows him as well as anyone, said it's been a long time since he's seen Beckham so content or focused.

“Probably college,” Landry said. “Last year, he was dealing with a major injury that obviously he had to have surgery and coming into a new system, a new team and all of these things, I think that that weighs on you and weighs on anybody.

“He has handled it well. This year, I think his body has kind of calmed his mind down from all the things that he had going on that he can go out here and perform at a high level each and every time he takes the field.”

Beckham's 50th career TD came off a pass from Landry, who was playing in his 100th consecutive game. It's the kind of moment they've dreamed of making together, and based on how he's feeling now, Beckham feels like there could be many coming.

"This is probably one of the best spots I have been in,” he said.

NOTES: T Sheldon Richardson (thigh) returned to practice. DT Larry Ogunjobi (abdomen) and LB Tae Davis (elbow) were still out. ... Landry said his side finally feels better after his rocket throw to Beckham. “I literally had like two of the worst days of my life with my lat.” he said. "It was sore as hell.”