Belichick can break tie with Halas on wins' list vs. Bears 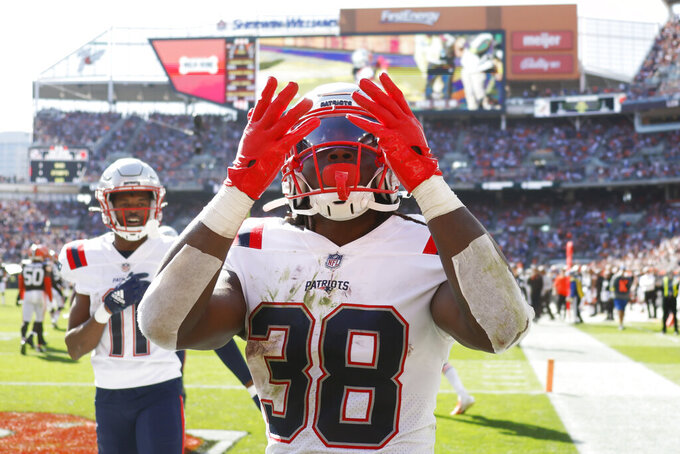 New England Patriots running back Rhamondre Stevenson (38) celebrates after a touchdown run of over 30 yards against the Cleveland Browns during the first half of an NFL football game, Sunday, Oct. 16, 2022, in Cleveland. (AP Photo/Ron Schwane)

OPENING LINE: Patriots by 7 1/2, according to FanDuel Sportsbook.

TURNOVER DIFFERENTIAL: Bears minus-2; Patriots plus-1.

BEARS PLAYER TO WATCH: QB Justin Fields. Fields, whose left shoulder was bothering him, completed 14 of 27 passes for 190 yards and a touchdown against Washington after setting career highs in completion rate (71.4 %) and passer rating (118.8) the previous week against Minnesota. He was sacked five times and absorbed 12 quarterback hits behind a shaky line, not to mention the pounding he took running 12 times. He also threw a 40-yard touchdown to Dante Pettis and scrambled 39 yards to the 5 near the end of the game, putting Chicago in position to pull out the win.

PATRIOTS PLAYER TO WATCH: RB Rhamondre Stevenson. He leads the team with 448 rushing yards and is averaging 5.1 yards per carry. He is also tied with Damien Harris with a team-leading three rushing TDs. He has been a steadying presence for the Patriots’ offense and will need to be again whether QB Mac Jones returns to the lineup or not.

KEY MATCHUP: Bears secondary vs. Patriots receivers. The brightest spot for Chicago has been the play of a secondary that is allowing only 178.7 yards per game, has more interceptions (five) than TDs passes allowed (four), and is holding opposing quarterbacks to a 79.9 rating. It will put the onus on whoever is under center for the Patriots to produce. Expectations are higher for rookie Bailey Zappe coming off his best performance since being thrust into the starting role. It will also be a challenge for Jones if he’s back in the lineup for the first time since Week 3.

KEY INJURIES: Bears top CB Jaylon Johnson (quad) returned last week after missing three games. ... WR N’Keal Harry (ankle) could make his Bears debut against his former team. Drafted by the Patriots in the first round in 2019, Harry never developed into the playmaker they hoped he would become and was traded to Chicago in July. ... Patriots QB Mac Jones appears to be getting closer to a return from the left ankle he injured late in their loss to Baltimore on Sept. 25. that has sidelined him for three consecutive games. ... DL Lawrence Guy has been out the same stretch with a shoulder issue. ... Key special teamer Cody Davis was placed on injured reserve this week with a knee injury.

SERIES NOTES: The Patriots have won the past five matchups. Chicago is 0-2 in its only two trips to Gillette Stadium. The lone playoff game between the teams was the Bears’ 46-10 rout in Super Bowl 20. Since then, New England has won eight of the past nine meetings. Chicago is one of three teams New England is undefeated against at home during the regular season. The Patriots are 4-0 against the Bears, 5-0 against Houston and 5-0 against Jacksonville.

STATS AND STUFF: The Bears have three straight losses by a combined 20 points. ... The Bears had their second-highest rushing total last week with 238 yards. Though Fields had 88 of them, Khalil Herbert had a 64-yard run and David Montgomery carried 15 times for 67 yards. ... Chicago ranks 28th in red zone efficiency at 46.7% after going 0 for 3 for the second time in three games. Last week, the Bears became the first team in 23 years to fail to score on at least three goal-to-go drives in a single game. Cincinnati had four such drives in a 22-0 loss to Baltimore on Dec. 26, 1999. ... Herbert is averaging 6.4 yards per carry — tops among NFL running backs. It’s the second-highest average by a Bears RB through Weeks 1-6 since the start of the 1970 season. In 1972, Bobby Douglass averaged 7.7 per attempt with 475 yards on 62 carries. ... Rookie DB Jaquan Brisker had his second sack last week. … With 324 wins (including playoffs), Patriots coach Bill Belichick is tied with Bears founder and former coach George Halas for the second-most wins by a head coach in NFL history, trailing only Don Shula (347). Belichick can take sole possession of second place with a victory Monday. ... Belichick is also tied with Shula (Miami) for the most victories (257) with one team. Halas also tops that list with 318. ... Mac Jones has a passer rating of 95-plus in three of his past four starts against NFC opponents. … QB Bailey Zappe completed 24 of 34 passes for 309 yards, two TDs and no INTs for a 118.4 rating last week against Cleveland. The performance put him alongside Dan Marino (1983) and Andy Dalton (2011) as the only rookies in the Super Bowl era with a 100-plus rating in each of their first two starts. ... Five different Patriots have a receiving TD this season. ... LB Matt Judon is tied for second in the NFL with six sacks. ... CB Jalen Mills has two INTs and needs one more this season to match the career high he set in 2017 with Philadelphia. ... DL Deatrich Wise matched his career high with his fifth sack last week. ... S Devin McCourty is one of four active players with at least 30 interceptions (31). He trails only Baltimore’s Marcus Peters (32) for the most by an active player.

FANTASY TIP: It could be another big day for New England’s Judon, who has had at least one sack in five of the Patriots’ six games this season. The Bears are tied with the Washington Commanders with an NFL-high 23 sacks allowed this season.