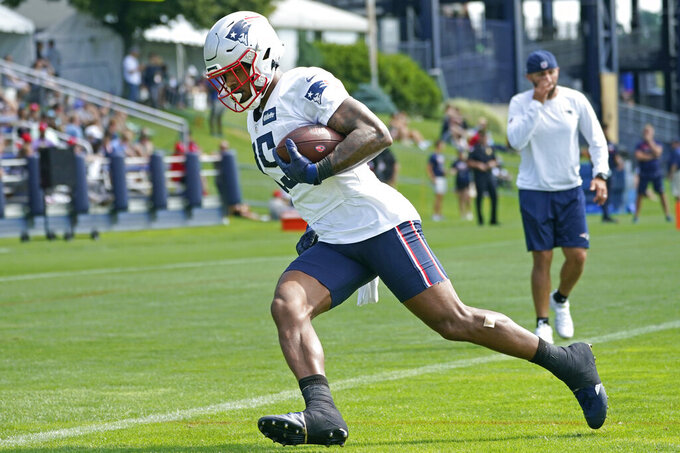 FOXBOROUGH, Mass. (AP) — What N’Keal Harry’s future ultimately will be with the New England Patriots is an evolving question.

But coach Bill Belichick said Monday there remains an open dialogue following the recent request by Harry’s agent asking that the third-year receiver be traded.

“N’Keal and I have talked about it,” Belichick said. “I think we had a good conversation. We have a good relationship, so not going to get into all that.”

It was a tone echoed by Harry on Friday when he was asked about the reason behind making the trade request.

“I’m a Patriot right now. I’m very OK with being a Patriot,” Harry said. “Right now, I’m at a New England Patriots training camp and I’m just trying to make sure I can do everything I can to fit in with my teammates and do anything I can to help this team win.”

Harry had his 2019 rookie season disrupted before it really even began after he sustained an ankle injury in the first preseason game and spent a chunk of it on injured reserve, appearing in seven games.

In his first two seasons, the first-round pick has logged 21 games and been targeted 81 times, totaling just 45 catches for 414 yards and four touchdowns.

It’s hardly the kind of production the Patriots envisioned when his selection made him the first receiver selected in the first round during Belichick’s 21-year tenure in New England.

Marquise Brown, the only other receiver drafted in the first round in 2019, has played in 30 games and caught 104 passes for 1,353 yards and 15 touchdowns.

Harry insisted there was no awkwardness between himself or the team when he showed up to camp last week following the July 6 statement by his agent, Jamal Tooson.

In fact, he said he was “excited” to see the team add receivers Nelson Agholor and Kendrick Bourne during free agency. The production of both has dwarfed Harry’s over the past two seasons and they are favorites to make the roster at this point.

That would leave Harry to contend for a spot with a remaining group of receivers that includes Jakobi Meyers, Gunner Olszewski, Isaiah Zuber and seventh-round pick Tre Nixon.

It won't be easy.

Meyers made the team as an undrafted rookie in 2019, catching 41 passes. He then shined in 2020, with team highs in targets (81) receptions (59) and yards (729). Olszewski has become an integral part of special teams, serving as the lead punt and kick returner.

Harry said he hasn’t considered a position change and thinks he still has an opportunity to have a regular role in the offense.

“Yeah, definitely,” he said. “I feel like we have so many good players on this team and I feel like at some point, at one point or another, we’re going to be able to make a difference and I’m just trying to make sure I can fit in somewhere.”

One thing vaccine availability and the subsequent loosening of restrictions at team facilities during training camp has helped to bring back is the return of traditional rookie rites of passage that have been a part of NFL culture for years.

For the Patriots, that meant the rookie night talent show to end the first week of practice. It consisted of members of this year's rookie class staging skits to entertain the veterans. This year’s group put on a variety show of sorts in which each rookie imitated a veteran counterpart.

The star, apparently, was Mac Jones playing the role of Cam Newton.

“They killed it,” defensive back Jalen Mills said of the rookies’ show. “Mac, he came in dressed as Cam. He had the big hat on, he had the scarf on, came in, saying Cam’s slogans, different things like that. It was real funny to see him get out of character.”

Receiver Kendrick Bourne said the impressions across the board were executed well.

“I think it was pretty spot-on, with all those guys,” he said. “I don’t know if they want to do that again. Definitely spot-on. They hit home, for sure. Funny.”