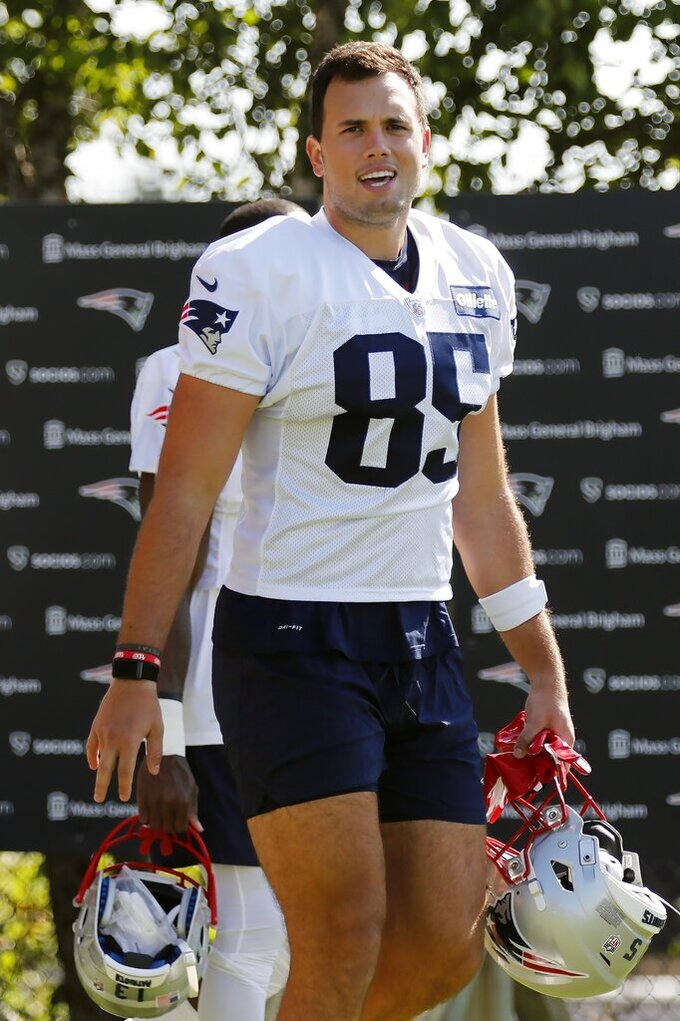 FOXBOROUGH, Mass. (AP) — One of the most significant upgrades for the Patriots offense this offseason was at tight end with the additions of free agents Jonnu Smith and Hunter Henry.

Their production on their previous teams — 121 catches and 10 touchdowns between them over the past two seasons for the Titans and Chargers — instantly conjured up comparisons to the “Boston TE Party” tandem of Rob Gronkowski and Aaron Hernandez that the Patriots had from 2010 to 2012.

But for the second time this summer Smith and Henry's integration into New England's system has been slowed by injury after Henry left the Patriots' first practice of the week Sunday with a shoulder injury and subsequently sat out workouts on Monday and Tuesday. Henry's absences come roughly two months after Smith sustained a leg injury during New England’s first minicamp practice in June.

Smith missed the remainder of those workouts but was healthy in time for the start of training camp.

Now, it's Henry who is sidelined, though when asked Tuesday, coach Bill Belichick's level of concern was low about Henry potentially falling behind.

“Hunter has participated in everything he’s been able to do since he’s been here," Belichick said. “He’s gained a lot of experience in the time that he’s been here. I would say he’s day-to-day.”

Though Henry appears to have avoided a significant injury, it was just part of a busy weekend of transactions for the Patriots at tight end.

In addition to Henry's injury, the Patriots also placed Dalton Keene on injured reserve Saturday and activated Devin Asiasi off the reserve/COVID-19 list.

Asiasi said he's still working with the training staff to improve his strength but said the dynamic overall among all the tight ends on the field and in the meeting room has been good. He thinks the experience brought in by Henry and Smith has been helpful to the entire group.

“I think we’re all focused on playing our roles, and I think we all have contributions to make to the team," Asiasi said.

Belichick said that missing time at this point typically won't be a detriment to a new player learning the offensive system.

The good news in Henry's case is that the Patriots have yet to play a preseason game and he still has about a month before New England is scheduled to open the regular season at home against Miami on Sept. 12.

“As players improve and they can do more, then we can gradually work him into things,” Belichick said. “It’s a little different than the regular season where guys go on different lists. The return process is a little bit different than what it is in training camp because either you’re getting a guy ready to play or you’re not, and if you’re not, then it’s how much time do you want to spend with him when somebody else is actually going to be playing there in the game, so he's day-to-day.”

“Just building that chemistry, feeding off each other when we’re making plays. Bringing that two tight end set and just trying to take it to another level, man," Smith said. "You keep making each other better. Putting that work in every day and getting to know each other on and off the field, it’s just been great.”