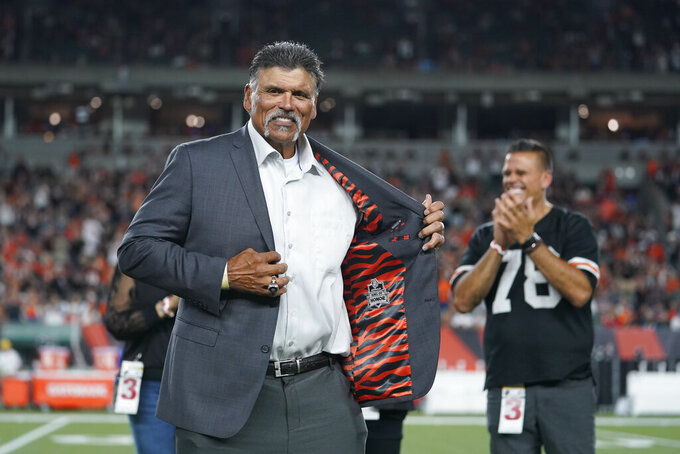 FILE - Former Cincinnati Bengals' Anthony Munoz holds open his jacket during a "Ring of Honor" ceremony during an NFL football game between the Bengals and the Jacksonville Jaguars, Sept. 30, 2021, in Cincinnati. Players from the 1988 Bengals Super Bowl team are reveling the success in the current team, which is playing in the AFC championship game Sunday, Jan. 30, 2022, in Kansas City. (AP Photo/Michael Conroy, File)

CINCINNATI (AP) — C.J. Uzomah caught a touchdown pass in the Bengals' wild-card playoff win and broke into the “Ickey Shuffle," an end-zone celebration dance so famous there's a whole Wikipedia page devoted to it.

Uzomah was paying homage to Ickey Woods, who starred as a rookie running back for the Bengals in 1988 and helped propel the team to the Super Bowl.

The Ickey Shuffle — a side-to-side, step-and-hop sort of thing — made its way into TV commercials and sitcoms while becoming a beloved slice of the history of end-zone celebrations.

The tribute by Uzomah on Jan. 15 led to a parade of fans busting out their versions of the "Shuffle” on social media. Woods, who lives in Cincinnati and goes to every Bengals home game, is enjoying a revival of his celebrity.

“I loved it, man,” Woods said. “I just wanted to tell that young guy thank you for the shoutout and for honoring me. He got to be the ruler of the jungle.”

Woods, like every other Bengals devotee, is fired up about the 2021 team earning a trip to the AFC championship game against the Kansas City Chiefs on Sunday, one step away from another Super Bowl. Finally.

“Any time you make the AFC championship, man, your city is going to be on fire,” he said. “And that’s what these guys are right now."

Hall of Fame tackle Anthony Muñoz, who went to the Super Bowl with the 1981 and ’88 Bengals, also lives in Cincinnati and can’t leave the house without hearing shouts of “Who Dey!”

“I see an excitement that I haven’t seen in years in years,” Muñoz said.

Woods recalls similar hysteria surrounding the '88 Bengals as they prepared for the conference title game at Riverfront Stadium on Jan. 8, 1989. He rushed for two touchdowns in the 21-10 win over the Buffalo Bills, but the Bengals lost the Super Bowl to the San Francisco 49ers.

“They're playing on a platform many of them hadn't played on,” Woods said of the current team. “You've got a lot of guys on that team who came from championship (college) teams so they know what it's like to win. They've bred that winning spirit into this team, and they're getting it done. Joe Burrow said this is the norm for us now."

Muñoz, 63, noted that the 1988 Bengals were coming off a terrible season when they turned it around and went from worst to first in the division, just like the 2021 team.

Muñoz credits then-coach Sam Wyche with fostering unity among the players by changing up roommate assignments and making players from different backgrounds live together.

“I remember going to camp and Sam saying, 'We're having a little change here. No more rooming with your buddy. We're going white (with) Black, offense (with) defense, offensive linemen (with) defensive backs,'” Muñoz said. “He did that purposely. And I really believe that brought the team together quickly in camp.”

Muñoz said he recognizes that kind of chemistry in the current team fostered by coach Zac Taylor and his insistence on a culture of selflessness.

“They've become a team,” he said. “You look at just what they do on the field. You've got three stud wide receivers, and if one gets it the other two guys are busting their tails to block for them. And it's like everybody's that way.

“The thing that I see are guys that have bought into believing in each other and doing things for each other on the field, talking about each other in a way that you see a team, not just a group of talented individuals, but a team. And I think that’s been the key.”

Muñoz also sees similarities in the leadership of the quarterbacks, Boomer Esiason in '88 and Burrow in '21, and their ultra-confident approach.

Woods rushed for 1,066 yards and 15 touchdowns in the 1988 regular season and would never be that good again. He's certainly better known for his end-zone celebration than a playing career cut short by injury in 1991.

On Sunday he'll be just another Bengals fan.

“I think they’ve got a great team right now, man," Woods said. "These guys are playing on all cylinders. They're playing together.”

Uzomah, by the way, got mostly thumbs down from teammates on his version of the Shuffle, which he punctuated with some more modern moves from an end-zone dance known as the Griddy.

“I probably should’ve practiced for sure, because that was not well done," Uzomah chuckled. “But hey, I got in the end zone.”