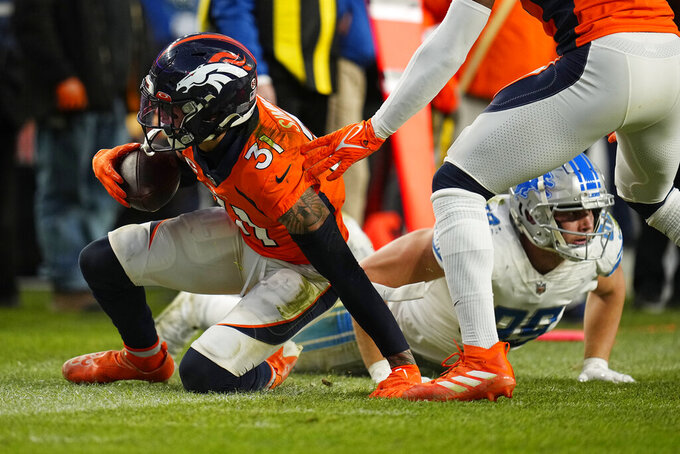 Denver Broncos free safety Justin Simmons (31) makes an interception against the Detroit Lions during the second half of an NFL football game, Sunday, Dec. 12, 2021, in Denver. (AP Photo/Jack Dempsey)

LINE: Broncos by 2½, according to FanDuel SportsBook.

TURNOVER DIFFERENTIAL: Bengals minus-4; Broncos plus-1.

BENGALS PLAYERS TO WATCH: WR Tee Higgins has three 100-yard games in a row after playing in the shadow of Ja’Marr Chase most of the season. Higgins had 114 yards against both the Steelers and 49ers sandwiched around a nine-catch, 138-yard game against the Chargers.

BRONCOS PLAYERS TO WATCH: TE Noah Fant. After a slow start, the third-year pro is starting to string together big moments both in the passing game and as a blocker in Denver’s ruthless ground game. He leads the team with 53 receptions and his three TD catches are one shy of the team leader, WR Tim Patrick.

KEY MATCHUP: Cincinnati running game vs. Broncos’ top-10 run defense. RB Joe Mixon had a couple of great games right after the bye and has a dozen TD runs and two TD receptions. But he’s been bottled up the last two weeks. With RT Riley Reiff (ankle) going on IR on Thursday, Mixon could find the yards harder to come by.

KEY INJURIES: Reiff won’t play Sunday after injuring the ankle last week. Isaiah Prince will start for the Bengals in his place. DT Trey Hendrickson (back) is day to day. LB Logan Wilson (shoulder) won’t play but could return for the Baltimore game Dec. 26. CB Chidobe Awuzie went on the reserve/COVID-19 list Thursday. ... Broncos DE Dre’ Mont Jones is dealing with a foot injury that has him 50/50 for Sunday. ILB Kenny Young is in concussion protocol and first-year pro Jonas Griffith is preparing to become the seventh starter at the position for Denver this season.

SERIES NOTES: The Broncos have dominated the series, especially in Denver, where they’re won 13 of 16. But the Bengals won 20-17 in their last visit in 2017 when Andy Dalton threw three TD passes and the defense contributed two takeaways. It snapped a 10-game losing streak in Denver for the Bengals and marked Cincinnati’s first win in Denver since 1975. The Broncos’ loss came just 48 hours after GM John Elway called his players soft, an insult that was met by both anger and acknowledgement from a team that would lose eight consecutive games, its longest drought since a nine-game skid in 1967.

STATS AND STUFF: QB Joe Burrow is coming off his ninth career game (out of 23) with 300-plus passing yards, tied for the fourth most by a QB in his first two seasons. He’s thrown multiple touchdown passes in five of his last six road games. ... Mixon has reached the end zone in nine of his last 10 games and ranks second in the NFL with 1,036 yards rushing. ... Rookie WR Ja’Marr Chase had two TD catches last week and has a TD catch in five of six road games so far. He’s the fifth rookie in the Super Bowl era to top 1,000 yards receiving with 10 touchdowns. ... If Hendrickson’s sore back allows, he could become the second player since 1982 with a sack in 10 consecutive games in a single season. Chiefs DT Chris Jones had an 11-game sack streak in 2018. ... Broncos QB Teddy Bridgewater has six games this season with a 70% or better completion performance, including last week against the Lions. Bridgewater hasn’t thrown an interception in five of his last six starts and he’s aiming for his fifth consecutive home game without throwing an interception. ... RB Melvin Gordon rushed for 111 yards and two TDs last week. He ran for 88 yards in his only career game against the Bengals, in 2015 while he was with the Chargers. ... Javonte Williams ranks third among the league’s rookie running backs with 1,022 scrimmage yards. ... WR Courtland Sutton, the Broncos’ Ed Block Courage Award winner for his comeback from a torn ACL that sidelined him in 2020, had 85 yards receiving and a TD the last time he played the Bengals in 2018. ... S Justin Simmons had his fifth interception of the season last week. He’s picked off passes in three of the Broncos’ last four games at Empower Field at Mile High. ... Simmons and Patriots DB J.C. Jackson are only players in the league to get five or more interceptions in both 2020 and 2021. ... Dre’Mont Jones had a season-high two sacks and batted down a fourth-down pass last week.

FANTASY TIP: Although the Bengals have the league’s fourth-ranked run defense, Gordon and Williams are on pace for 971 and 955 rushing yards, respectively.