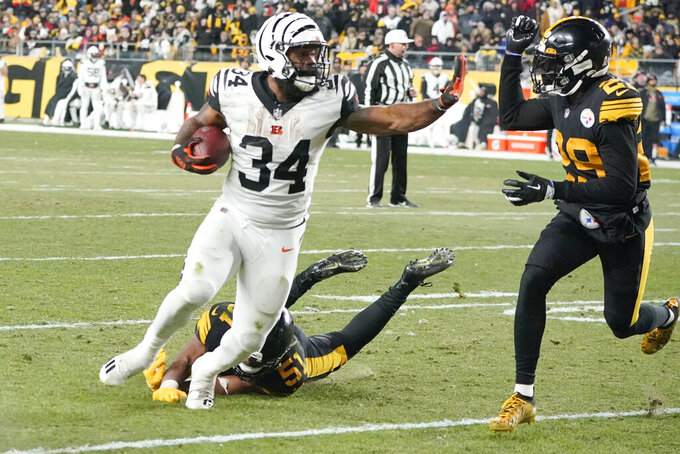 CINCINNATI (AP) — Cincinnati quarterback Joe Burrow said Sunday's 37-30 win over the Steelers was “one of my favorites since I've been here.”

Despite being without receiver Ja'Marr Chase and losing running back Joe Mixon to a concussion, the Bengals took control in the second half.

The third-year quarterback liked how it went down.

There were scoring drives of 92 and 93 yards. Backup running back Samaje Perine caught three touchdown passes, and Trenton Irwin, who was promoted from the practice squad for the game, caught the first TD pass of his career.

The defense forced five punts and a turnover on downs in the second half.

"Man, just all day, just overcoming adversity, fighting through, finding ways to get yards, get first downs, put points on the board," Burrow said.

Cincinnati has won four of its past five games and improved to 6-4, one game behind the Baltimore Ravens in the AFC North.

“I think we’re playing as good as anybody,” Burrow said. “We’re hitting our stride offensively.”

Burrow completed 24 of 39 passes for 355 yards on the day he became the third-fastest player in NFL history to reach 10,000 passing yards.

His composure and focus were on display in a 93-yard drive in the fourth quarter that ended with a 6-yard TD pass to Perine, extending Cincinnati's lead to 34-23 with 4:30 remaining.

Tyler Boyd made critical catches of 27 and 15 yards to keep the chains moving during the drive.

That, Bengals coach Zac Taylor said, “really put the game away for us.”

Burrow continues to adapt and just find ways to win. The offensive line battled a tough Steelers front and gave Burrow time to throw when he started looking deeper down the field in the second half. ... Cincinnati's defense allowed only a field goal in the second half until the Steelers managed another touchdown with 45 seconds left in the game.

Burrow had several short passes knocked down at the line, and Steelers linebacker T.J. Watt miraculously reached up and picked one right out of the air. Burrow had another interception on a tipped ball.

Perine doubled his number of career touchdown receptions with scoring grabs of 29, 11 and 6 yards. The seven-year pro caught four passes total for 52 yards and rushed for another 30 yards. It was the first time a Bengals running back had three receiving TDs in a game in franchise history.

“You know, it’s every role you ask him to play, he’s going to do it,” Taylor said. “Whether it’s the second half, feature back when Joe’s out, whether it’s playing his role on third down, or some of the other packages we put him in, he’s just as reliable as they come. Very dependable.”

Mixon, who scored five touchdowns in Cincinnati’s win over Carolina before the bye week, had 20 rushing yards on seven carries and caught three passes for 42 yards before going out with a concussion.

3 — Field goals made by Cincinnati's Evan McPherson on three attempts. The kicks of 45, 54 and 44 yards not only were important to the game, but showed “Money Mac” is back on track after some misses in the past few games.

The Bengals will need to be at their best when they travel to face AFC South-leading Tennessee (7-3) next Sunday. The Titans, winners of seven of the past eight, beat the Packers 27-17 on Thursday.