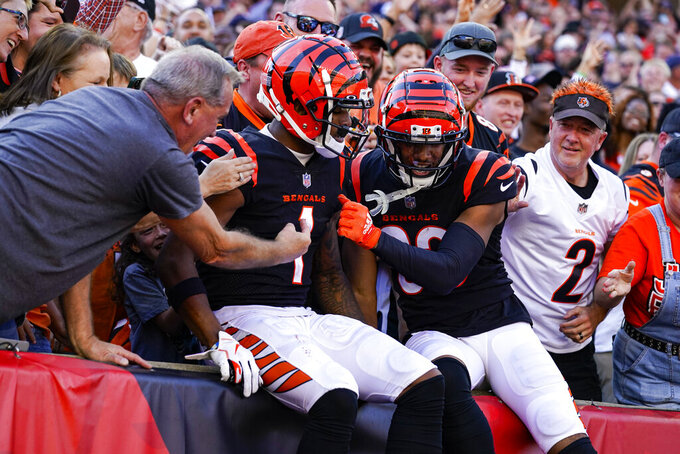 Cincinnati Bengals wide receiver Ja'Marr Chase (1) celebrates his touchdown with wide receiver Tyler Boyd and fans in the first half of an NFL football game against the Atlanta Falcons in Cincinnati, Sunday, Oct. 23, 2022. (AP Photo/Jeff Dean)

A person familiar with the situation told The Associated Press on Thursday that Chase's injury could keep him out several weeks, but Taylor wouldn't go that far Friday and wouldn't say if the team planned to put Chase on the injured list. The person spoke to the AP on condition of anonymity because the Bengals are not commenting on Chase’s condition.

“He's going to miss some time, and he will make a full recovery,” Taylor said after practice Friday afternoon. “So that's all the information I have. We have a couple more days this week to make decisions on IR, things like that.”

Chase did not practice Thursday or Friday as the Bengals (4-3) continued preparing for Monday night’s game at Cleveland.

Chase was initially bothered by the hip in Cincinnati’s Oct. 16 game at New Orleans. He played in last week’s win against Atlanta, finishing with eight catches for 130 yards and two touchdowns.

The loss of Chase for any period would be a blow for the defending AFC champions, who have won four of five following an 0-2 start. If Chase has to go on IR, he would be out a minimum of four weeks.

In his second season, the 22-year-old Chase has 47 receptions for 605 yards and six TDs. As a rookie, Chase, who played with Bengals quarterback Joe Burrow at LSU, had 81 catches for 1,455 yards and 19 scores.