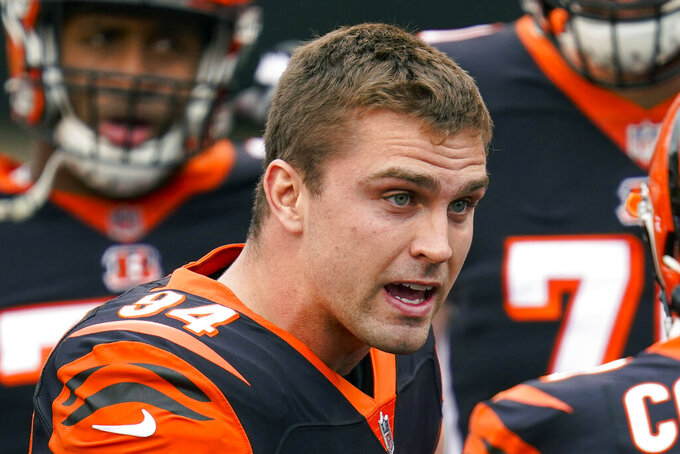 FILE - Cincinnati Bengals defensive end Sam Hubbard (94) talks with a teammate before an NFL football game against the Dallas Cowboys in Cincinnati, in this Sunday, Dec. 13, 2020, file photo. The Bengals on Monday, July 26, 2021, announced a four-year contract extension for Hubbard.(AP Photo/Bryan Woolston, File)

Hubbard, a Cincinnati native who played at Ohio State, was entering the fourth season of his rookie deal. A third-round draft pick (77th overall) in 2018, he's played in played 44 career games and has 16 1/2 sacks, third most among all players from his draft class.

The 26-year-old Hubbard has been the full-time starter at right defensive end since 2019. The deal was announced Monday, two days before the opening of training camp.

“Sam Hubbard is the kind of guy you want on your football team,” Bengals owner and president Mike Brown said Monday. "He has sound ability, but he's really a good person. He's an example for the other guys. He does everything the right way."

Hubbard was one of the few constants in 2020 on a defensive line that was in turmoil because of injuries and infighting.

“He's consistent every single day with his approach, the players look to him for leadership," Cincinnati coach Zac Taylor said. “They look to him to make plays. He really sets the tone in everything that we do, so to be able to reward a player like that who's truly earned it is a fun thing to do.”

The team is working on a similar extension for safety Jessie Bates, who has become a cornerstone of the Bengals' defense, according to Duke Tobin, the team's director of player personnel. Bates, 23, had 109 tackles, 15 passes defended and three interceptions in 2021.