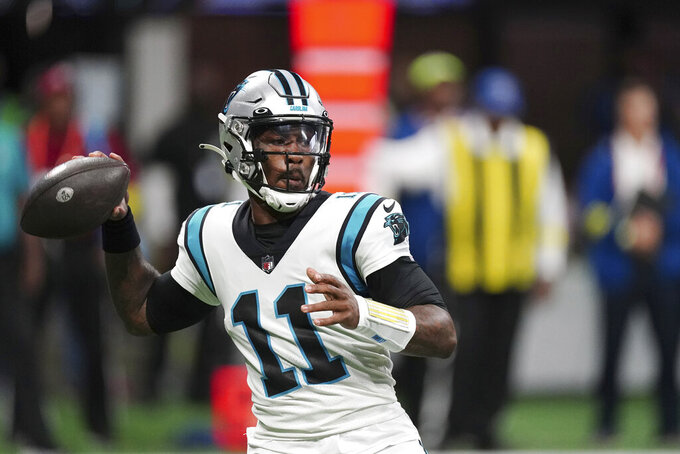 Carolina Panthers quarterback PJ Walker (11) throws during the first half of an NFL football game against the Atlanta Falcons Sunday, Oct. 30, 2022, in Atlanta. (AP Photo/John Bazemore)

CINCINNATI (AP) — Even with star receiver Ja'Marr Chase on the shelf with an injury, quarterback Joe Burrow believes the Bengals can get going this week against the Carolina Panthers and maintain it through the second half of the season.

After all, the third-year quarterback reasons, that's generally what happened last year when Cincinnati got hot in the second half and went all the way to the Super Bowl.

“Down the stretch, that's what we were so good at last year — finding ways to win,” Burrow said. “It might not be pretty, but we found ways. And we've got to get back to that, in those ugly, tough, divisional (matchups), the games on the road where things might not be going great for you.

"You've got to find ways to win those games, and this year we haven't.”

The latest debacle was Monday night in Cleveland, when nothing was working for the Bengals (4-4), who got monster-mashed by the Browns 32-13 on Halloween.

Cincinnati had won four of its previous five and seemed to be building some steam.

“That was one of those games that, man, we couldn’t get things going our way, and we’ve got to put it behind us,” coach Zac Taylor said. “It’s not indicative of who we’re going to be the rest of the season, and (we've got) a chance to grab some momentum at the end of this week.”

The Panthers (2-6) had stunned Tom Brady and the Tampa Bay Buccaneers 21-3 on Oct. 23 only to turn around and lose an overtime heartbreaker to Atlanta 37-34.

"As I just told those guys, ‘It’s a lot of football left,’ said Steve Wilks, who was named interim coach when Matt Rhule was fired last month. “The opportunity for us to win this division is still there. We’re not going to look ahead. We’re going to still stay the course.”

Former XFL quarterback P.J. Walker makes his fourth straight start for the Panthers as he continues to hold off competition from Baker Mayfield and, by extension, Sam Darnold, who is healthy and ready to return from injured reserve.

Walker beat the Bucs 21-3 in Week 7 and should have been the star last week after completing a 62-yard TD pass to D.J. Moore that tied it at 34 with 12 seconds remaining. However, Moore took off his helmet after the catch to celebrate and was flagged for unsportsmanlike conduct, costing the Panthers 15 yards. That turned a 33-yard extra point into a 48-yarder, which Eddy Pineiro missed. The Panthers went on to lose the game in OT.

Wilks said Walker is the starter for now, but made no promises moving forward -- which is OK with Walker.

“For me, that’s the best thing you could ask for,” Walker said when asked if he had been given any assurance the starting job was his. “I’ve got a chip on my shoulder every time I step on the football field, and that’s how I’m going to carry it moving forward.“

It's safe to say the Bengals are a little short on cornerbacks at the moment.

Their best, Chidobe Awuzie, suffered a season-ending knee injury against the Browns. Other veteran cornerbacks also are battling injuries, including Eli Apple and Tre Flowers, both with hamstring issues. Cincinnati is going to have to rely heavily on rookies Dax Hill and Cam Taylor-Britt to pick up the slack.

“That’s where the depth in the room really has to step up," Taylor said. “And it’s a group we’re confident in. They need the experience, so they’re going to get some experience.”

COMMITTED TO THE RUN

Wilks has made a commitment to the running game and D’Onta Foreman is the beneficiary of that. The journeyman running back has run for 118 yards in each of the last two games and had three touchdowns on the ground last week against the Falcons.

Foreman fits the identity Wilks has strived to create since the departure of Christian McCaffrey — a bruising, physical back who can wear down a defense.

“He creates problems as the game goes on,” Wilks said. “Having to tackle somebody like that, particularly when he can get to the second and third level, those DBs don’t want to make that contact and tackle big backs like that.”

Carolina is also expected to get running back Chuba Hubbard back this week from an ankle injury.