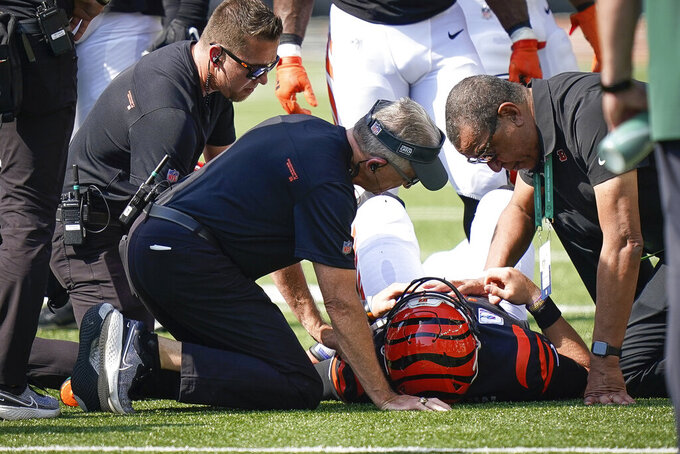 Cincinnati Bengals quarterback Joe Burrow is tended to by the medical staff after being injured on a play in the first half of an NFL football game against the Green in Cincinnati, Sunday, Oct. 10, 2021. (AP Photo/Bryan Woolston)

CINCINNATI (AP) — Cincinnati Bengals quarterback Joe Burrow is healthy and expected to play Sunday after suffering a bruised throat during the loss to the Green Bay Packers on Sunday.

Burrow was taken to the hospital afterward as a precaution but wasn't admitted, coach Zac Taylor said Monday.

“I think he was just having a little difficulty talking, but as the night went on he was better, and as he woke up this morning he came right to the facility and was ready to go," Taylor said.

Burrow wasn't sure when he took the hit to his throat, Taylor said. The quarterback was sacked three times and hit at least eight more times. He absorbed a monster hit from two Packers at the end of a second-quarter run that kept him on the ground for an extended period, but he came out for the Bengals' next offensive series and didn't miss any time.

The game ended 25-22 on an overtime field goal by Mason Crosby, who had already missed three times on potential winners. The Bengals play at Detroit this week.