Bengals ride big first half to shocking win over Steelers 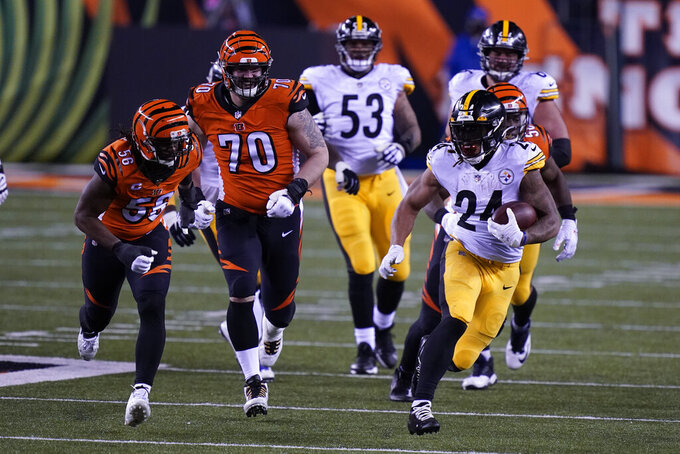 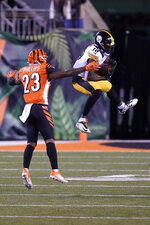 CINCINNATI (AP) — The Pittsburgh Steelers' December swoon is looking more like a collapse.

The Steelers lost their third straight — getting thumped 27-17 by the last-place Cincinnati Bengals on Monday night — after ripping off 11 straight wins to start the season. They couldn't generate any offense early, and the opportunistic Bengals took advantage of their mistakes.

Assured of a playoff berth, the Steelers (11-3) could have wrapped up the AFC North with a win but instead turned the ball over three times and allowed Cincinnati to build a 17-0 halftime lead.

“We’ve got a lot of work to do,” Steelers coach Mike Tomlin said. “We’re not a good football team right now.”

Three weeks ago, the Steelers were on track for the top overall seed in the AFC, but now they could end up a wild card. Pittsburgh has tough matchups remaining against Indianapolis (10-4) and division rival Cleveland (10-4).

Pittsburgh averaged 29.8 points during its first 10 games and Ben Roethlisberger, back from an elbow injury that cost him most of 2019, looked like an MVP candidate. But the Steelers struggled to an uninspired 19-14 win over a COVID-19-decimated Baltimore Ravens team on Dec. 2 and haven’t topped 20 points in a game since.

“High frustration,” said Roethlisberger, who had 19 passing yards in the first half and was picked off by Mackensie Alexander, setting up a touchdown. He finished 20 for 38 for 170 yards.

Cincinnati (3-10-1) snapped a streak of 11 straight losses to Pittsburgh in most unlikely fashion, with Ryan Finley at quarterback. The second-year player, starting in place of injured No. 1 overall draft pick Joe Burrow, completed seven passes for 89 yards, but his touchdown run early in the fourth quarter all but sealed it for the Bengals.

The injury-plagued Bengals had lost five straight, averaging 10 points per game and rarely looking competitive, since Burrow led them to a 31-20 victory over the Tennessee Titans on Nov. 1.

“We gave everybody a game ball today,” said coach Zac Taylor, now 5-24-1 in his two seasons. “Everyone deserves to cherish this night. We needed a big divisional win against a team we’ve struggled against. It was fun to see the players celebrate and have fun.”

Pittsburgh was a 14-point favorite, and the Los Angeles Rams were favored by 17 before losing to the previously winless New York Jets on Sunday. It was the first time since the 1970s that two teams favored by 14 points or more lost on the same weekend.

Veteran running back Giovani Bernard, who's been starting in place of the injured Joe Mixon, had 25 carries for 83 yards as the Bengals stuck to a ground-heavy approach. He ran for a touchdown and caught a pass from Finley for another score. Both TDs came after the Bengals forced turnovers.

TOO LITTLE, TOO LATE

The Steelers rallied within 17-10 in the second half before Finley ran untouched around the left side for a 23-yard touchdown with 11:21 left in the game to push the lead back to 14.

Pittsburgh scored again on a plunge by Benny Snell after getting a pass-interference call in the end zone on fourth-and-4 from the Cincinnati 12.

The Steelers got the ball back with 2:17 left at their own 24 but four incomplete passes by Roethlisberger all but finished it. Austin Seibert kicked a 33-yard field goal with 12 seconds left for the final margin.

There were more Terrible Towels than Bengals jerseys in Paul Brown Stadium, where the limited crowd was announced at 10,249.

Finley was the third starting QB for the Bengals this season. Burrow suffered his season-ending knee injury on Nov. 22 and Brandon Allen started the next three games, all losses. Allen suffered a knee injury in a loss to the Dallas Cowboys on Dec. 13.

With a first-quarter sack, Steelers LB T.J. Watt joined Hall of Famers Reggie White and Derrick Thomas as the only players to record at least 13 sacks in three of their first four seasons.

Steelers: FB Derek Watt went to the locker room with a possible concussion in the first quarter and was ruled out. TE Eric Ebron suffered a back injury in the second quarter and did not return.