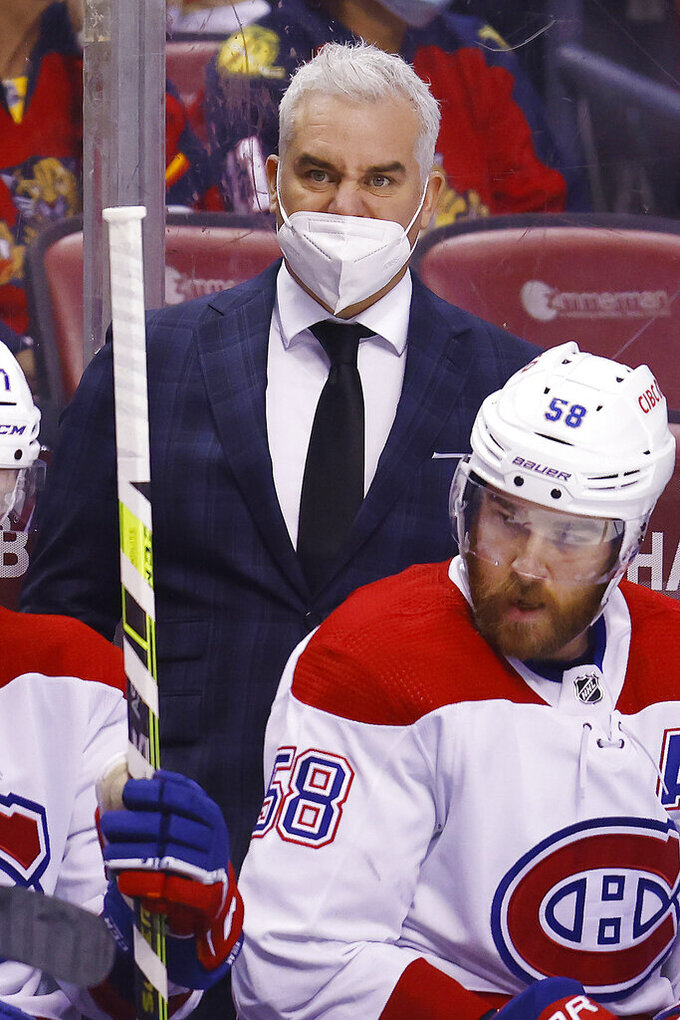 Montreal Canadiens head coach Dominique Ducharme looks on from the bench during the first period of an NHL hockey game against the Florida Panthers, Saturday, Jan. 1, 2022, in Sunrise, Fla. (AP Photo/Michael Reaves)

SUNRISE, Fla. (AP) — Sam Bennett scored twice and Sergei Bobrovsky made 29 saves to lead the Florida Panthers past the Montreal Canadiens 5-2 on Saturday for their third straight win.

Aleksander Barkov, Frank Vatrano and Mason Marchment also scored and Jonathan Huberdeau had three assists for the Panthers, who improved to 17-3 at home and 14-0 overall when leading after two periods.

Jonathan Drouin and Nick Suzuki scored for Montreal, which continued to be decimated by coronavirus issues, with 16 players in COVID-19 protocol. Sam Montembeault stopped 43 of 48 shots.

“The players showed courage," Canadiens coach Dominique Ducharme said. "We said before that we would fight, and we did fight.”

Vatrano skated toward the net and redirected a feed from Sam Reinhart for his eighth goal to give the Panthers a 3-2 edge at 17:30 of the second period.

Floridaopened a 4-2 advantage 15 seconds into the third period when Bennett deflected MacKenzie Weegar’s shot past Montembeault for his 11th goal.

“Give Montreal a lot of credit, they really worked," Panthers interim coach Andrew Brunette said. "They pushed us for a period-and-a-half there where it took us a little while to get our game back.”

Montreal went ahead 2-1 at 9:29 of the second, when Suzuki scored his seventh goal by putting in the rebound of Jesse Ylonen’s shot.

“Our energy was good. A lot of guys starting their NHL careers,” Suzuki said. "We knew our lineup and everyone seemed pretty upbeat. But it’s a lot of minutes out there for guys and everybody trying to make the most of their opportunities.”

Bennett scored 32 seconds into the game to give Florida a 1-0 lead. It was Bennett’s 10th goal.

“It’s never fun to sit out and watch the team, but it felt great to get back in the lineup and contribute early and help the team get a win,” said Bennett, who missed Thursday night's win over Tampa Bay due to a stomach bug.

Montreal forward Jake Evans and defenseman Alexander Romanov were placed in the NHL’s COVID-19 protocol before the game. The Canadiens dressed only 11 forwards and five defensemen due to having 16 players in the protocol. There’s plenty of time for them to recover before the Canadiens’ next game.

Montreal was scheduled to start a five-game homestand on Tuesday; the Canadiens had games against Washington, Toronto, Buffalo and Columbus postponed because of attendance restrictions put in place by government officials. They won’t play now until Jan. 12 at Boston in a game that was originally scheduled to be held in Montreal.

Between coronavirus-related shutdowns, the NHL’s holiday break and the upcoming postponements, Montreal is in the middle of a stretch where it will play only three games in a 26-day span.

Florida won 59 games in 2021, by far the most ever by the Panthers in a calendar year. Montreal — even with a run to the Stanley Cup Final in there — lost a staggering 67 games in 2021. This Canadiens team is on pace to finish with the second-worst record in the franchise’s storied history.

NOTES: It was the first New Year’s Day game for Montreal since it beat Boston 5-1 before 67,246 fans at Gillette Stadium, home of the New England Patriots, in 2016. Florida had not played on Jan. 1 since a 2-1 win at Buffalo in 2006. ... It was the first of four meetings between the teams this season. They don’t meet again until March 24 at Montreal. … Jonathan Huberdeau’s sister, Josiane, sang the national anthems. She received a hug from her brother after she finished.