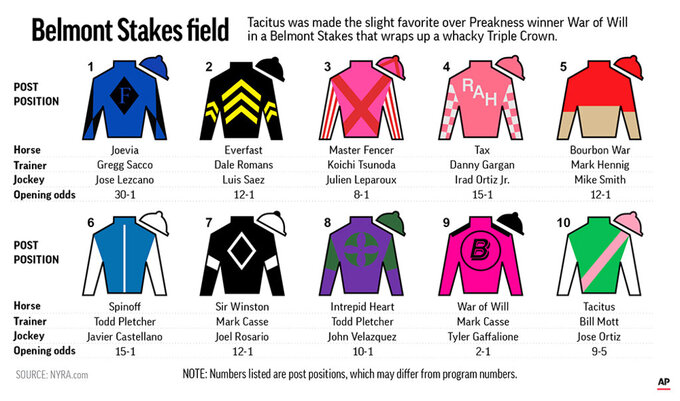 BALTIMORE (AP) — Without high-tech cameras and updated monitors, TV viewers would not have been able to see Justify win the 2018 Preakness.

At least not nearly as clearly as they did.

When the fog descended on Pimlico Race Course, everyone was blinded to the track. But NBC Sports' use of the "BatCam" and high-definition monitors in the broadcast booth for the first time allowed announcer Larry Collmus to call the race - providing viewers accurate play-by-play - despite not being able to see the horses.

Much of the same technology will be utilized again at the Belmont on Saturday. In fact, it could be used at all Triple Crown and Breeders' Cup races to ensure fans at home can see the race sometimes better than those at the racetrack.

"They put you in the best seat in the house," said Drew Esocoff, who has directed NBC's Triple Crown telecasts since 2011. "These cameras, whether they're high-def or 4K, also allow for better manipulation of video: zooming in, zooming out without major degradation of the video quality. It just makes the viewing experience better and you're also looking at it on high-def monitors. Compared to what you saw 25, 30 years ago, it's night and day."

Viewers benefit from some of the same technology that allowed NBC to broadcast the foggy Atlanta Falcons-New England Patriots NFL game in 2017 because unique camera angles can be used to show the action that may otherwise be obscured by weather. The monitors, which won't be seen by viewers, are essential for Collmus, especially at the Preakness and other races where infield festivities block his view of the backstretch.

Collmus, who has been the voice of all Triple Crown races on NBC since 2011, could have used the technology four years ago when he called American Pharoah running through the driving rain in the Preakness on the way to being the sport's first Triple Crown winner since 1978. The monitors that were put in because of an additional infield concert stage last year actually turned out to be a Godsend because the fog forced him to call the entire race off them.

"I call races through a pair of binoculars, my normal routine, and last I looked, they don't work in the fog," Collmus said. "I just looked out over the track and realized, hey, you're not going to be able to see anything. ... I was completely dependent on camera shots."

After preparing for the situation by setting up anticipated camera angles that could show the race, Pierre Moossa, who directed Justify's foggy Preakness victory because Esocoff was at a graduation, shifted from shot to shot.

The television production truck parked outside the grandstand was full of white screens. As soon as Moossa saw the flash of a horse and gave the American viewing public the chance to see far better than anyone at Pimlico.

The biggest difference from inside the production truck was the addition of the zip-line "BatCam" camera similar to the SkyCam used in football. Without that, the race would've been run almost blind with no video record to show for much of it.

"It was the first year we had ever had that at the Preakness Stakes," Moossa said. "That was able to be low enough to be able to cover the backstretch. If that camera wasn't there, you would not have seen any horses for the entire backstretch. There was no other way to cover it."

The good news for viewers is now races can be called in almost any conditions.