Big 3rd quarter not enough for Bears vs. Raiders 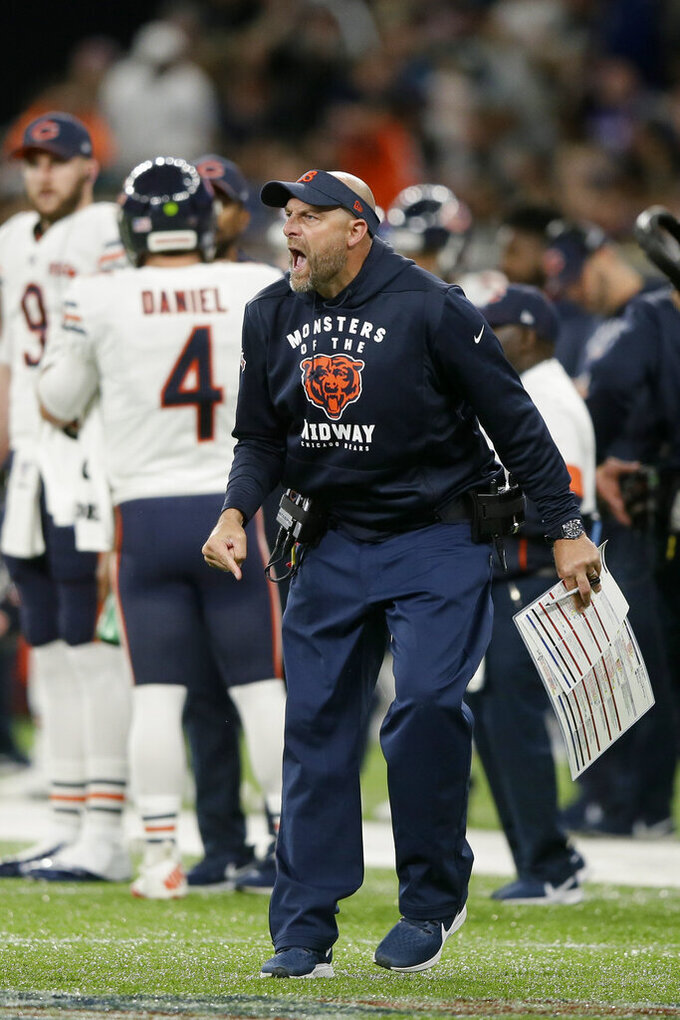 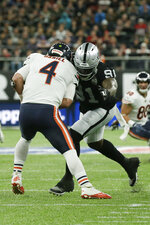 LONDON (AP) — The problem for the Chicago Bears was more about their play in the trenches than when they arrived in London.

A Bears team known for its dominant defensive front was overwhelmed by the Oakland Raiders rushing game and Chicago was unable to generate anything on the ground at all. That added up to a 24-21 loss Sunday night that sent the Bears home from their short stay across the pond searching for consistency.

The game couldn't have started much worse for the Bears (3-2), who were held to 44 yards behind backup quarterback Chase Daniel in the first half by a Raiders (3-2) defense that had struggled ever since trading Khalil Mack to Chicago. The vaunted Chicago defense didn't do much either and the Bears trailed 17-0 at the break.

That raised questions about whether arriving on Friday — four days after the Raiders got to town — was a bad move by coach Matt Nagy.

"Had nothing to do with when we came here and when we didn't," Nagy said. "It's about playing football."

The Bears played good football for a little more than a quarter. They pounced on Oakland in the third quarter, turning a botched pitch into a fumble recovery by Mack and a 14-yard TD drive capped by a 1-yard run by rookie David Montgomery that got them back into the game.

Chicago didn't stop there, driving 89 yards after forcing a punt to cut the deficit to 17-14 on Daniel's first of two TD passes to Allen Robinson.

Those two struck again from 16 yards the first play following Tarik Cohen's 71-yard punt return and Chicago turned that big halftime deficit into a 21-17 lead in a span of 13:34.

"When we went in at halftime there was no panic," Daniel said. "There was cool, calm, let's go make a play, and the whole thing was one-play-at-a-time mentality, and I thought we really did that for the most part."

That appeared to be enough to send the Bears home happy after Sherrick McManis punched the ball loose from Trevor Davis at the goal line, leading to a recovery by Prince Amukamara at the 1-yard line. A toe-tapping catch by Robinson and a disputed roughing the passer penalty on Maurice Hurst allowed the Bears to move into Oakland territory before stalling again thanks in part to the lack of a running game and poor play from Daniel.

But that wouldn't have mattered if a usually dominant defense hadn't wilted at the end. Oakland took over at its 3 with 7:49 to go and marched 97 yards for the go-ahead score. The drive was extended when Kevin Pierre-Louis was called for running into the kicker on fourth-and-6 from the Oakland 22.

The Raiders called a fake on the next play and Erik Harris gained 3 yards even though the Bears were ready for it.

The Bears then allowed two long passes to rookie tight end Foster Moreau as the defense failed to generate any pressure and Josh Jacobs leaped in from the 2 for the go-ahead score with 1:57 to play.

Daniel completed three passes to get Chicago into Oakland territory before an errant throw was intercepted by Gareon Conley, sealing the defeat for the Bears.

"I just think we didn't play well, bottom line," Daniel said. "All this stuff, at the end of the day your job is to go out and play football games and top to bottom today we didn't do it.