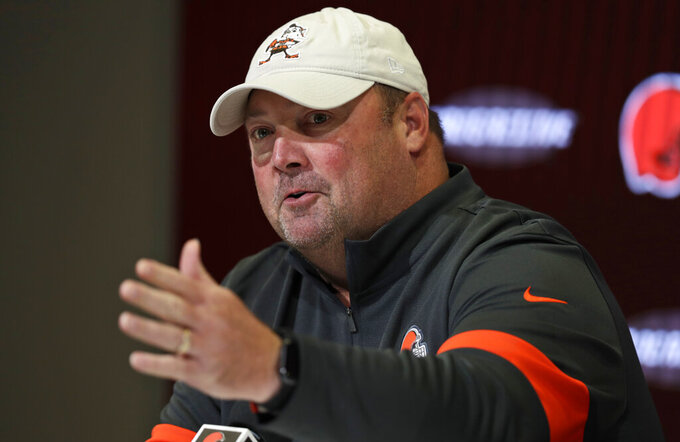 "I want everybody to understand this: Our goal here with the Cleveland Browns is always to win the Super Bowl," he said. "I don't want to ever be scared to talk about what our goal is.

The first-year head coach and general manager John Dorsey conducted a joint news conference Wednesday on the eve of training camp, which will be held at the franchise's suburban headquarters.

All tickets for the 15 open practices have been distributed, reflecting the excitement surrounding the Browns after rookie quarterback Baker Mayfield led them to a 7-8-1 season.

Adding wide receiver Odell Beckham Jr. and defensive end Olivier Vernon — both Pro Bowl players — has changed the perception of a team that finished 0-16 two years ago and went 635 days and 19 games without a victory until beating the Jets on Sept. 20, 2018.

Mayfield, Beckham and wide receiver Jarvis Landry attempted to expedite the process by working out together in California. Mayfield also spent considerable time cultivating his celebrity and got married, but Kitchens isn't concerned about his focus drifting away from football.

"Baker knows what he's doing, don't ever have a misconception about that," said Kitchens, who served as Cleveland's running backs coach and offensive coordinator last season.

"Baker hasn't changed from the first day he got here as a rookie. I want him to be who he is, but also, he's a 24-year-old guy and he's got a lot of life to live. He's not going to change for anyone. He's always going to speak the truth. That's what I like about him."

One area of concern is running back, where Duke Johnson publicly requested a trade after the team signed ex-Chiefs standout Kareem Hunt. Johnson did report to camp on time.

Second-year pro Nick Chubb is the starter, and Hunt was suspended for eight games following an act of domestic violence that prompted Kansas City to release him. He has been placed on the active/non-football injury list with a groin problem.

Dorsey said he has spoken with Johnson's agent, Drew Rosenhaus, and termed their discussions productive. He also addressed Hunt's recent argument outside a downtown Cleveland bar, noting the team and NFL consider it a non-issue.

"Freddie and I both had a chance to sit down with him," Dorsey said. "Kareem understands there are no guarantees in life. He is going about exactly what he has been going about. He is working his fanny off, on the field as well as off the field."

Kitchens expects to see similar energy from the rest of the roster now that camp has arrived.

"This is the only business in the world where you hire 90 guys, only to fire half of them," he said. "Right now, we're just a bunch of individual good players. Until we do something, that's all we are is a bunch of good players. This game is about winning. That's all this is about every day."

NOTES: Contract extension talks are under way with S Damarious Randall, who will be an unrestricted free agent in March. Dorsey said he has had "a lot of good conversations" with his agent, Dave Butz. Randall made four interceptions and 84 tackles for Cleveland last season after shifting from cornerback. . Dorsey wore a Browns sweatshirt and Kitchens sported a Brownie the Elf cap and team-logo pullover, which is their traditional news conference attire. "Do you think we read GQ magazine cover to cover?" Dorsey joked. Kitchens feigned shock and shot back, "Well, I might."