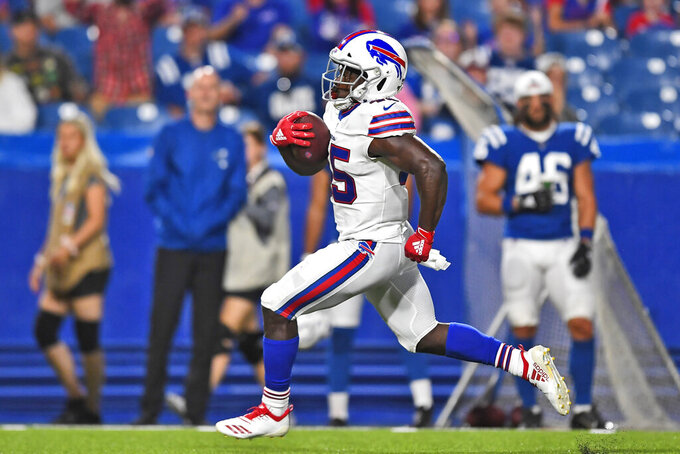 Buffalo Bills' Christian Wade runs the ball for a touchdown during the second half of an NFL preseason football game against the Indianapolis Colts, Thursday, Aug. 8, 2019, in Orchard Park, N.Y. Wade gave up a promising career representing England in rugby to give American football a try. On his first play from scrimmage in a competitive setting, the 28-year-old from Slough _ best known for home of the BBC's version of "The Office" sitcom _ scored a touchdown on a 65-yard run to help the Buffalo Bills secure a 24-16 preseason-opening win over Indianapolis. (AP Photo/Adrian Kraus)

ORCHARD PARK, N.Y. (AP) — Having spent much of his life playing rugby in England, Christian Wade is so new to American football the 28-year-old Buffalo Bills running back wasn't sure what to do when he reached the end zone. Or where he was supposed to go after he scored.

"I was kind of looking around and didn't know," Wade said, recalling the confusion that set in after he was mobbed by teammates in the end zone following a 65-yard run in the fourth quarter of Buffalo's 24-16 preseason-opening win over Indianapolis on Thursday night.

"Everyone was celebrating. And I was trying to celebrate but thinking about, 'What am I supposed to do next?'" he said. "And everybody's like, 'Come off the field!' I ran over and it was like, 'Aaaah!' But yeah, it was like the best feeling in the world."

Coach Sean McDermott could only break into a laugh at once again being reminded how Wade is not your typical NFL rookie.

"Yeah, I don't think we covered that maybe in the install: What happens if you score, right?" McDermott said, shaking his head in wonder. "He's used to going right back to the huddle and going to the next play."

It's one step at a time for Wade, whose crash course in football had him scoring on the first and only time he touched the ball in a competitive setting.

Taking the handoff and reading how the linemen were blocking to the left, Wade burst through a huge hole, avoided a tackle and surged up the right sideline untouched.

"I wasn't surprised," he said. "I think everyone else was surprised that happened on my first touch. It was an incredible moment for me."

Wade is no stranger to scoring. He left behind a professional rugby career playing for the Coventry-based Wasps of England's top league, where his 82 career tries rank third on the list.

"I took a massive leap of faith," he said, referring to having the Wasps grant a request to release him from his contract in October.

"I felt as though I was ready for a new challenge, ready to kind of put rugby aside and push myself to the limit," he said. "I really didn't have a fear of failing because I feel like I've got nothing to lose."

Wade is one of this year's four graduates from the NFL's International Player Pathway Program , in which the league is seeking to draw athletes from around the world to globalize the game. Established two years ago, the program has international players spend three months training alongside unsigned free agents and draft prospects under the supervision of former NFLers at the IMG Academy in Florida.

The international players deemed to have potential are then assigned to teams.

The IPPP players also have the benefit of being exempt from NFL roster limits, including a team's 10-man practice squad once the season begins.

Successful as his debut was, and accustomed as he is to running with the ball and avoiding tackles, Wade understands how much more he needs to learn, from something as complex as the playbook to simply knowing where he's supposed to line up in the formation.

"If you can't do that, you can't play," he said. "You can be the fastest in the world, you can have great footwork, but you won't get on to the field or be able to play this game if you can't do what's necessary on this side of the ball."

McDermott can only imagine how daunting the learning process is for Wade.

"It would be like any one of us going over to where he's from and trying to play the game he grew up playing," McDermott said. "I have a great appreciation for what he's trying to accomplish here."

Wade's teammates are rooting for him.

"Everybody was waiting for that first carry, and he couldn't have made us more proud," receiver Cole Beasley said. "That's one of the most amazing things I've ever been a part of in my eight years."

What separates Wade from most rookies is he's accustomed to knowing how to train, stay in shape and the level of determination required to succeed. He's also familiar to performing under pressure, having played in stadiums packed with 80,000 fans.

Wade's experience also allows him to appreciate the incremental achievements he's made in football. He acknowledged scoring the touchdown eased whatever late night self-doubts that occasionally crept into his mind over whether he made the right decision to leave rugby.

"A play like that, and on my first run, that gives me the extra energy, extra boost to saying, 'You're doing the right thing. Just keep pushing,'" said Wade, who was awarded a game ball. "The word is 'validate.' It tells me internally that I'm headed in the right direction."

Perhaps, that'll include knowing where he needs to go the next time he scores a touchdown.

Wade burst into a big laugh and said, "I think so, but I think it might take me getting used to it."