Bills among the NFL's 4 defenses peaking in the postseason 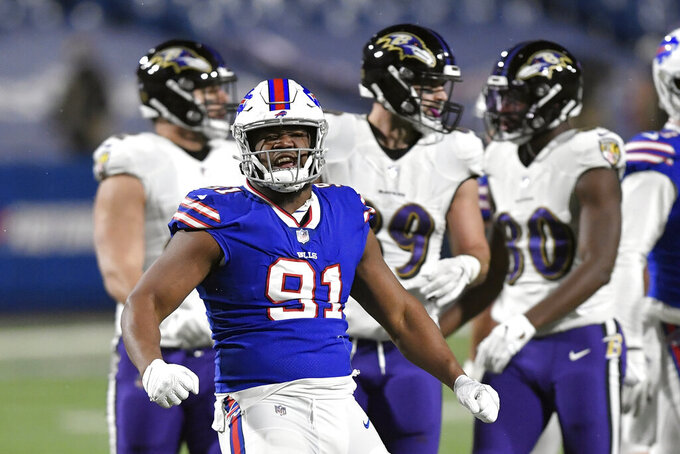 It was mid-November and the Bills were entering their bye week on the heels of a 32-30 defeat at Arizona. Immediately dubbed “The Hail Murray,” the Cardinals won on Kyler Murray’s desperation 43-yard touchdown pass to DeAndre Hopkins, who outleaped three defenders in the end zone with 2 seconds left.

Frazier, Buffalo's defensive coordinator, recalled collecting his thoughts on the flight home when frustration turned to hope in coming to the realization of how the experience could become a valuable motivating tool.

“I said to myself, ‘If we handle this the right way, this could turn out to be a positive instead of a negative.’ It didn’t have to be something that carried over to the next one and affect the rest of your season,” Frazier said this week. “To our players’ credit, I think they rebounded. ... That was a hard loss for a lot of reasons and they didn’t let it hold them back.”

The Bills (15-3) have won eight straight since and are preparing to make their first AFC championship game appearance in 27 years Sunday, when Buffalo travels to face the top-seeded Kansas City Chiefs (15-2).

Though much of the credit for Buffalo’s success has centered on a dynamic Josh Allen-led offense, the defense has shown signs of shedding its early season deficiencies to find itself gradually peaking over the final half of the year.

Buffalo has allowed just 137 points since the loss to Arizona after giving up 273 points in its first 10 games. And rather than blowing leads, the defense is now closing out victories as evidenced in two playoff wins.

Safety Micah Hyde, one of the defenders burned by Hopkins, sealed a 27-24 wild-card win over Indianapolis by batting down Philip Rivers’ desperation pass intended for T.Y. Hilton as time ran out. On Saturday, cornerback Taron Johnson punctuated the defense’s most complete performance by returning Lamar Jackson’s interception for an NFL playoff record-matching 101-yard touchdown in a 17-3 win over Baltimore.

The outings validated the patience Frazier showed in a unit that opened the season allowing an average of 387 yards over its first six games, following consecutive losses to Tennessee and Kansas City. And it brings confidence to a group eager to show it’s better than the unit that was trampled by the Chiefs in allowing a season-worst 245 yards rushing in a 26-17 loss on Oct. 15.

“I think more than anything, it emphasizes and highlights a very resilient group of players that have continued to develop all the way through the season,” coach Sean McDermott said. “And that’s important because it’s a journey. There’s going to be highs and lows through a season. And those players have done a phenomenal job of learning from previous situations and experiences.”

The Bills aren’t the only defense to have overcome obstacles among the four remaining playoff teams.

The Chiefs' defense is no pushover despite finishing the season 16th in yards allowed.

Kansas City limited Buffalo to a season-low 206 yards of offense in Week 6; limited the Saints to 285 yards in a 32-29 win at New Orleans on Dec. 20 in Drew Brees’ return after missing a month with rib injuries; and finished the season tied for ninth in the NFL in forcing 26 takeaways.

In the NFC, the Packers are allowing an average 306 yards offense over their past seven outings. And Green Bay is coming off a 32-18 divisional-round win over the Rams in which Los Angeles finished with a time of possession of 23 minutes and 48 seconds.

“They were relentless all game,” Packers coach Matt LaFleur said of his defense. “That’s the one thing that I think has really shown through the last half of the season, is just the intensity level.”

As for Tampa Bay, the Buccaneers head to Green Bay coming off a 30-20 win over New Orleans in which their defense forced four turnovers, three leading to touchdowns, and limited the Saints to 73 yards offense and four first downs on their final four possessions.

The Buccaneers were led by second-year linebacker Devin White, who had an interception, recovered a fumble, and tied a franchise record with 11 tackles in his playoff debut.

Since allowing a combined 956 yards in back-to-back losses to the Rams and Chiefs in late November, the Buccaneers have returned from their bye week to to allow a combined 1,943 yards and force 10 takeaways in their past six.

“It’s a different football team than that week,” coach Bruce Arians said, referring to a 38-3 loss to New Orleans on Nov. 8. “I tell everybody that. Nobody wants to believe me.”

The same can be said in Buffalo, where the Bills’ two playoff wins came against a 10th-ranked Colts offense and the league’s top running attack in Baltimore.

Here comes Patrick Mahomes, should he clear the NFL’s concussion protocol, and the league’s top-ranked offense.

Safety Jordan Poyer understands the challenge ahead, and knows critics are counting out Buffalo, just as they had last week.

“I don’t think anybody’s given us a chance really all year,” he said.

“We’re the ones that believe in ourselves, have the confidence,” Poyer added. “We’re just worried about us. And at the end of the day, we always talk about them, they’ve got to come play us.”

The turning point was losing at Arizona.

“You go into the bye with that taste in your mouth, it gives you a little bit of an edge,” Poyer said. “That’s not us. We’re better than that.”