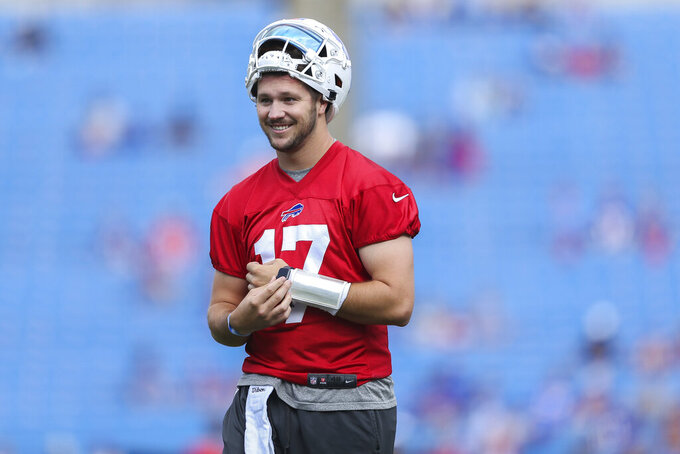 ORCHARD PARK, N.Y. (AP) — Bills quarterback Josh Allen can put behind all those who doubted his accuracy, his small-school pedigree, and the hundreds of rejection letters he received from college recruiters.

Allen is unwanted no more in having found a long-term home in Buffalo.

The fourth-year starter on Friday became the NFL’s second-highest paid player by signing a six-year contract that locks him up through the 2028 season. The contract has a potential worth of $258 million, of which an NFL-record $150 million of the deal is guaranteed.

The Bills announced the signing, and a person with direct knowledge told The Associated Press of the contract’s value. The person spoke on the condition of anonymity because Allen and the team did not disclose those figures.

The total value and annual average of the deal ranks second in the NFL behind only Kansas City Chiefs starter Patrick Mahomes, who signed a 10-year, $450 million contract last year.

“It’s surreal to be in this spot right now,” said Allen in securing a quarterback position in Buffalo that’s been unsettled since since Hall of Famer Jim Kelly retired 25 years ago.

“I’m just thankful that we could get it done and now we can focus on going out there and earning it, and making sure they understand that I know they didn’t pay me for what I’ve done,” he added, noting the deal was completed on his mother's birthday. “They did this because they expect me to continue what I’m doing, and expect me to go win this team some championships.”

The contract was signed a few days after general manager Brandon Beane said he wanted to get a deal done with the quarterback before the season or put talks off until next year so not to serve as a distraction.

Allen was under contract through the 2022 season after the Bills in May picked up the player’s fifth-year option, worth nearly $23 million.

Talks picked up late Thursday, and reached a point where the parameters of the deal were in place by 4 a.m., Beane said.

“We’re committed to Josh. So that shows there’s no trepidation on our part of, oh, let’s just extend it a year or two or anything like that. We believe in Josh,” Beane said.

“He’s been everything that we thought and then some. It’s an exciting moment for him and for our franchise,” he added. “It’s a relief ... to know this organization has what we believe is the right guy in place for the next eight years.”

Allen is coming off a breakthrough season in which he set numerous franchise passing and scoring records in leading Buffalo to its first AFC East title since 1995 and deepest playoff run in 27 years. Buffalo’s season ended with a loss to Kansas City in the AFC championship game.

Allen’s production last year continued a trend of him making significant jumps in progress since the Bills traded up five spots in the draft order to select the quarterback with the seventh pick in the 2018 draft. Allen was the third of five quarterbacks drafted in the first round in 2018, and was knocked for accuracy issues during his three seasons at Wyoming, and after he began his career at Reedley Junior College in California.

The questions followed Allen through his first two seasons in which he ranked 32nd among NFL starters by completing less than 59% of his passes. Allen’s completion percentage jumped to 69.2 last year to rank fourth-best among NFL starters.

After going 5-6 during his rookie season, he’s gone 23-9 over his past two seasons, and is 2-2 in four playoff appearances.

Allen has matured from a raw, strong-armed quarterback who had technique issues, and someone who relied too much on scrambling out of the pocket. Though he still remains a threat to run, Allen has been groomed to be more patient in the pocket.

Allen has benefited from a front office that has assembled an experience group of receivers, over the past three years. It began with Buffalo signing Cole Beasley and John Brown in free agency in 2019, and continued the following offseason when the Bills acquired Stefon Diggs in a trade with Minnesota .

Allen has also enjoyed stability at the coaching level in having spent his tenure in Buffalo working exclusively under head coach Sean McDermott and offensive coordinator Brian Daboll.

McDermott compared Allen’s ability to overcome preconceptions to that of the rust-best city of Buffalo the team calls home.

“People say things about Buffalo, but they really don’t know. They don’t take the time to come find out,” he said. “I think Josh is changing that and I think we’re changing that.”

McDermott joked his only fear was Allen getting hurt in practice before the deal was completed.