Bills’ Beasley not dwelling on past ahead of Dallas return 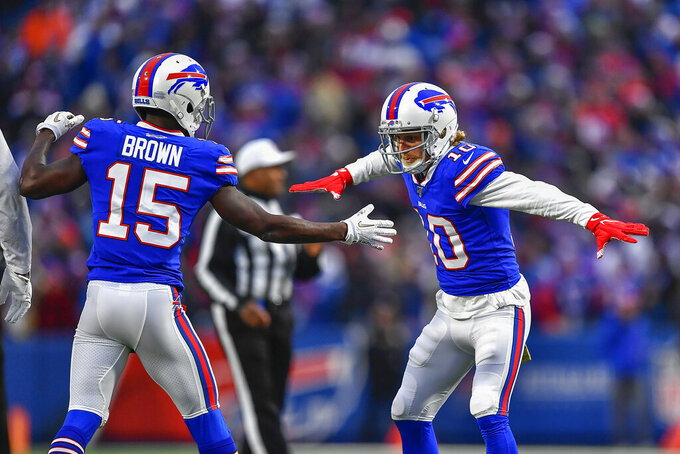 ORCHARD PARK, N.Y. (AP) — Ahead of his long-awaited return to Dallas, Cole Beasley is having too much fun with his new team to dwell on the past.

Beasley’s Buffalo Bills (8-3) will head to Dallas to take on the Cowboys (6-5) on Thanksgiving. It will be Beasley’s first game against his former team after spending the first seven years of his career in Dallas.

“I haven’t really thought about it,” Beasley said. “I’ve been happy here so I’m kind of focused more on what we’ve been doing here. There’s no ill will or anything. I still think I made the right decision, it was the best move for me and I don’t regret it one bit.”

That’s a different tone than the one Beasley struck earlier this offseason. The 30-year-old slot receiver was eager to move on from Dallas after speaking out about his lack of opportunities in the Cowboys offense. Beasley signed a four-year, $29 million deal with Buffalo in free agency and has been a featured performer for the upstart Bills with 49 receptions for 525 yards and four touchdowns through 11 games, Beasley is on pace to have one of the best seasons of his career.

“It’s all gone, I’m on a different team,” Beasley said. “The role is different now. I’m in a role that I wanted to be in anywhere at that point in time when I was trying to decide where to go. It’s been awesome. I’m getting to do exactly what I want to do here.”

Beasley has quickly become a go-to guy for Buffalo both in the locker room and on the field. The 5-foot-8, 174-pound wideout has repeatedly impressed with his consistency and toughness, in addition to his leadership skills.

“The thing about Cole that I don’t think really people give him credit for is his football IQ is extremely high,” Bills quarterback Josh Allen said. “The things that he sees on the field, he's kind of like a quarterback out there. He sees things open before they are.

“Concepts that he likes that he’s given to Coach Daboll we’ve incorporated into our offense and they’re key, core plays for us. We appreciate him here and we appreciate how hard he works each day.”

Beasley admits that a win over his former team would be special, but he’s more concerned about what it could mean for Buffalo’s postseason hopes. The Bills are coming off their two most complete performances of the season — wins over Miami and Denver — but are still looking for a signature win.

A victory over Dallas on Thanksgiving would do just that while pushing the Bills closer in the wild-card race in the AFC.

“There’s a part of you that wants to win it a little more, maybe, I guess, but I want to win them all,” Beasley said. “So it’s really not that much different. It will be fun to go against a lot of guys that I’ve gone and practiced against over the last few years, so it will be cool to do that. I won’t be talking any, like, serious (stuff) to ‘em but it will be some joking around, trash talking.”

While Beasley prefers not to reflect on the past, it’s clear that he’s been rejuvenated by his role in Buffalo. And it’s a role that he could see lasting for a long, long time.

“I feel like maybe at that point in time in Dallas I would’ve thought, maybe, I don’t know how many years I’ve got left, maybe I’ve got like one or two,” Beasley said. “But now I’m here and I’m happy and I’m having a great time. Really, I’ll play here ‘til the wheels fall off. I love the guys, I love the coaches. (Brian) Daboll’s one of the coolest coordinators I’ve ever had. So it’s been awesome.”

That feeling is mutual.