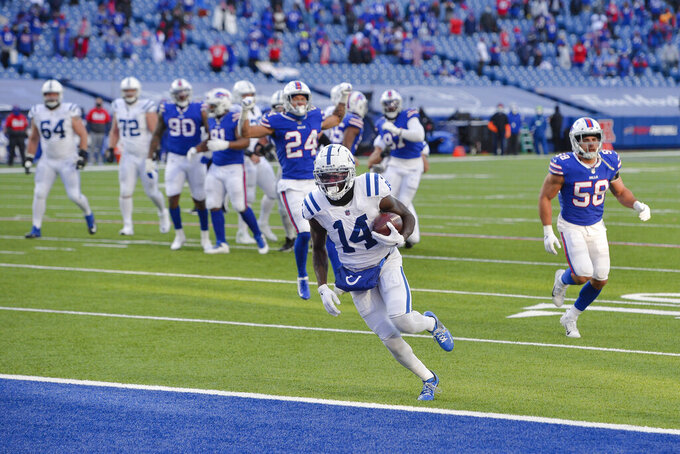 In a season in which the Bills busted numerous slumps, Allen became Buffalo's first starter in a quarter century to win a playoff game. And Hyde ensured the Bills wouldn’t endure another second-half collapse as happened last year in a wild-card loss to Houston, or last-second touchdown.

With Buffalo the AFC East champions for the first time since 1995 and hosting their first playoff game since ’96, Allen threw two touchdown passes and scored another rushing in leading the Bills to a 27-24 win over the Indianapolis Colts in a wild-card game Saturday.

Hyde batted down Philip Rivers’ desperation pass as time ran out in helping Buffalo snap an 0-6 postseason skid by winning its first playoff game since a 37-22 win over Miami on Dec. 30, 1995.

The past was very much present in Allen’s mind when reflecting on how Buffalo squandered a 16-0 third-quarter lead in a 22-19 overtime loss to Houston in his first career playoff appearance.

“Obviously we started off a little slow and we were able to get into a rhythm late. Made enough plays to win,” Allen said. “It’s new territory for myself, but it just gives us a chance to play next week.”

The end of the game was so stunning, in which the Bills nearly squandered a 24-10 fourth-quarter lead, safety Jordan Poyer was still having difficulty trying to put the result in perspective.

“I haven’t had time to celebrate and take it in, but this is awesome for the Bills organization, the city, to be able to play a home game and get a victory,” said Poyer, in his fourth season in Buffalo. “Since 2017, we’ve been working at this, but a day like today, to come out on top, we worked so hard.”

Hyde’s pass defense eased memories of the Bills giving up DeAndre Hopkins’ leaping 43-yard touchdown catch in the final seconds of a 32-30 loss at Arizona on Nov. 15. Buffalo has won seven straight since for its longest winning streak since 1990.

And the win came with a limited number of 6,700 fans in attendance for the first time this season.

Allen finished 26 of 35 for 324 yards with a 5-yard touchdown to Dawson Knox and a 35-yarder to Stefon Diggs, which led to the fans chanting “MVP! MVP!” to celebrate the first Buffalo player to lead the NFL in catches and yards receiving.

The Colts (11-6) ended a season in which they won 11 games for the first time since 2014, and reached the playoffs for the second time in three years under Frank Reich.

Rivers finished 27 of 46 for 309 yards and had his career playoff record drop to 5-7 in completing his first — and potentially last — season with the Colts as he ponders retirement.

Losing doesn’t get any easier for the 39-year-old, who has reached the conference championship just once in 2008.

“Shoot, it’s hard to go back 12 years ago to think how I felt in the locker room after that championship game,” Rivers said, referring to the Chargers’ 21-12 loss to New England. “It’s always emotional. But is it more emotional when you’re about to be 40 and you’re not sure if you’ve been in your last huddle? Heck yeah.”

The game wasn’t decided until the final play, when Rivers faced fourth-and-11 from Buffalo’s 47. Rivers heaved a deep pass for T.Y. Hilton, who was surrounded by defenders in the right side of the end zone. Hyde broke through the crowd of bodies, leaping up and batting the ball to the ground.

Rookie kicker Tyler Bass accounted for the decisive points by hitting a 54-yard field goal to put Buffalo up 27-16 with 8:08 remaining.

The Colts responded with a seven-play, 75-play drive capped by a 9-yard touchdown pass to Pascal. After Bass upped Buffalo’s lead to 27-16, the Colts scored less than two-minutes later. Rivers hit a wide-open Jack Doyle for a 27-yard touchdown and Doyle caught a 2-point conversion.

The Bills, however, didn’t make it easy. with Allen nearly losing a fumble at midfield when sacked for a 23-yard loss by Denico Autry on first down from the Indianapolis 37. Offensive lineman Daryl Williams, however, recovered, forcing the Bills to punt with 2:30 remaining.

“It doesn’t matter how it looks,” Allen said. “It’s the playoffs. It’s win or go home and we got it done.”

The Colts were limited to a touchdown and field goal in the first half after having all five drives cross midfield and enjoying a nine-plus minute edge in time of possession.

The turning point came when the Colts, up 10-7, were unable to score on four snaps inside Buffalo’s 4. Rivers’ pass for Michael Pittman glanced off the diving receiver’s fingertips on fourth down.

Buffalo responded with a 10-play, 96-yard drive capped by Allen’s 5-yard keeper with 14 seconds left in the half.

“All around, it felt like we just kept shooting ourselves in the foot,” defensive end DeForest Buckner said. “We just let it slip between our fingers.”

With his 5-yard TD run and TD completion to Knox, Allen became the fifth player since at least 1940 to score a touchdown rushing, passing and receiving in his playoff career. Allen scored on a 16-yard catch from John Brown in a 22-19 OT loss at Houston a year ago.

Colts: Their season is over after losing in the wild-card round for the first time since 2012.

Bills: They advance to the divisional round for the first time since the 1995 playoffs.