Bills believe they're better prepared for playoffs than 2017 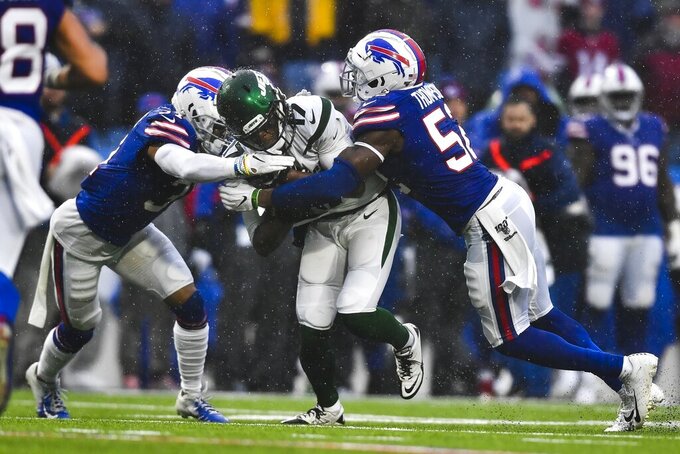 "That 9-7 team that made the playoffs?" Alexander said, recalling how the Bills had all the tiebreakers go their way — including Baltimore losing to Cincinnati on Tyler Boyd's last-minute touchdown catch — before sneaking in as the AFC's final seed. "We probably, talent-wise, shouldn't have been there, but we found a way to get it in."

This year, the 13-year veteran said, is far different.

How legitimate remains the question as the young and still developing fifth-seeded Bills (10-6) travel to face AFC South champion Houston Texans (10-6) on Saturday.

Though the Bills clinched their playoff spot two weeks ago, and have their most wins since an 11-5 finish in 1999, it's difficult to determine how much Buffalo benefited from a soft schedule.

Buffalo went 9-2 against opponents who failed to make the playoffs, including a 13-6 season-ending loss to the New York Jets on Sunday, when the Bills rested a majority of their starters. Otherwise, they were 1-4 against playoff teams, including a pair of losses to New England, with Buffalo's lone win coming against Tennessee in Week 5.

That didn't deter Alexander from suggesting the Bills aren't afraid of any opponent.

"We're not scared to compete or see anybody in the playoffs," he said.

The confidence stems from how the Bills performed down the stretch in both wins and losses. Buffalo raised eyebrows by beating the Cowboys at Dallas on Thanksgiving Day and then clinching a playoff berth with a Sunday night win at Pittsburgh.

And the Bills are buoyed by how each of their losses to Baltimore and New England over the past month weren't decided until the final 70 seconds. Both times, the Josh Allen-led offense failed to produce a game-tying touchdown inside the red zone and instead turned the ball over on downs.

The second-year quarterback has made strides in various areas, including winning five games this season with Buffalo trailing or tied in the fourth quarter.

And yet, Allen has overseen an offense that has been held to under 20 points eight times and limited to scoring two or fewer touchdowns 11 times — not including the mean-nothing season finale. Overall, the offense finished 24th in yards gained and 23rd in points scored in the NFL.

The inconsistent production places an emphasis on Buffalo's defense to continue effectively containing opponents. A unit that returned 10 starters from a year ago, finished this season ranked third in the NFL in yards allowed and second in points.

Two years ago, Tyrod Taylor was Buffalo's quarterback, and the offense came up short in a 10-3 wild-card loss at Jacksonville.

The Bills made the decision the following offseason to start over at quarterback by dealing Taylor to Cleveland and accumulate draft picks to trade up to eventually draft Allen with the No. 7 pick.

Allen's performance Saturday will provide an indication of how far the Bills have come in two years — or, perhaps, how far they still need to go.

A defense that's allowed just one 300-yard passing game (Ryan Fitzpatrick had 323 yards in Miami's 37-20 loss) this season, while generating 44 sacks — the most by Buffalo since 2014. In a 20-13 loss at Houston in October 2018, Buffalo limited the Texans to a season-low 216 yards offense and sacked Deshaun Watson seven times.

Finishing drives. Buffalo has scored 25 touchdowns on 44 drives inside an opponent's 20, with the 56.8% touchdown rate ranking 17th in the NFL, and ninth among playoff teams.

Receiver Isaiah McKenzie showed another dimension to his versatility by playing three snaps on defense against the Jets. McKenzie filled in at defensive back after Levi Wallace and Siran Neal were sidelined by injuries. Aside from his role as receiver, he has been used in running situations and plays special teams.

Little used fifth receiver Robert Foster had no catches on four targets in playing a season-high 63 offensive snaps. Sixth receiver Duke Johnson, by comparison, had six catches for 108 yards in his fourth game, and first after being inactive the eight previous weeks.

It's on to Houston, where Buffalo has lost three straight and is 2-3 overall against Texans.