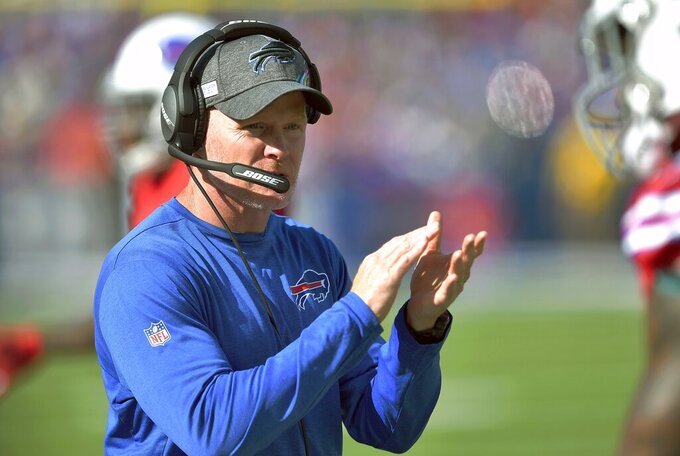 "If there's not a responsible move for us to make, we're not going to make it," McDermott said Wednesday, a day after the deadline passed. "There's been way too many years of irresponsible decision-making, let's just put it that way."

Though McDermott didn't mention names, it's clear he was referring to former general manager Doug Whaley, who was fired a day after completing the 2017 draft.

Whaley was best remembered for trading Buffalo's 2015 first-round pick to move up five spots in the 2014 draft to select receiver Sammy Watkins fourth overall. Watkins had three inconsistent and injury-shortened seasons in Buffalo before being traded in August 2017.

McDermott's comments were out of character for a coach who isn't known for publicly voicing criticism.

They also revealed how McDermott felt a need address a fanbase clamoring for the Bills to upgrade a team already off to a 5-2 start and preparing to host Washington (1-7) on Sunday.

McDermott didn't deny the Bills were open to making trades. The challenge was striking the right deal that fit the team's short- and long-term needs.

"I know a lot of teams go out there and just do things. And we're trying to do this the right way," he said. "At the end of the day, we didn't find something that would be responsible for us to do."

McDermott and GM Brandon Beane have spent much of the past two years undoing Whaley's mistakes by purging a roster with just four players remaining from the team that closed the 2016 season.

The two have stuck to a philosophy of rebuilding through the draft, while not overpaying in free agency. The Bills are projected to still have about $24 million in salary cap space available despite 17 offseason free-agent additions on the roster.

The Bills aren't near complete and continue to have several holes to fill, many of which were exposed in a 31-13 loss to Philadelphia last weekend.

Buffalo's run defense is coming off a game in which it allowed a season-worst 218 yards and three touchdowns rushing. It continues a three-game slide that coincides with second-year tackle Harrison Phillips sustaining a season-ending knee injury.

Veteran linebacker Lorenzo Alexander referred to the run-stopping issues as being correctible.

"We never want to be dominated the way we were last week," Alexander said. "We'll bounce back. I don't have any worry in my body about the guys in this locker room."

The Bills have especially had difficulty finding consistency at their No. 3 receiver spot behind offseason free agent additions John Brown and Cole Beasley.

Beasley said the offense is still finding its identity and noted it might have been counterproductive to add yet another player.

"Adding another new guy would slow things down a little bit," he said. "We still have tons of room to grow, and I think (McDermott and Beane) understand that as well."

Whaley's tenure briefly overlapped with McDermott being hired in January 2017, with Beane hired in May.

If Whaley considered himself a risk-taker, something he acknowledged after trading up to select Watkins, McDermott and Beane haven't taken many shortcuts.

"You've got to keep a strong eye on where you're trying to go and how you're trying to get there, and again responsible decision-making," McDermott said. "We're going to do what we feel is right for us. And in this case, we felt like standing pat is the right move."