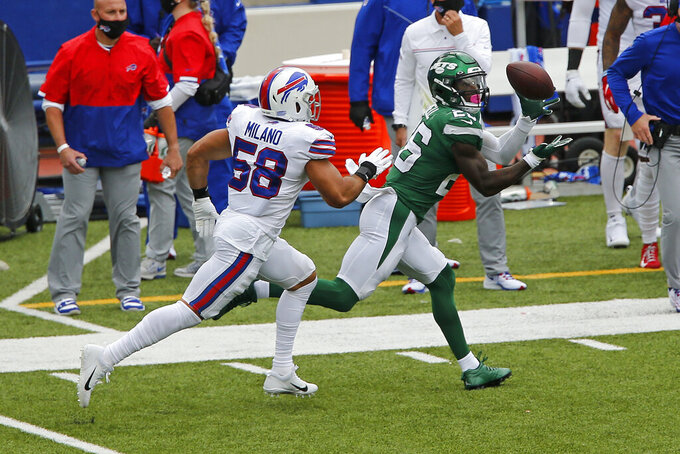 ORCHARD PARK, N.Y. (AP) — The status of Bills starting linebackers Tremaine Edmunds and Matt Milano is uncertain for Buffalo’s game at the Miami Dolphins this weekend.

Without going into much detail Monday, coach Sean McDermott would only say their injuries “don’t appear to be long term.” McDermott said he would know more as the week progressed.

Defensive coordinator Leslie Frazier expressed hope at least one of the two can play, without specifically saying which player.

“If we don’t get both of them back, we’ll at least have one of them back,” Frazier said. “They are vitally important to the success of our defense.”

Both were hurt in a 27-17 season-opening win over the New York Jets on Sunday.

Edmunds injured his right shoulder when he missed tackling Jets receiver Jamison Crowder, who scored on a 69-yard catch-and-run off a screen pass up the right sideline. Rather than attempting to wrap up Crowder with his arms, the middle linebacker tried to bowl him over by leading with his shoulder.

The third-year starter fell to the ground and was slow getting up before being evaluated on the sideline and eventually escorted to the locker room for tests. Edmunds returned to the sideline in the fourth quarter but did not play.

Milano, who made a leaping interception at midfield of Sam Darnold’s pass, did not return after hurting his hamstring in the first half. It’s unclear when the injury occurred.

Edmunds and Milano were fixtures on a defense which allowed the NFL's third fewest yards allowed last season. They both fit McDermott’s philosophy in being versatile in defending the run and dropping back in coverage.

The Bills are suddenly potentially thin at linebacker after backups Del’Shawn Phillips (quadriceps) and Tyrel Dodson couldn’t complete the game due to injury. That left Buffalo with just two healthy linebackers: A.J. Klein and Tyler Matakevich.

“It definitely gets a little hairy when you lose three guys the way we did yesterday,” Frazier said, referring to Edmunds, Milano and Phillips, who were injured before the start of the fourth quarter. “We were going through contingencies if another guy were to go down.”

The Bills have one linebacker on their practice squad, Andre Smith, who was acquired in a trade with Carolina two weeks ago.

The passing game, with Josh Allen finishing 33 of 46 for 312 yards, and spreading the ball to eight targets, including rookie fourth-round pick Gabriel Davis, who had two catches for 16 yards. The 33 completions were a career best for Allen, and the 71.4 completion percentage was his third highest.

Ball security. Though coordinator Brian Daboll could be second-guessed for having Allen carry the ball a career-most 14 times, including 12 in the first half, the quarterback has to do a far better job of protecting the ball. Both fumbles, to start and end the first half, came inside Jets territory.

Allen’s second fumble came with Buffalo up 21-0 and on a second-and-10 play from New York’s 13. Allen was tripped up and was falling headfirst to the ground when he attempted to use the ball to brace himself.

DE Trent Murphy had a sack and a tackle for a loss in having an impact against both the run and pass. Offseason questions were raised as to whether Murphy could be cut this offseason to save salary-cap space. He is in the final year of a three-year contract, with a $6.1 million base salary.

Rookie PK Tyler Bass. The Bills placed their faith in the sixth-round draft pick out of Georgia Southern at the expense of veteran Stephen Hauschka. Regarded for his strong leg, Bass missed his first two field-goal attempts wide right (from 38 and 34 yards), before hitting his final two (22 and 19 yards). Both misses were into the east end zone, which is usually with the wind at a kicker’s back.

To his credit, four of Bass’ six kickoffs were touchbacks in contributing to the Jets’ average drive start at their own 21.

The Bills face their second straight division rival in traveling to play the Miami Dolphins, who are coming off a sloppy 21-11 loss at New England.

Dolphins starter Ryan Fitzpatrick threw three interceptions, and New England quarterback Cam Newton ran roughshod over the defense with 75 yards rushing and two scores. If Buffalo’s defense is under-manned, it’s on Allen and Co. to take up the slack.