Bills dig themselves out of snow to make trip to Detroit 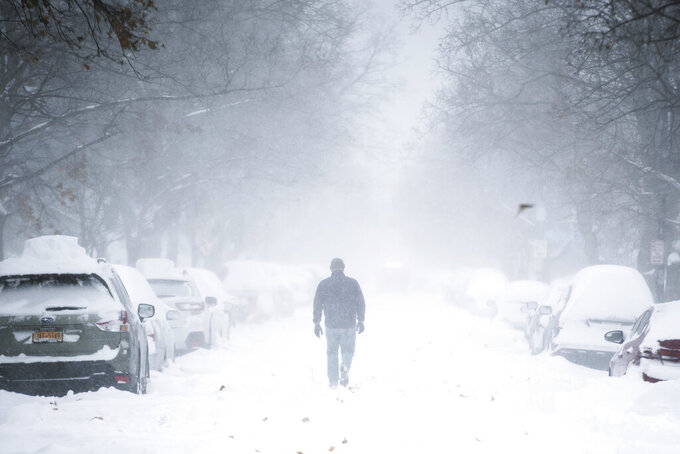 With the sidewalks partially blocked, a man walks in the middle of the street in the Elmwood neighborhood of Buffalo, N.Y., Saturday, Nov. 19, 2022. Residents of northern New York state are digging out from a dangerous lake-effect snowstorm that had dropped nearly 6 feet of snow in some areas and caused three deaths. The Buffalo metro area was hit hard, with some areas south of the city receiving more than 5 feet by early Saturday. (Libby March /The Buffalo News via AP)

When their vehicle couldn’t get any further because of mounds of snow blocking the road in one of Buffalo’s southern suburbs, Raccuia did the next best thing.

“Ron said, 'I’m going to walk to Dion’s house and walk him back to the car.′ And that’s exactly what he did,” said Boyko, the vice president of communications for the Bills.

No big deal, Raccuia added during a phone interview with The Associated Press as he and Boyko headed to Buffalo International Airport to catch the Bills' flight to Detroit for their relocated “home” game against the Cleveland Browns on Sunday.

“It was probably a quarter of a mile,” said Raccuia, the team’s executive vice president and chief operating officer. “Boyko would have done the same thing.”

The operation of getting everyone to the team facility began at 9:30 a.m. and ended with every member of the staff and players boarding buses, which received a police escort to the airport for a 45-minute flight that departed at about 4:45 p.m. EST.

The Bills-Browns game was moved to Ford Field in downtown Detroit because of the massive lake-effect storm that had dumped as much as 7 feet of snow over western New York since Thursday night.

One of the hardest hit areas was Orchard Park, where the Bills are based and many of their players live.

“We had a lot of resources willing to help, including a couple of snowmobile clubs,” Raccuia said, though snowmobiles weren’t needed in the end.

“We had snowplow drivers, we had staff members, everyone in football ops, security, game-day ticketing, Derek, myself, everybody chipped in,” he added. “We had car pools. We dug players out of their driveways. We picked up players. Anything you can think of to get it done.”

Numerous players posted videos and pictures on social media to thank the many residents who assisted them; Buffalo is known as “The City of Good Neighbors.”

“Wow, let’s go. Never seen anything like it,” Dawson Knox said in a video showing neighbors digging a path for him and fellow tight end Tommy Sweeney to get from their house to the road.

Tight end Quinten Morris woke up to find his driveway already cleared, and posted a picture with a note that read: “Lord gone bless you whoever did this.”

The storm hit nearly on the exact same day as in 2014, when another major snowfall forced the Bills to relocate to Detroit. Buffalo went on to beat the New York Jets 38-3.

This time, the logistics of moving the game were more complicated. The NFL was unable to push the game back a day as it did eight years ago because the Bills already face a short week — they play the Lions in Detroit on Thanksgiving.

Lions coach Dan Campbell said stadium crews had to dismantle some equipment already in place for a pregame show on Thursday in order for the Browns and Bills to play.

Despite the short notice, tickets for the game on Sunday sold out within the first few hours they were made available on Friday, Raccuia said.

“The Lions deserve a tremendous amount of credit for getting the stadium ready for us. Our fans have been unbelievable,” Raccuia said. “It’s very impressive the dedication, the skill and commitment that everybody has shown.”

NOTES: The Bills elevated CB Xavier Rhodes and WR Tanner Gentry from their practice squad for the game Sunday. ... The Browns made plans to make the 170-mile trip to Detroit by bus.