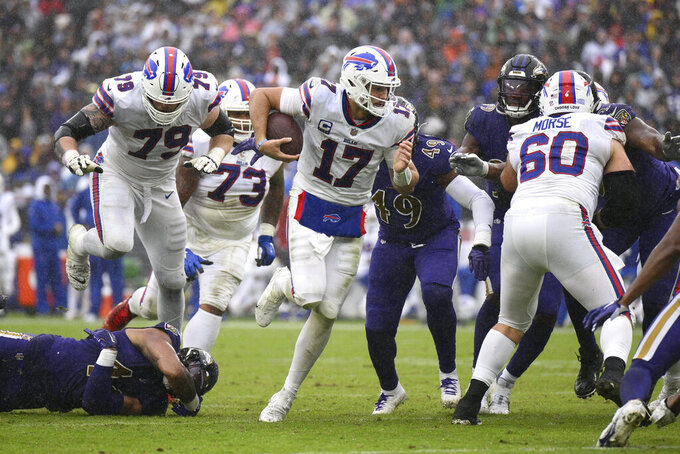 Buffalo Bills quarterback Josh Allen (17) runs for a touchdown against the Baltimore Ravens in the second half of an NFL football game Sunday, Oct. 2, 2022, in Baltimore. (AP Photo/Nick Wass)

ORCHARD PARK, N.Y. (AP) — So much for the Buffalo Bills’ recent struggles in close games.

Facing a 17-point deficit against the Baltimore Ravens, the Bills showed why they deserve to be considered one of the AFC favorites with how they rallied for a 23-30 victory on Sunday.

The Bills had lost their previous seven one-score games, and it took a well-rounded effort in the second half to get the job done.

Josh Allen made big plays with both his arm and his legs, helping Buffalo’s offense overcome an uncharacteristic start, and the Bills defense blanked Lamar Jackson and the Ravens offense in the second half.

“It’s a bit of a narrative, for sure,” wide receiver Stefon Diggs said about the Bills and close games. “We didn’t shun, we weren’t shy, we weren’t nervous. We went in, chin up, chest out and we went in with confidence that we were going to win the game.”

With Allen under center, the Bills seemingly have a chance to come back and win no matter the score.

As a team, the Bills are outscoring their opponents 63-7 in the second half through four games.

“There’s a reason he gets paid what he gets paid and he should probably get paid more, honestly,” tight end Dawson Knox said. “It’s clearly not surprising because he’s so consistent. And that’s just another reason why he’s the greatest player in the league.”

Buffalo’s injury-depleted defense got an enormous boost from the return of veteran safety Jordan Poyer. Poyer had two interceptions, which included perhaps the biggest play of the game — an interception in the end zone on fourth-and-2 with four minutes remaining.

“He’s an amazing player,” cornerback Taron Johnson said. “I’m honored to play with him. Just him being able to do that in the fourth quarter is huge. They were extremely big plays and really what won us the game.”

It was the third time this season the Bills blanked an opponent in the fourth quarter.

Cornerback Dane Jackson also returned after missing one week with a neck injury, but the Bills remain at less than full strength in their secondary. Tre’Davious White has yet to return to practice as he makes his way back from a torn ACL, Micah Hyde is out for the remainder of the season with a neck injury and cornerback Christian Benford is out indefinitely with a broken hand.

Against the Ravens, Buffalo’s latest string of injuries came on the offensive side of the ball. Receiver Jamison Crowder will be put on injured reserve with a broken ankle, coach Sean McDermott said Monday, and receiver Isaiah McKenzie suffered a concussion. Receiver Jake Kumerow has been out with a high ankle sprain.

Devin Singletary (129 yards on 34 carries for the season) has had his moments, but the running game as a whole has yet to take off for Buffalo.

James Cook. The second-round running back had just two snaps against Baltimore, one of which was a dropped pass.

Prepare to face a Steelers team with questions at quarterback after former Bills backup Mitch Trubisky was benched at halftime and replaced by rookie Kenny Pickett in a 24-20 loss to the New York Jets.