Bills have had their share of hair-raising 2nd-half moments 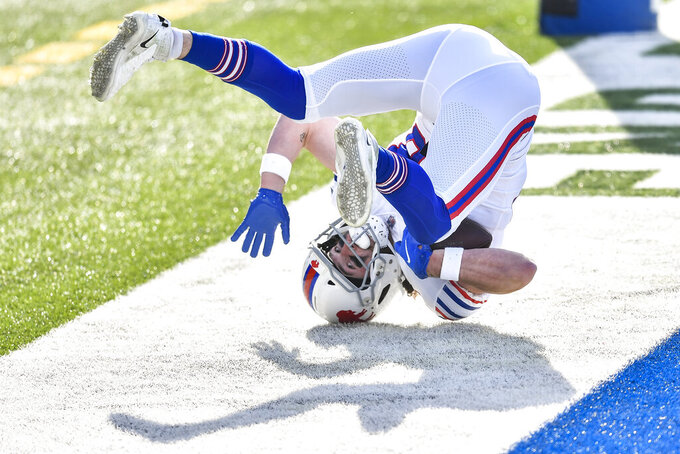 ORCHARD PARK, N.Y. (AP) — Difficult as it was watching the Buffalo Bills’ maddening inability to close out a win over the Chargers until the final minutes, coach Sean McDermott was at least able to laugh about it afterward.

“If I’m laying on the ground one of these days, you’ll know why. You’ll know why,” McDermott said, following a 27-17 win on Sunday.

“Look at this,” he said with a grin while pulling off his Bills ballcap to begin rubbing his bald head. “I had a full head of hair when I met you, right?”

As evidenced against Los Angeles, the Bills have had their share of hair-raising moments, particularly in the second half of games this season, in which they've not made it easy on themselves despite an AFC East-leading 8-3 record.

After building a 24-6 lead early in the third quarter, Buffalo nearly bumbled away its edge by turning the ball over on each of its first three possessions of the fourth quarter, and allowing the Chargers to close to within a touchdown.

Even after Tyler Bass hit a 43-yard field goal to give the Bills a 10-point edge, Buffalo’s defense allowed Justin Herbert to complete a 55-yard pass — on fourth-and-27, no less — to Tyron Johnson in the final minute to make things interesting.

That the Chargers mismanaged the clock and weren’t able to score on three plays from inside the 2 before the clock expired was immaterial. It instead became another example of the Bills’ flirtations with nearly turning wins into losses.

Then there was a 35-32 win over the Rams in Week 3, in which Buffalo squandered a 28-3 lead before pulling back ahead on Josh Allen’s 3-yard touchdown pass to Tyler Kroft with 15 seconds remaining.

Opponents have outscored Buffalo in the second half in all but three games, and by an overall combined margin of 173-133.

Turnovers have also been an issue. Of the Bills’ 16 giveaways this season, nine (four lost fumbles and five interceptions) have occurred in the final two quarters.

Though Buffalo’s 299 points scored are 15 short of matching last season’s total, the Bills' largest margin of victory has been 10 points.

McDermott defended the Bills by suggesting they're not the only team that's had difficulty protecting leads this season. The Chargers, for example, are 2-5 when leading at the half.

“I think that speaks to the parity of this this league,” McDermott said. "The thing we have to get corrected is when they're self-inflicted more than anything. That, over the course of time, will get you beat."

The defense continues establishing an attacking identity after limiting the Chargers to a field goal on their final five possessions, including three ending inside Buffalo’s 30.

Ball security. Running back Devin Singletary gained 8 yards before having the ball punched loose by linebacker Nick Vigil at Buffalo’s 45 on the Bills' first possession of the fourth quarter. Two plays into Buffalo’s next drive, Allen muffed a snap at the Chargers 22. Four plays into Buffalo’s third drive of the quarter, Allen threw a weak pass off his back foot, which Michael Davis easily intercepted at his own 44.

Linebacker A.J. Klein. The offseason free-agent addition who is filling in for injured starter Matt Milano (partially torn pectoral muscle) was credited with 14 tackles and had 1 1/2 sacks.

Defensive end Trent Murphy was a healthy scratch and appears to be dropping down the depth chart behind rookie second-round pick, A.J. Epenesa.

Milano is eligible to return to practice after missing three games on injured reserve.

Buffalo travels back to Arizona for the second time in three weeks to play the San Francisco 49ers on Monday night. The 49ers were forced to relocate to to Arizona after Santa Clara County banned contact sports teams from holding games and practices for the next three weeks.