Bills have made Tom look less than Terrific last 4 meetings 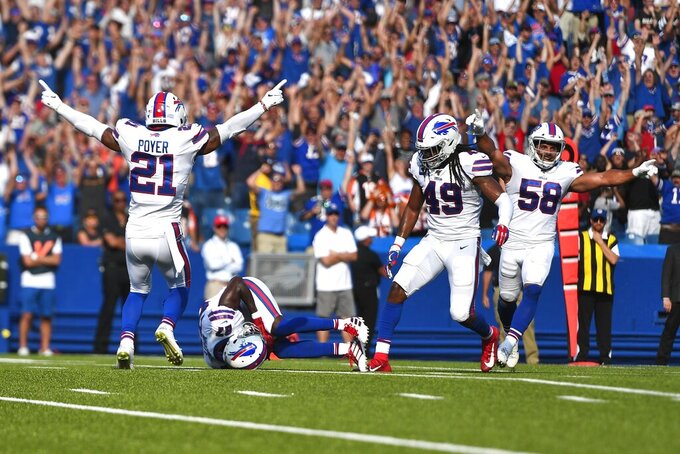 ORCHARD PARK, N.Y. (AP) — Leslie Frazier was pretty sure he knew the answer. It didn't prevent the Bills defensive coordinator from seeking a second source when asked whether he thought Tom Brady was human.

"I think he's human," Frazier said of the Patriots quarterback, who makes his annual visit to face Buffalo in a Week 4 matchup of undefeated AFC East rivals on Sunday.

Frazier then smiled and turned to a team employee and said: "Can you get his birth certificate and just make sure he's one of us?"

Brady, at 42, might well be mortal, but he's had other-worldly success against Buffalo.

His 30-3 record against the Bills is an NFL career record among quarterbacks for most wins against a single opponent. And his most recent loss — a 17-9 decision to end the 2014 season — features an asterisk because Brady only played the first half of a game that didn't affect playoff seedings.

Before anyone chalks up Brady getting win No. 31, it should be noted he hasn't exactly been Tom Terrific in the past four meetings since Frazier and coach Sean McDermott's arrival.

Though he's beaten the Bills all four times, Brady's only averaged 233 yards passing — 20 yards fewer than in his previous 29 starts — and combined for three touchdowns and four interceptions.

By comparison, Brady had four touchdowns in his final meeting against McDermott's predecessor Rex Ryan in 2016. Before 2017, he had four interceptions in his previous 10 games against Buffalo.

"It's a great style of defense because they really make the offense earn everything," Brady said of the Bills under McDermott. "They challenge you. They force you to make good plays, good decisions, good reads on a consistent basis."

Buffalo returns 10 starters from a defense that allowed the fewest yards in the NFL last season.

Safety Jordan Poyer said it's difficult to carry over confidence from one season to the next in prepping for Brady. Even watching last year's tape of a 25-6 loss in which the Patriots settled for four field goals through three quarters might not matter much.

McDermott had difficulty getting a grasp of what the defending Super Bowl champions are doing on offense because they've run away with the lead in each of their first three games.

"The game is over, pretty much all three of them, by halftime and so they're a machine," McDermott said of the Patriots outscoring opponents by a combined 106-17.

Normally, he breaks down 60-plus plays a game to judge an opponent's offensive tendencies. For the Patriots, he's been limited to about 30.

The Patriots are the NFL's first team in the Super Bowl era that hasn't allowed a rushing or passing TD through three games. While the Jets scored on an interception return and a muffed punt recovered in the end zone in 30-14 loss last weekend, the Patriots allowed just 105 yards of offense — the fewest during Bill Belichick's 347 games as Patriots coach.

Safety Devin McCourty isn't one to take notice of the buzz the defense has generated.

"We don't care what anybody writes or says about us," he said. "I bet if we pull up some clippings from last year, you guys were probably saying some of the worst things about our defense."

The Patriots' first three opponents — Pittsburgh, Miami and the Jets — enter Week 4 with a combined 0-9 record. New England has a chance to open 4-0 for the first time since a 10-0 start in 2015, and fifth time under Belichick.

Tight end Lee Smith, who returned for his second stint with Buffalo this season, is the only one on the roster to celebrate a Bills victory over Brady in Buffalo. He was a rookie when Buffalo overcame a 21-0 second-quarter deficit to beat New England 34-31 on Rian Lindell's 28-yard field goal as time expired on Sept. 25, 2011.

The Bills have lost six straight and are 5-33 against New England since 2000.

McDermott on the Patriots' ability to beat opponents with the run or pass, after Buffalo allowed 273 yards rushing in a 24-12 loss at New England last December: "It's like you wade into the ocean and you're up to your neck and the waves just keep coming."