Bills have offseason needs to address with little to spend 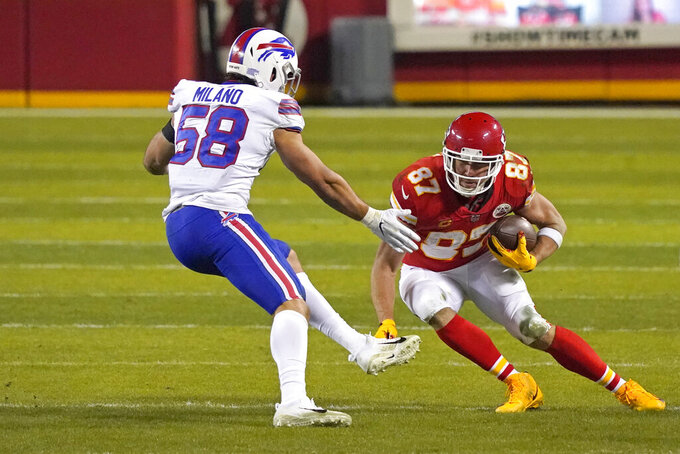 Though the Bills have needs, with the general manager specifically emphasizing a desire to bulk up Buffalo’s defensive line and improve a sputtering running attack, Beane stressed he’s going to have to be more creative — and frugal.

Like many NFL teams, the Bills will have less room to maneuver because the NFL's salary cap is expected to shrink as a result of the coronavirus pandemic.

Beane said the Bills already have close to $175 million committed to salaries next season, which is near the lowest projection of where the cap could be set once the league's new business year begins in March.

“This is not going to be a free agency that we can be aggressive,” Beane said, in an hour-long, season-ending video news conference on Wednesday. “We’ll fill in here and there some holes. But I would not anticipate any blockbuster moves.”

He's enjoyed many of those over a series of franchise-altering moves which began with Buffalo trading up to select quarterback Josh Allen in the first round of the 2018 draft, followed by signing receivers Cole Beasley and John Brown in free agency a year later, and ending with the acquisition of receiver Stefon Diggs in a trade with Minnesota in March.

The moves were critical in building the foundation of a team that enjoyed a breakthrough season in which Buffalo (15-4) won its first AFC East title in 25 years and appeared in its first conference championship since 1994.

And yet, the Bills received a sobering reminder of how much still separates them from reaching the Super Bowl following a 38-24 loss to the defending champion Kansas Chiefs on Sunday.

“They’re the gold standard,” Beane said, referring to the Chiefs. “They were clearly better than us. We definitely have work to do.”

Last offseason, following a 22-19 overtime loss at Houston in a wild-card playoff, Beane placed a priority on scoring more points, which led him to acquire Diggs for a first-round draft pick.

The move paid off immediately, with the Bills setting a team record by scoring 501 points and Diggs becoming Buffalo’s first player to lead the NFL in catches (127) and yards receiving (1,535).

This offseason, Beane cited the loss to the Chiefs as exposing Buffalo’s season-long deficiencies in being unable to consistently run the ball, and an undersized defensive front that had difficulty stopping the run and pressuring quarterbacks.

“Maybe a little more balance of the run game, and I’m not saying run it 20 times, throw it 20 times,” Beane said. “I’m just saying the ability to run it when you have to.”

Take away Josh Allen’s 88 yards rushing on Sunday, and the Bills managed just 41 against KC. Overall, Buffalo topped 100 yards rushing just nine times, including playoffs, this season, after doing so 13 times in 17 games the previous year.

Beane was careful to not fix the blame solely on running backs Devin Singletary and rookie Zack Moss, who missed the final two games with an ankle injury, by saying it was an overall team issue. Buffalo’s offensive line spent much of the season in flux as a result of injuries and production.

As for the defensive line, Beane said: “We were probably still a little light for my comfort.”

The Bills were forced to retool their front after losing Jordan Phillips in free agency and with top run-stuffing tackle Star Lotulelei unexpectedly opting out for COVID-19 reasons in July. The lack of size led to linebackers Tremaine Edmunds and Matt Milano having to fight through more blockers to stop the run.

Coach Sean McDermott expressed similar concerns a day earlier by immediately saying, “we’ve got to be able to run the football better.”

As for the defense, he expected a drop-off in production based on the offseason personnel losses and focus Buffalo placed on improving its offense and special teams. And yet, McDermott acknowledged the defense failed at times to play a complementary role.

Beane declined to get into specifics on contract-related issues regarding pending free agents or when he might open negotiations with Allen, who is entering the fourth year of his rookie contract. Buffalo also has the right to retain Allen through the 2022 season by picking up his fifth-year option this spring.

Allen is coming off a season in which he set numerous franchise scoring and passing records, and finished fourth in the NFL with a 69.2 percent completion rate, which marked a 10.4% jump over last year.

“We’d love to be able to get Milano back. He knows that,” Beane said, while noting the player has missed time because of injury in each of his past three seasons, including five games this year. “There’s going to be some tough decisions unfortunately for us, whether it’s letting guys go on this roster or having to watch guys leave.”