Bills have their swagger back in preparing to host Falcons 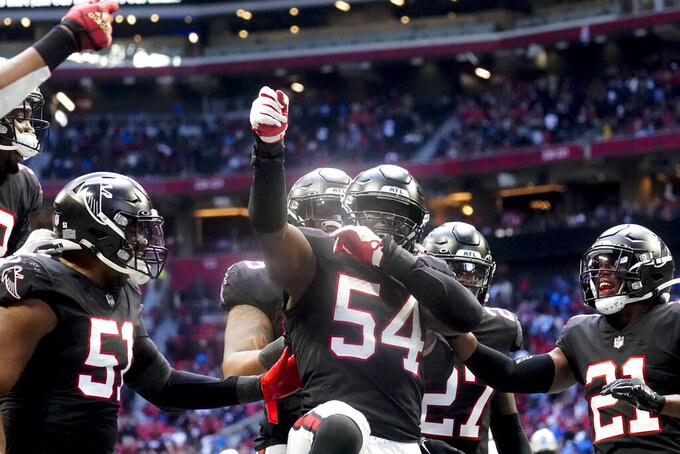 Atlanta Falcons inside linebacker Foye Oluokun (54) celebrates his interception against the Detroit Lions during the second half of an NFL football game, Sunday, Dec. 26, 2021, in Atlanta. The Atlanta Falcons won 20-16. (AP Photo/John Bazemore)

ORCHARD PARK, N.Y. (AP) — Don’t look now, but receiver Stefon Diggs is starting to get the sense the Buffalo Bills have regained their swagger.

And to think it took being down 24-3 at Tampa Bay at halftime in an eventual 33-27 overtime loss to finally wake them up three weeks ago.

“I feel like that Tampa Bay game kind of got us back to where we needed to go as far as having confidence, playing free and playing like we know how we can play,” Diggs said.

“This year, we kind of had ebbs and flows and a roller coaster. We rode it a bit,” he added. "But I think the past, I guess 10 quarters, it’s gotten back to being us.”

It’s a 10-quarter run in which the Bills have outscored their opponents 88-44, won consecutive games for the first time since Weeks 2-5, and reclaimed their edge atop the AFC East with a 33-21 win at New England last weekend.

This is no time for a letdown as Buffalo (9-6) prepares to host the Atlanta Falcons (7-8) on Sunday.

“Every week from here on out’s a playoff game, and that’s how we’re addressing this team,” quarterback Josh Allen said. ”(Atlanta) isn’t a team team that’s going to lay down. ... They’re hungry. They’re going to be fighting. And it’s two teams that want something, and we’ve got to get it.”

The Bills are in the driver’s seat needing only a win and a Baltimore Ravens loss or tie — aside from multiple other scenarios — to clinch their third consecutive playoff berth.

It’s far more complicated for the Falcons, who have to win out and hope other results fall their way to make their first postseason appearance since 2017. For first-year coach Arthur Smith, having Atlanta still in the playoff picture entering Week 17 is an accomplishment in itself for a team which began the season in transition.

“Certainly, we’ve got a lot of work to do,” Smith said. “But we have a strategy we’ve implemented and we’re seeing results at times. It’s a credit to our guys and our staff. We’re hanging around. We’re still in a meaningful game in early January.”

Despite not having won consecutive games since the middle of last season, the Falcons have displayed resolve in pulling out close victories. They’re 7-2 in games decided by eight points or less following a 20-16 win over Detroit last weekend. which Foye Oluokun sealed by intercepting Tim Boyle’s pass at the Falcons 1 with 33 seconds remaining.

Atlanta still has much to prove in a season it is 1-6 against teams entering this week with winning records. COVID-19 could also be an issue with 13 Falcons on the reserve list as of Thursday, including three outside linebackers.

They’ll be going up against a Bills team which scored points on six of seven possessions that didn’t end with a kneel-down, and became the first to not attempt a punt against a Bill Belichick-coached Patriots team. Defensively, Buffalo has allowed the fewest yards and ranks third in points given up.

Smith appreciated the challenge in being reminded he would join Jim Mora and Mike Smith as the only other first-year Falcons coach to lead the team to the playoffs.

“It would be awesome if we could do that. But it won’t matter,” Smith said. “Nothing matters unless we find a way to go beat the Buffalo Bills.”

The Bills’ reserve/COVID-19 list has been cleared of players after receivers Cole Beasley and Gabriel Davis, offensive linemen Jon Feliciano and Cody Ford, defensive end A.J. Epenesa and cornerback Cam Lewis were activated over a two-day span this week.

Starting defensive tackle Star Lotulelei is also back after missing one game for personal reasons.

Grant, a second-round pick from Central Florida, has recently taken over the top nickel cornerback duties. If he’s not available, Darren Hall and Avery Williams will get more snaps. Ta’Quon Graham has been bumped up from the second unit to fill in for Davison.

Atlanta's Kyle Pitts, the fourth overall draft pick, needs 128 yards receiving to break Mike Ditka’s NFL record by a rookie tight end. Against Detroit, Pitts had six catches for 102 yards, the best coming against tight coverage on a 35-yard reception down the right sideline in the third quarter.