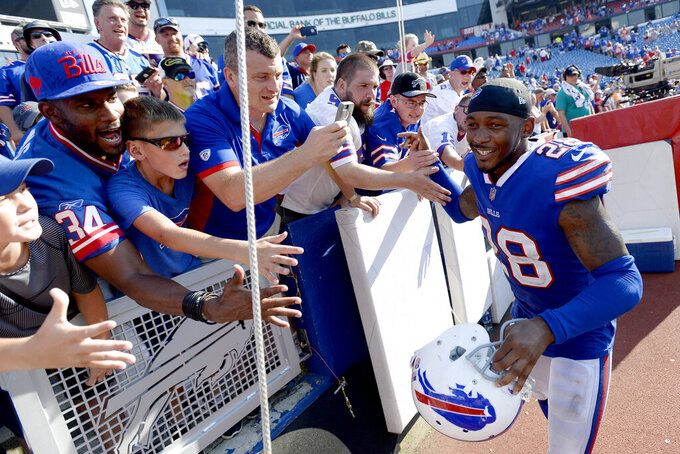 FILE - In this Sept. 24, 2017, file photo, Buffalo Bills cornerback E.J. Gaines runs by fans after an NFL football game against the Denver Broncos, in Orchard Park, N.Y. The Buffalo Bills are providing cornerback E.J. Gaines an opportunity to win back his old starting job by signing the free agent to a one-year contract. Gaines returns to Buffalo after spending last season playing for the Cleveland Browns. (AP Photo/Adrian Kraus, File)

BUFFALO, N.Y. (AP) — Cornerback E.J. Gaines is counting on a second chance with the Buffalo Bills to kick-start his career following an injury-shortened season.

"It was really a no-brainer," Gaines said during a conference call Monday after signing a one-year contract with the Bills. "I already know the game plan and everything like that, so I definitely feel I can come in here and hopefully compete for a starting job."

Gaines returns to Buffalo after spending last season with Cleveland. The 27-year-old played six games with the Browns before going on the injured-reserve list after suffering his second concussion in three weeks.

Gaines said he is fully recovered and cleared to play after visiting a specialist.

Acquired by Buffalo in a trade with the Los Angeles Rams in August 2017, Gaines was part of a revamped Bills' secondary . He started 11 games opposite then-rookie Tre'Davious White.

Besides helping the Bills end a 17-year playoff drought, he was part of secondary that allowed the second-fewest touchdowns passing with 14 and finished tied for sixth in the league with 18 interceptions.

The Bills went through a revolving door of starters in attempting to replace Gaines last season. They signed free agent Kevin Johnson earlier this month.

Staying healthy has been an issue for Gaines. He missed the entire 2015 season with the Rams because of a foot injury and five games with Buffalo due to myriad injuries.

"It's really been frustrating, and that's the main focus is making sure I can stay healthy through 16 games this year," Gaines said. "I really can't change the past and my injury history. It's part of the game. What I can do is make sure I'm ready and prepared for this year."

Overall, Gaines has four interceptions and is credited with 33 passes defensed in 43 career games, including 38 starts since being selected by the Rams in the sixth round of the 2014 draft.