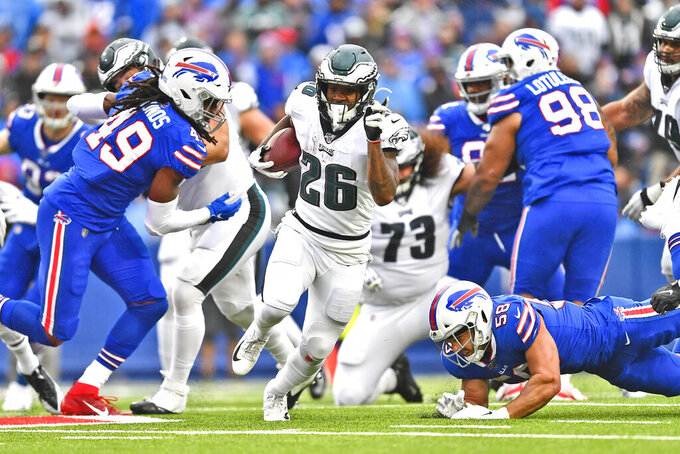 Philadelphia Eagles' Miles Sanders (26), center, breaks through the Buffalo Bills defense to score a touchdown during the second half of an NFL football game, Sunday, Oct. 27, 2019, in Orchard Park, N.Y. (AP Photo/Adrian Kraus)

"I'm pretty sure they had 10 yards in the second half of last game," the defensive tackle said, referring to Buffalo limiting Washington to 18 yards rushing over the final two quarters Sunday.

"All right, next question," Phillips said.

If only it were so easy to deem the problem solved.

Concerns are being raised not for what the Bills successfully did in the final half of a 24-9 win, but rather how the defense was trampled in allowing 327 yards rushing over the previous six quarters, including Washington's 109 in the first half.

Buffalo's run-stopping struggles actually cover the past four games in which the team has allowed 556 yards and six touchdowns. That's a significant downturn for a defense that allowed just 338 yards and three touchdowns rushing in its first four games.

Coach Sean McDermott wasn't as quick to dismiss the questions Wednesday, with Buffalo (6-2) preparing to play at Cleveland Browns (2-6) on Sunday.

"We'll see. Things just don't go away in this league. You've got to get it right," McDermott said. "Just from my experience being around it, the minute you think you have something fixed, it's not fixed. So it's an ongoing effort."

The Browns present a far more daunting test for Buffalo than an essentially one-dimensional Washington offense. Washington relied mostly on handing the ball off to Adrian Peterson to take the pressure off rookie Dwayne Haskins making his first career start.

Cleveland, by comparison, offers a balanced attack featuring running back Nick Chubb, who's fourth in the league with 803 yards rushing, and a receiving tandem of Odell Beckham Jr. and Jarvis Landry, who have both topped 550 yards.

Then there's the added dimension Kareem Hunt might present, with the league's former rushing champion eligible to return after serving an eight-game suspension.

It's enough to provide the Bills reason for pause.

Buffalo was able to eventually shut down Peterson by simply positioning an eighth defender closer to the line of scrimmage. The same approach is risky against the Browns because it leaves one less defender in coverage.

"We've got to mix it up a lot more and not just line up and be stagnant, because they do have the talent to take advantage if you're just in an eight-man front," linebacker Lorenzo Alexander said. "So we will mix it up but at the same time, we're not going to allow them to dictate to us what we want to play."

Buffalo's struggles against the run coincide with second-year tackle Harrison Phillips sidelined by a season-ending knee injury in Week 3. Phillips' spot in the lineup remains in flux.

Liuget spent his first eight seasons with the Chargers developing a reputation for his penetrating ability and making tackles behind the line of scrimmage. He practiced Wednesday, though it's too early to determine whether he'll play this weekend.

Liuget's addition raises another question mark, because it has the potential of further cutting into rookie defensive tackle Ed Oliver's playing time. After averaging 40 snaps in starting each of Buffalo's first seven games, the first-round pick played just 18 snaps as a backup against Washington.

Defensive coordinator Leslie Frazier called the decision to cut back Oliver's playing time as a chance for the 21-year-old to take a step back and gain perspective.

"I don't think it'll detour his progress," Frazier said. "It should help him as we go along."

Oliver took the demotion in stride, while acknowledging he's frustrated with his lack of production. Though he's first among the team's defensive linemen with 20 tackles, he has only one sack and four quarterback pressures.

"It's not like I'm not winning, the stats just aren't there," Oliver said. "I look at it as a challenge, one, and two, as motivation."

Jordan Phillips, who has a Bills-leading six sacks, has been the biggest beneficiary in gaining more playing time.

When it comes to run defense, Phillips shrugged when reminded how Buffalo allowed a season-worst 218 yards rushing to the Eagles in a 31-13 loss by saying: "It's a good thing that happened two weeks prior. We've seen it. We know what to do."

He's not concerned about a recurrence.

"We'll see when we get there, that's all I can really say about it," Phillips said. "We'll put it on film, and then you guys can ask about it afterward."

NOTES: Buffalo signed LB Tyrel Dodson and OT Brandon Hitner to the practice squad, while releasing DE Wyatt Ray. ... Dodson was cut by Buffalo on Monday, after his roster exemption expired. He served a six-game suspension as a result of an alleged altercation with his girlfriend at her home in Scottsdale, Arizona. Dodson agreed to enter a diversion program and must also meet other conditions to have the charge cleared from his record.