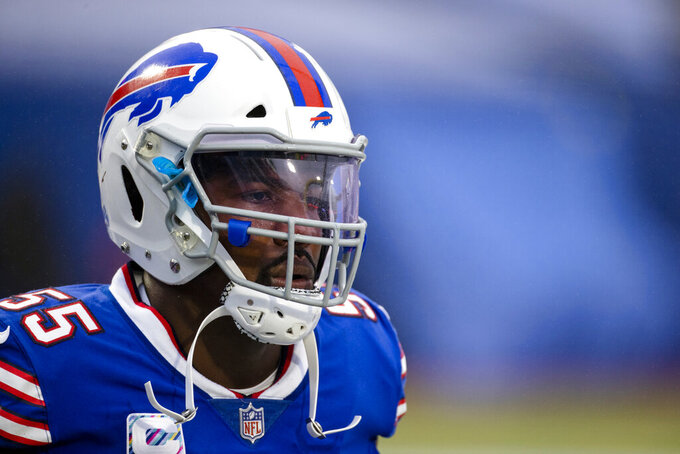 FILE - In this Oct. 19, 2020, file photo, Buffalo Bills defensive end Jerry Hughes (55) warms up before an NFL football game against the Kansas City Chiefs in Orchard Park, N.Y. At 32, the Buffalo Bills defensive end might no longer be the angry young man of his youth, when his various on-field eruptions would intimidate opponents and teammates alike, and undisciplined personal fouls aggravate coaches. (AP Photo/Brett Carlsen, File)

At 32, the Buffalo Bills defensive end might no longer be the angry young man of his youth, when his various on-field eruptions would intimidate opponents and teammates alike, and undisciplined personal fouls would aggravate coaches.

Hughes insists he maintains a healthy capacity for volatility, which he considers a critical personality trait in getting him this far in an 11-year NFL career and eighth season n Buffalo.

What's different is how he's chosen to channel his Mr. Hyde alter ego — the one former teammate Kyle Williams once affectionately dubbed as “Gary” — for the greater good in emerging as one of the team’s unquestioned leaders.

“Getting older,” Hughes said. “And wiser.”

Rather than being easy for someone more accustomed to leading by example on the field than vocally in the locker room, Hughes considered his change in approach necessary. He is filling a void following the departures of Williams and linebacker Lorenzo Alexander over each of the past two seasons.

“At some point in time, a leader has to be vocal to let the guys know this isn’t right, or to be vocal enough to congratulate someone, pick someone up when their heads are down,” he added, crediting Williams and Alexander for providing valuable lessons. “So now it’s my turn.”

Hughes is the Bills' longest-tenured player after being acquired in a trade with Indianapolis in 2013, and his 50 1/2 sacks rank fifth on the team list, just two behind Cornelius Bennett. With the AFC East-leading Bills (7-3) entering their bye week off, Hughes’ impact has been notable on a defense that spent the first six games searching for an identity.

The change in the defense’s trajectory occurred following consecutive losses to Tennessee and Kansas City. The Bills adopted more of an attacking approach, which coordinator Leslie Frazier said was prompted by Hughes, who has combined for four sacks, two forced fumbles and an interception in his past four outings.

“We didn’t talk about things that needed to be done with the D-line, it was more Jerry taking it upon himself as a leader to pull those guys together,” Frazier said following an 18-10 win over the New York Jets for which Hughes earned AFC top defensive player honors.

“Jerry was so positive, and encouraging his teammates on the sideline,” he added. “I remember saying to myself, `Man, that’s what you need out of one of your star players who’s a leader.‘”

It wasn’t always like this for Hughes, who began his NFL career compiling more grudges for every perceived slight than sacks.

It began with Hughes waiting until the 31st pick to be drafted by the Colts in 2010. It continued upon his arrival in Indianapolis, where he spent three seasons mostly stewing on the sideline watching linebackers from the same draft class, Pat Angerer (selected 63rd) and Kavell Conner (240th), start ahead of him.

“Absolutely, angry at the world,” Hughes said. “I felt like I was forgotten, or people didn’t respect me or the coaches who drafted me really didn’t want me in the building. It was everything. I felt like it was me against the NFL.”

His attitude didn’t change much upon being traded to Buffalo. He turned his inner frustrations outward when it came to overpowering opponents or letting his emotions fly in fits of rage during practice.

Many of Hughes’ current and former teammates can recollect when they first encountered “Gary.”

“Every word that came out of his mouth was a curse word,” White said. “They kicked him out of practice, and he was on the sideline by himself and he was still cursing everybody out. ... I thought he was crazy. And then I heard Kyle say, `Well, there goes Gary.‘”

Alexander recalled his first Bills training camp in 2016, when Hughes wound up in the middle of a skirmish.

“I’m trying to break guys up and then he turned on me,” Alexander said with a laugh. “And I was like, `Woah, woah, woah. I’m with you bro!‘”

And yet, Alexander also understood there was more to Hughes than bubbled above his prickly surface.

“Most people see `Gary,’ the guy that shows up on game day ready to get after you and talk crazy and just go 100 miles an hour,” he said. “But I had the unique experience of getting to know him at home, and seeing some other characteristics in the questions and conversations that we would have.”

In many ways, Alexander said, Hughes always had the potential of being a leader, but didn’t need to on a team anchored by Williams’ unquestioned presence.

“He could have done this easily last year, but I think he deferred to me in a lot of ways,” he added. “It’s not that he’s mellowing. He’s maturing.”

In reality, Hughes is a big softie, Alexander said, recalling hosting a charitable function in which children built robots out of Lego blocks.

“You would have thought he was one of the 10-year-old kids in there competing,” Alexander said. “He ended up donating $20,000 because of the impact it made on those kids that day. Things like that, people don’t know about.”

So long as he’s playing, Hughes won’t ever lose his volatile alter ego.

Given the chance, though, he would have a few words of advice for his angrier, younger self.

“A lot of 23-year-old me, I had my head down,” Hughes said. “I’d say, `Keep your head up and stay focused. Anything can happen. Be very optimistic.’”