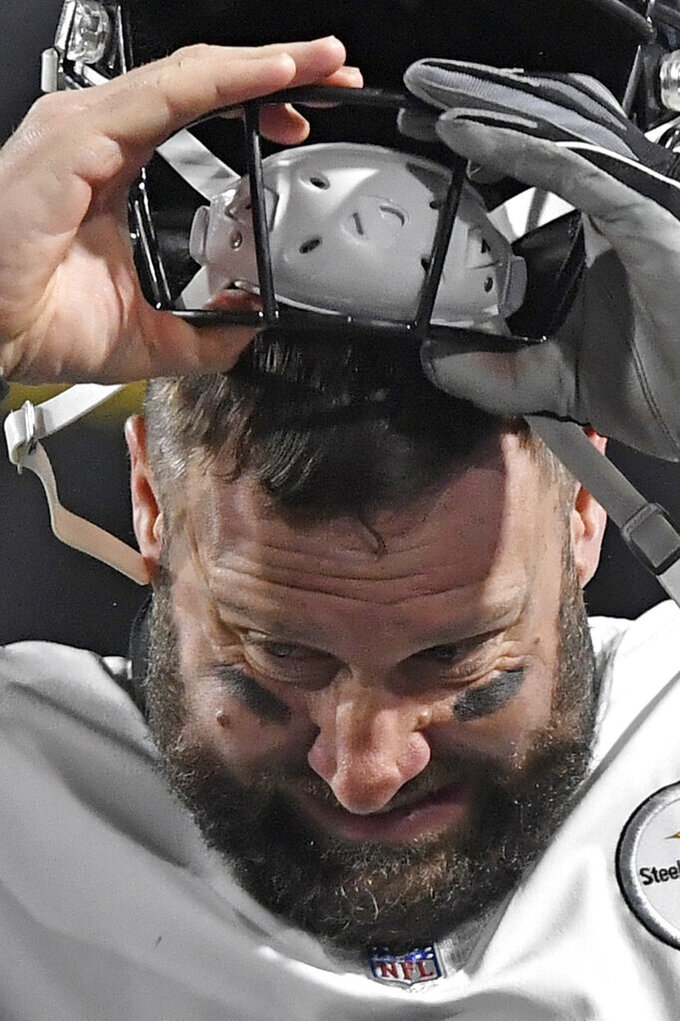 Pittsburgh Steelers quarterback Ben Roethlisberger takes off his helmet on the sideline during the second half of an NFL football game against the Buffalo Bills in Orchard Park, N.Y., Sunday, Dec. 13, 2020. (AP Photo/Adrian Kraus)

Come the fourth quarter, after Levi Wallace intercepted Ben Roethlisberger to essentially seal Buffalo's 26-15 victory, it was the Bills' turn to break out into a dance along their sideline.

“It was tight energy. The song playing. We felt the momentum of the game swing,” Poyer said, before noting a TikTok video of Smith-Schuster posted on social media.

“I ain’t going to lie, seeing them dancing on our logo pregame, that turns you up a little,” he added. “You come and play with a little extra fire. We were hyped up on the sideline. We had a big win and we were having fun.”

Smith-Schuster and the Steelers weren’t asked about the dance — something the receiver does before most every game — afterward.

Then again, they have other concerns after dropping consecutive games in six days following a 23-17 loss to Washington, and falling a game behind the AFC-leading Kansas City Chiefs (12-1).

The AFC North-leading Steelers (11-2) were still able to clinch their first playoff berth in three years before kickoff by virtue of the Miami Dolphins’ 33-27 loss to Kansas City earlier in the day.

The Bills have won six of seven and have at least 10 of their first 13 games of a season for the first time since 1991. That’s a considerable switch from a team that had endured a 17-year playoff drought -- which stood as longest active streak in North America’s four major professional sports -- before coach Sean McDermott took over in 2017.

The third-year player broke the game open by throwing touchdown passes 3:21 apart — a 19-yarder to Stefon Diggs and a 13-yarder to rookie Gabriel Davis — on the first two drives of the second half to put Buffalo ahead 23-7.

Johnson, however, provided the offense by stepping in front of Roethlisberger’s pass intended for Smith-Schuster and returned it 51 yards to put Buffalo up 9-7 with 52 seconds remaining in the first half.

“Our defense stepped up big time, especially when we started out the way we did,” Allen said. “We’ve got a lot of guys that care about each other and we don’t want to let each other down. When we’re out there, we put it on the line for each other.”

Allen upped his season total to 35 combined touchdowns (28 passing, six rushing and one receiving) to break the team’s single-season record of 34 set by Hall of Famer Jim Kelly in 1991. His 28 TDs passing rank second most on the team list, and five behind the single-season record set by Kelly in ’91.

Allen finished 24 of 43 for 238 yards and an interception. Diggs had 10 catches for 130 yards. Acquired in a trade with Minnesota in March, Diggs now has 100 catches to match the Bills’ single-season record set by Eric Moulds in 2002.

The Steelers continue to resemble nothing of the team that set a franchise record by winning its first 11 games. Pittsburgh has been held under 20 points in three straight games, and was coming off a loss to Washington in which coach Mike Tomlin called out his team’s sluggish running attack and receivers for their dropping passes.

The game was decided midway through the fourth quarter after Buffalo’s Tyler Bass hit a 23-yard field goal to put the Bills up 26-15.

On Pittsburgh’s third play from scrimmage, Roethlisberger’s deep pass up the right sideline intended for James Washington was intercepted by Wallace.

Roethlisberger finished 21 of 37 for 187 yards with touchdown passes to Washington and JuJu Smith-Schuster and two interceptions.

The Steelers extended their sack streak to a 70th consecutive game to break the NFL record set by the Tampa Bay Buccaneers from 1999 to 2003.

Tyson Alualu was credited with Pittsburgh’s first sack of the game against Buffalo by stripping the ball out of the hands of Allen midway through the second quarter. The fumble was recovered by Bills center Mitch Morse for an 8-yard loss.

Bills: Johnson did not return after sustaining a concussion in the third quarter. Morse missed several series in the first quarter after having a brace place on his left elbow.