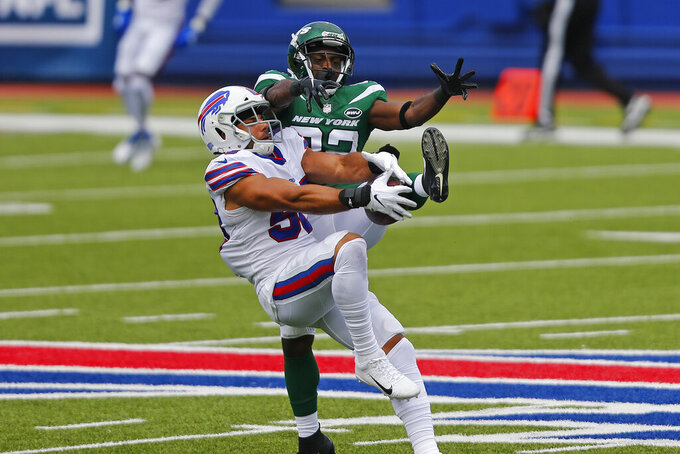 Coach Sean McDermott wouldn’t provide an update on the players’ status other than to say they were receiving treatment after getting hurt in a season-opening 27-17 win against the New York Jets.

Milano, who hurt his hamstring, was not present for the portion of practice open to the media. He's Buffalo's starting weak-side linebacker, and had a leaping interception of Sam Darnold's pass in the second quarter on Sunday.

Edmunds, a middle linebacker who hurt his right shoulder, wasn’t wearing pads but took part in the stretching period.

Defensive coordinator Leslie Frazier on Monday indicated one of the two could be healthy to play, without specifying which player.

The status of backup linebacker Del’Shawn Phillips is also uncertain after he hurt his quadriceps. Phillips watched practice from the sideline.

The injuries thinned Buffalo's depth at linebacker in finishing the game with A.J. Klein, Tyrel Dodson and Tyler Matakevich. Buffalo also has linebacker Andre Smith available for promotion off the practice squad.

Starting receiver John Brown also missed practice due to a foot injury. McDermott, who spoke before practice began, did not list Brown among the team’s injured players.

Brown had six catches for 70 yards and a touchdown against the Jets.