Bills knock out Tua, roll past Dolphins yet again, win 35-0 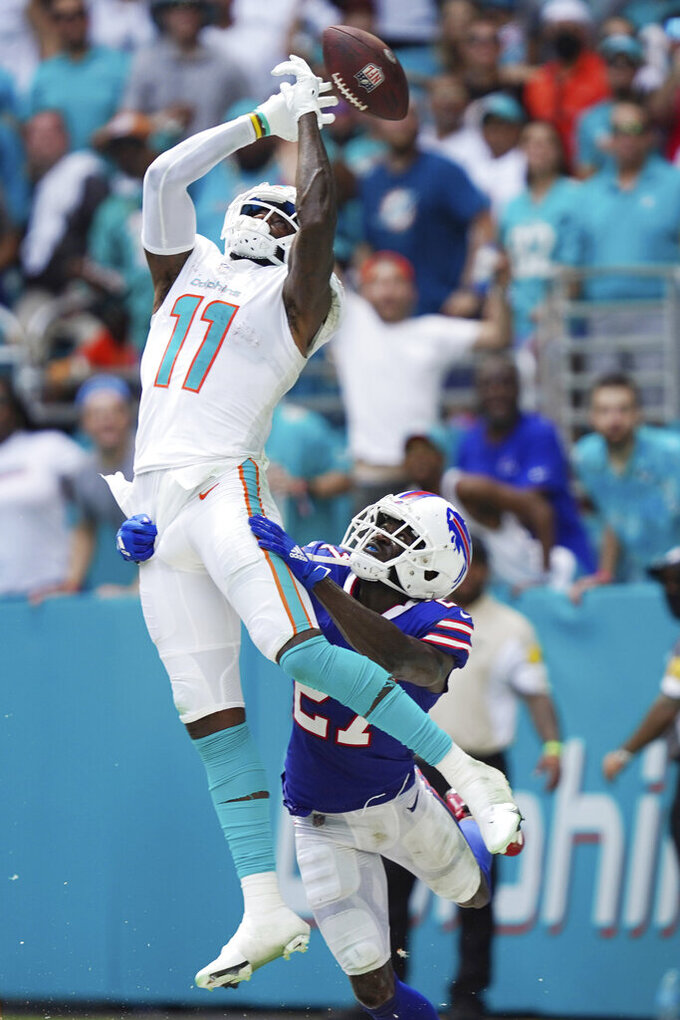 Buffalo Bills cornerback Tre'Davious White (27) defends Miami Dolphins wide receiver DeVante Parker (11) as he can't hold onto a pass in the endzone, during the first half of an NFL football game, Sunday, Sept. 19, 2021, in Miami Gardens, Fla. (AP Photo/Hans Deryk) 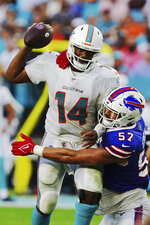 MIAMI GARDENS, Fla. (AP) — Another Buffalo-Miami game, another lopsided Bills victory. And this one might wind up hurting the Dolphins more than most of the others.

Josh Allen threw two touchdown passes, Zach Moss ran for two scores and the Bills knocked out Miami quarterback Tua Tagovailoa early with a rib injury on the way to a 35-0 win on Sunday.

Devin Singletary rushed for 82 yards and another touchdown for the Bills (1-1). Buffalo has won six consecutive games in the series, doing so by an average of 20 points. This marks only the second time the Bills have won six in a row against the Dolphins (1-1).

“I saw a hunger in our football team this week," Bills coach Sean McDermott said. “We’ve got plenty to work on, though, and that’s what we have to get back to. Try to improve every week, that’s the goal.”

Added Bills safety Micah Hyde: “We were men on a mission this week."

The last time the teams met was in Buffalo to end last season, a 56-26 romp by the Bills. This, somehow, was worse for Miami. It was the second-worst shutout loss by the Dolphins at home, topped only by a 43-0 defeat to New England in 2019.

“I think as a team we all struggled," Dolphins left tackle Austin Jackson said. “Clearly."

Tagovailoa lasted only two series, knocked out of the game on a failed fourth-down play near midfield where Buffalo’s A.J. Epenesa blew past Dolphins right tackle Jesse Davis and was at full speed when he launched into Miami’s quarterback. Tagovailoa needed a couple tries just to get to the sideline, was carted to the locker room not long afterward and didn’t return.

Tagovailoa was having tests performed, a process that will continue into Monday, Dolphins coach Brian Flores said.

Tagovailoa got sacked twice on a three-and-out opening possession, setting up a punt and Buffalo taking over with a short field. Singletary scored on a 46-yard run, the second-longest score of his career, on Buffalo’s second play from scrimmage.

The next drive ended when Tagovailoa got hurt. Buffalo took the ball and before long Allen found Stefon Diggs — running away from Xavien Howard, who lost a shoe — in the back of the end zone for a quick 14-0 lead.

Miami’s defense tightened for the rest of the half, yielding 38 yards and no points on Buffalo’s next six possessions. But Buffalo made it 21-0 when Allen found Dawson Knox for a score on the first possession of the third quarter, and Moss scored twice in the fourth.

“We came in with guys who were focused," McDermott said. “Obviously we didn’t like how the game went a week ago, so you’ve got to respond."

Bills: CB Levi Wallace was dealing with leg cramps in the first half, on a humid day where the heat index was near 100 degrees. LB Tremaine Edmunds was not on the field to begin the second half, also because of cramps.

Dolphins: Besides Tagovailoa, Miami also saw WR Jakeem Grant leave in the first half with an ankle injury. Davis also was diagnosed with a knee injury.

Not a good weekend for football in South Florida. The Miami Hurricanes lost 38-17 to Michigan State on Saturday and that, combined with Buffalo's rout, makes this the first time where the Hurricanes and Dolphins both lost by at least 21 points at home on the same weekend.

Allen went over the 10,000-yard passing mark for his career, the sixth player to do so for the Bills. He hit the milestone — he was only 23 yards shy entering Sunday — in his 45th start, matching the number of starts that Hall of Famer Jim Kelly needed to throw for that many in his Buffalo days.

Bills: Buffalo returns home to face Washington next Sunday, the first meeting between those teams since a 24-9 Bills win in 2019.