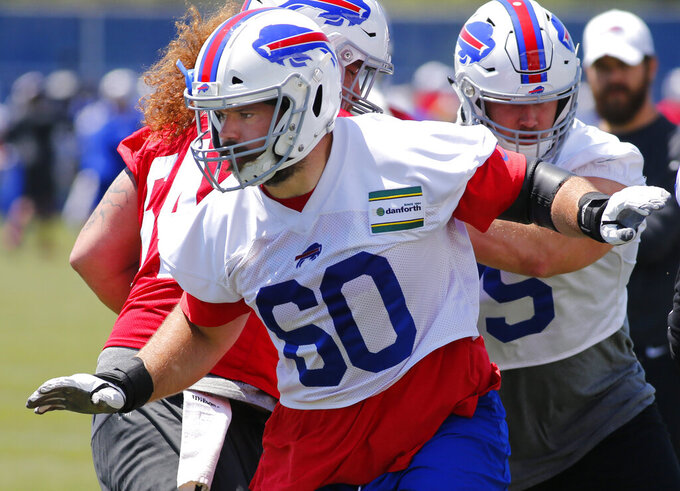 FILE - In this June 11, 2019, file photo Buffalo Bills offensive center Mitch Morse (60) runs drills during an NFL football team practice in Orchard Park N.Y. Morse is confident he’s ready to play and isn’t concerned about experiencing any setbacks upon consulting with numerous specialists in recovering from his fourth documented concussion. Morse spoke following practice Monday, and after he was cleared to play upon being released from the NFL’s concussion protocol late last week. (AP Photo/Jeffrey T. Barnes, File)

ORCHARD PARK, N.Y. (AP) — Bills center Mitch Morse lost track of how many specialists he consulted over the past month since sustaining the fourth concussion of his NFL career.

The one thing he's sure of is the prognoses have all been the same in reassuring Morse he shouldn't experience any setbacks in preparing for the Bills' season opener at the New York Jets this weekend.

"I've talked to every expert known to man," Morse said following practice Monday. "And we've done all the tests you can freaking think of. And every one was just tip top, and all the specialists said I'm going to be just fine."

That's good enough for Morse, who said he's put behind whatever initial frustrations and reservations since a teammate accidentally kneed him in the side of the head during Buffalo's first padded practice of training camp on July 27.

"I'd be honest with you, it's one of those things you wonder, 'Why is this me? Am I damaged goods? What's happening?'" said Morse, who sustained three concussions during his first four seasons with Kansas City before signing with Buffalo in March.

"And when you get past that, and you realize that you're not, and a few of these are just happenstance and you got the short end of the straw and you're not putting yourself in extra harm, I think that was huge," he added.

"When you come to cope with the realization that if this happens again, I'll be fine, it's just one of those things that you've got to come to a realization with and come to peace with, and we are."

Morse said his first two concussions were the result of him not wearing a mouthpiece and also using a helmet since banned by the NFL. He said the past two, including one that sidelined him for five games last season, were unavoidable.

"No one can 100% guarantee anything," he said. "I know I speak for myself, and I feel very confident that I'm going to be just fine in the future."

Cleared from the NFL's concussion protocol late last week, Morse is focused on catching up on plenty of lost time in his role anchoring a retooled offensive line expected to feature four new starters. Aside from the time he missed recovering from the concussion, the 27-year-old also sat out most of Buffalo's spring practices recovering from surgery for a core muscle.

That's not what he or the Bills expected in March, when Buffalo made him the league's highest-paid center by signing him to a four-year, $44.5 million contract.

"It's one of those things we can hopefully look back on in a few years and kind of laugh about," Morse said. "But at this point, it really is about getting to game speed, and I feel like we've been able to do that."

In the spring, Morse used his downtime to study film and pore through the offensive gamebook. Last month, as the concussion symptoms lessened, Morse was eventually allowed to take part in walk-through practices and attend meetings.

Now it's a matter of what he called "knocking some rust off" and continue building chemistry with what's mostly an entirely new offense under second-year quarterback Josh Allen.

"Yeah, it's what you came here to do," said Morse, who in June lamented he felt as if he wasn't earning his salary on the sidelines. "It truly is an emotional thing to think about getting out there with the guys and finally being able to do the activity that brought you to Buffalo."

Jon Feliciano, who has filled in at center and guard, called it integral to have Morse back on the field so the linemen can begin adapting to his preferences in calling out pre-snap blocking assignments.

"It's one thing to watch it on film and say, 'Mitch, what would you like me to do there?'" Feliciano said. "This is his third or fourth practice back, so it's been great to be able to get the little things down."

Running back Frank Gore welcomed back Morse, in noting the entire offensive line is finally together after several players were sidelined.

"We've got everybody here now," Gore said. "Now we can see what we have and just keep growing."

NOTES: Coach Sean McDermott hasn't decided whether rookie Cody Ford will start at right guard or right tackle after splitting time at both spots the past month. ... TE Tyler Kroft was the only Bills' player limited in practice. Kroft has been out since breaking his right foot in May. ... QB Davis Webb, who was released by the Jets on Saturday, LB Nate Hall and WR Tyron Johnson were signed to Buffalo's practice squad.