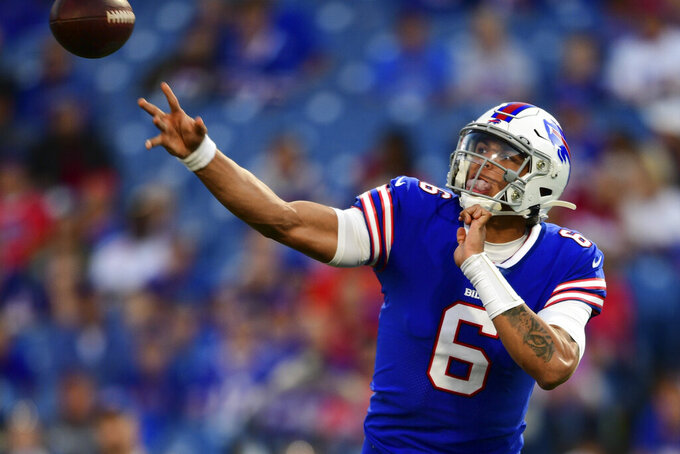 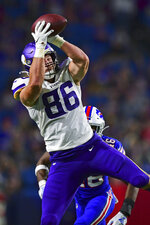 ORCHARD PARK, N.Y. (AP) — Aside from a stunning comeback to close Buffalo's first perfect preseason in franchise history, the Bills have even more promising news on the horizon.

General manager Brandon Beane announced during Buffalo's 27-23 win over Minnesota on Thursday that starting center Mitch Morse has been cleared after spending the past month in the NFL's concussion protocol.

Morse was Buffalo's key free-agent addition in an offseason overhaul of the offensive line. Aside from missing a majority of training camp, he also missed a large portion of spring practices while recovering from surgery to repair a core muscle injury.

And Beane added tight end Tyler Kroft has a chance to start the season on the active roster given the progress he's shown recovering from a broken right foot sustained in May. Beane said he will first consult with doctors Friday before determining whether Kroft will be added to the roster or open the season on the physically unable to perform list, which would sideline the player for at least the first six weeks of the season.

On the field, undrafted rookie Tyree Jackson hit David Sills for an 8-yard touchdown pass with 8 seconds left to cap Buffalo's run of scoring three touchdowns in the final 3:53 to overcome a 23-6 deficit.

The rally began with Jackson scoring a 6-yard run followed by Marcus Murphy scoring on a 79-yard punt return. Jackson's touchdown was initially credited to Victor Bolden, who recovered the quarterback's fumble in the end zone.

"It was awesome," said Jackson, who came out of college after his junior season at Buffalo. "It's something I'll remember for a long time, coming back and winning like that."

Facing third-and-goal, Jackson stayed patient in the pocket and threaded a pass to Sills cutting across the middle.

Jackson finished 22 of 33 for 175 yards, and had a team-best 78 yards rushing in playing the entire game.

Receiver Laquon Treadwell caught all three passes directed his way for 30 yards in what could be the 2016 first-round draft pick's final appearance with the Vikings.

While the Vikings rested their starters, Treadwell played the entire first half amid speculation he could be traded or cut by Saturday, when NFL teams are required to set their 53-player rosters. Treadwell has been passed on the depth chart by Chad Beebe, Jordan Taylor and Jeff Badet after three mostly unproductive seasons since the Vikings selected him with the 23rd pick in 2016.

"I'm not really worried about that now," Treadwell said, referring to his uncertain future.

As for what he might read into playing the fourth preseason game while numerous teammates rested, Treadwell said it might a combination of reasons.

"More reps. They want to see more out of you and also they can be up in the air with the decision. I really don't know," he added. "Everybody's fighting for a job. Everybody's going out there giving it their best, and let the best man win."

"I don't think you can read too much into that," Zimmer said. "Looked like he did well. Last couple of games, he had opportunities to make plays and he's done it."

Treadwell caught Sloter's first attempt for 14 yards and also converted a third down by making a 9-yard catch on a crossing pattern. He finished the preseason with eight catches for 89 yards.

Acquired by Minnesota for a fifth-round pick from Baltimore in a trade earlier this summer, Vedvik has mostly struggled. A week after missing from 43 and 54 yards, Vedvik pushed a 37-yard field goal attempt wide right against Buffalo. He finally connected on a 27-yarder in the final minute of first half.

Vedvik, who is also challenging Matt Wile for the punting duties, punted twice, including a 45-yarder which Murphy returned for a score.

"Was it tough? I'm not sure how to answer that," Vedvik said.

Asked to assess Vedvik's chances of making the team, Zimmer said: "It's good. We're going to evaluate everything these next two days and make our decisions and go with it."

Beane praised receiver Duke Williams' preseason performance on the Bills' telecast, but stopped short of saying the former CFL star has made the team.

"He's earned everything he's got," Beane said of Williams, a free agent addition. "When the ball's in the air, I'll take him over about anybody, he's going to find a way to come down with it."

Beane would only say Williams is "definitely in the mix" for one of the team's final few receiver spots.