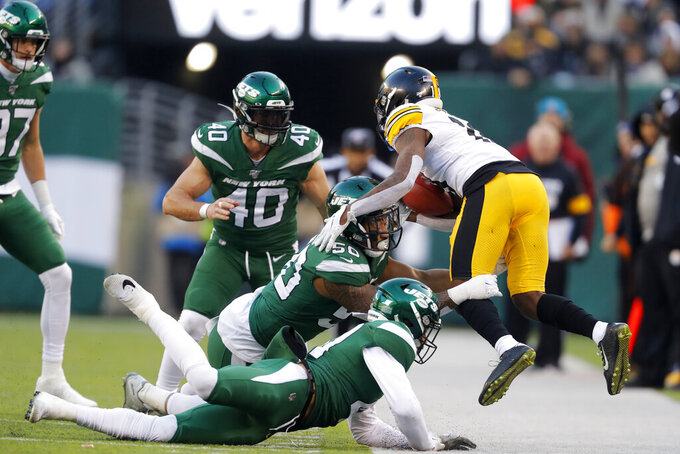 As much as he wishes he could, McDermott noted he can't rest all of his starters in what is essentially a meaningless game for the playoff-bound Bills (10-5), locked in as the AFC's fifth-seeded team. At the same time, McDermott isn't going to take many unnecessary chances against a Williams-coached Jets defense.

"I don't want to go any further with that other than to say that you always factor in to me who you are playing," McDermott said.

In putting the officials on notice, McDermott wouldn't reveal which players he might rest — with the exception of noting second-year quarterback Josh Allen will start before eventually being replaced by Matt Barkley.

Williams is a former Bills coach and long-time NFL defensive coordinator whose aggressive approach has translated to his defenses occasionally blurring the line between fair and dirty play. The most notable example came in 2012, when the NFL suspended Williams for the entire season for his role in the bounties scandal in New Orleans.

The Jets (6-9) have little to play for except an opportunity to avoid a fourth-consecutive finish with 10 or more losses.

"We're coming after them. We're hunting them, man," Adams said. "At the end of the day, it's a playoff game for us."

If anything, Williams has done an admirable job in his first season in New York. The Jets defense ranks seventh in fewest yards allowed despite missing numerous starters to injury, including linebacker C.J. Mosley, and trading away defensive lineman Leonard Williams.

This is also a defense that still might be smarting from a season-opening 17-16 loss to Buffalo. The Bills overcame a 16-0 deficit by scoring 17 points on three consecutive possessions spanning the third and fourth quarters. Mosley was out of the game by then.

One reason McDermott isn't sitting Allen entirely is to see if his young quarterback can shake a season-long trend of slow starts. Allen has twice over the past month acknowledged experiencing early-game jitters, including a 24-17 loss at New England last week.

The Bills have scored a touchdown once, in a 24-9 win over Washington on Nov. 3, and added four field goals on their opening drives this season. Otherwise, they've punted seven times, turned the ball over twice and also had one end on downs.

"That's where this week can help us, too: pregame routine, pregame ritual, Josh knowing himself," McDermott said.

The Jets have opened games by scoring on their first possession seven times this season, including five touchdowns and two field goals.

That comes after New York snapped a skid during which it went 30 consecutive games without getting into the end zone on its opening drive. The Jets’ 40 points on opening possessions lead the league over the last nine games.

He stressed, however, he has no rooting interest in which team it might be.

"I've been around where you wish, you hope it's this team and you play team X, and you're sorry you played that team," McDermott said. "So I've just learned whoever they put, that's who we play."

New York has the No. 2 overall rushing defense, holding opponents to 87.9 yards per game. That's second only to Tampa Bay which has given up just 72.9 yards rushing per game under defensive coordinator Todd Bowles, who was Jets coach the last four seasons before being fired in January.

The Jets have allowed one individual 100-yard rusher this season: Dallas’ Ezekiel Elliott, who had 105 in Week 6.

New York’s 109 tackles for no gain or negative yardage, excluding kneeldowns, lead the NFL, according to radar360.

Bills linebacker Lorenzo Alexander said he's not had a change of heart regarding his plans to retire after his 13th NFL season, but stressed he doesn't want to be a distraction.

“I'll address that after the season. I think for me, at least, it's a little disrespectful to my teammates to talk about being done when we still have two games guaranteed," Alexander said.